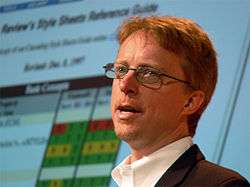 Eric A. Meyer is an American web design consultant and author. He is best known for his advocacy work on behalf of web standards, most notably Cascading Style Sheets (CSS), a technique for managing how HTML is displayed. Meyer has written a number of books and articles on CSS and given many presentations promoting its use.[1]

Meyer was born to parents Arthur and Carol Meyer (deceased).[2] He now has a stepmother, Cathy.[3]

Meyer graduated from Case Western Reserve University in 1992 with a BA in History, and minors in artificial intelligence, astronomy, and English.[4]

He is married to Kathryn Meyer (née Fradkin) and has two living children, Carolyn and Joshua Meyer. His daughter Rebecca Alison Meyer died on June 7th, 2014 on her 6th birthday, less than a year after her diagnosis of grade 3 (anaplastic) astrocytoma, a brain tumor.[5][6] The hex color #663399      was named "rebeccapurple" and added to the CSS color list in her memory.[7]

From 1992 to 2000, Meyer was employed as a hypermedia systems manager at CWRU. In 2001, he joined Netscape as an Internet applications manager and remained with the company until 2003.

Meyer is currently a consultant for Complex Spiral Consulting as well as a founding member of the Global Multimedia Protocols Group.

On July 28, 2005, the S5 format and software was placed in the Public Domain by Eric Meyer.

In 2008, Meyer supported a Microsoft proposal for Internet Explorer 8 related to backwards compatibility modes for rendering invalid HTML and other markup.[8]