This article is about Netscape Browser version 8. For an overview of all versions of the Netscape web browser software, see Netscape (web browser).

Netscape Browser (or Netscape 8) is the eighth major release of the Netscape series of web browsers, now all discontinued. It was published by AOL, but developed by Mercurial Communications, and originally released for Windows on May 19, 2005.

As with other recent versions, it incorporates support for AOL Instant Messenger, and other AOL-related features.

Netscape Browser was succeeded by Netscape Navigator 9, which reverted to the Navigator name. 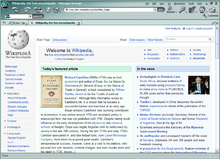 The browser was finally released on May 19, 2005. A minor update known as version 8.0.1 was released a few hours later to incorporate the key security patches added in Firefox 1.0.4. 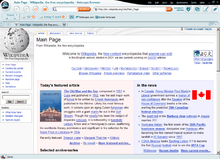 Perhaps the most noteworthy feature introduced in Netscape Browser is the ability to use either of two layout engines to render websites — either Internet Explorer 6's Trident layout engine or the Gecko engine used by Mozilla and its derivatives. This is used as part of the browser's "Site Controls" system, which allows security settings to be altered on a per-site basis, and is also touted as a defense against phishing and similar attacks, with both blacklists and whitelists built in and automatically updated regularly. This system decides whether a site is "trusted" or "suspect", while only whitelisted sites use the Trident engine by default.

However, this feature is actually implemented by using the IE ActiveX control, which is composed of most of IE's architectures.

Other features highlighted by AOL's publicity include improved tabbed browsing abilities, a toolbar system called the "MultiBar," which includes up to 10 toolbars in the space of one, and extra support for "Live Content", such as RSS feeds. In keeping with the security emphasis, a new secure form information and password management system, known as a "PassCard," which saves usernames and passwords for individual sites, is also included.

In Netscape version 8.1, the Security Center feature is much more integrated into the browser, and extra features, such as ID Theft Protection and Spyware Protection have been integrated.

There are multiple smaller features included, including a shortcut menu that appears when text is selected to paste the selected text directly into a search engine of choice.

Finally, the browser includes a pop-up advertisement blocker which can be configured to allow pop-ups for individual sites, block only unrequested pop-ups, and open any pop-ups in new tabs in one window, thus preventing pop-unders.

The Netscape Browser has been criticized for various reasons. Perhaps the most severe is the claim that, in contradiction to its claimed emphasis on security, its use of both the Trident and Gecko rendering engines means it unavoidably inherits all the vulnerabilities of both engines, making it potentially less secure than either Firefox or IE on their own.

The switching between rendering engines may also confuse users, since the web browsing experience is very different depending on which is used. A standards based website will generally render better in Gecko thanks to its better standards support, but Netscape Browser renders whitelisted pages using Trident instead. "As the switching is transparent to the user, users are left wondering why their experience changes randomly across different websites".

The optional theme "Fusion" has also been criticized because it does not conform to the Microsoft human interface guidelines (HIG), either "Luna" or "classic" style, although the default theme, "Winscape", looks more like a traditional Windows application. There is also a claim that the usability of the browser is reduced by not obeying standard Windows manipulations. Similarly, the excessive nesting of tabs has been cited as a sign of generally poor interface design. The installation program of Netscape 8.12 prompts the user into which theme would be preferred, with the traditional "Winscape" being checked by default.

Some users have argued the formerly included email client and HTML editor were more valuable as part of the browser package than new features such as a live weather report and news ticker, especially since these applications were tradition in earlier versions. Firefox, upon which Netscape Browser is based, does not include an email client or HTML editor either, but an HTML editor extension can be downloaded from the Extension and Themes section of the Firefox website , and email support is provided by Mozilla Thunderbird. Older Netscape releases were based upon the Mozilla Suite, which did include this functionality.

Another criticism is that the browser collects user browsing behavior by default . By default, the option "Allow Netscape to gather anonymous browser usage statistics" is enabled. The option is found in the "Advanced Settings" during installation. As many casual users may skip the dialogs during installation, this feature could be turned on in many installations of Netscape Browser. Some argue this feature should be called spyware, however this term usually applies only to software that attempts to send private information to companies often later selling this to advertisers, whereas the information collected is actually anonymous.

A related possible criticism is that in the browser's password manager menu, saved passwords can be viewed in plain text. Thus, if a user has access to another's account, they could retrieve all their usernames and passwords in plain text with little effort. Further, this option cannot be turned off or removed without editing the software. This problem doesn't happen in version 8.1.3.

A few days after Netscape 8.0.1 was released, Microsoft reported the browser disables the XML rendering engine in Internet Explorer by causing IE to render XML pages as a blank page. Netscape fixed the issue in version 8.0.2.

This article is issued from Wikipedia - version of the 9/14/2015. The text is available under the Creative Commons Attribution/Share Alike but additional terms may apply for the media files.