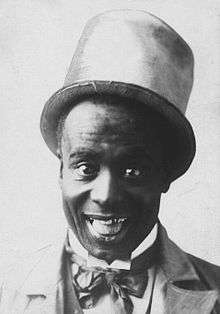 Ernest Hogan (born Ernest Reuben Crowdus; 1865 – May 20, 1909[1]) was the first African-American entertainer to produce and star in a Broadway show (The Oyster Man in 1907) and helped to popularize the musical genre of ragtime.[2]

A native of Bowling Green, Kentucky, as a teenager Hogan worked in traveling minstrel shows as a dancer, musician, and comedian. In 1895 Hogan composed several popular songs in a new musical genre, which he named ragtime.[3] These hit songs included "La Pas Ma La" and "All Coons Look Alike to Me". The success of this last song created many derogatory imitations, known as "coon songs" because of their use of racist and stereotypical images of blacks.

While Hogan was considered one of the most talented performers and comedians of his day,[4] his contribution to the racist "coon song" craze haunted him. Before his death, he stated that he "regretted" using the racial slur in his song.

He was born Ernest Reuben Crowders, in the Shake Rag District of Bowling Green, Kentucky, in 1865.[5] As a teenager, he traveled with a minstrel troupe called the Georgia Graduate, where he performed as a dancer, musician, and comedian. During this time he changed his name to Hogan because "Irish performers were in vogue."[4] Hogan likely performed in blackface during this time, as he sometimes did later in his career.[4] 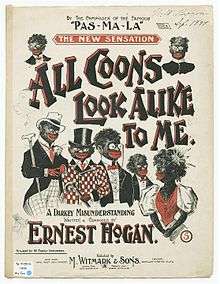 Sheet music to "All Coons Look Alike to Me." 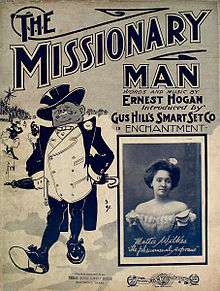 It was also during this time that Hogan created a comedy dance called the "pasmala", which consisted of a walk forward with three steps back. In 1895, he wrote and composed a song based on this dance called "La Pas Ma La".[4] The song's chorus was:

Hand upon yo' head, let your mind roll back,
Back, back back and look at the stars
Stand up rightly, dance it brightly
That's the Pas Ma La.

Hogan followed this song with the hit "All Coons Look Alike to Me". Hogan was evidently not the originator of the song's lyrics, having appropriated them after hearing a pianist in a Chicago salon playing a song titled "All Pimps Look Alike to Me".[6] Hogan merely changed the words slightly, substituting the word "coon" for "pimp"[7] and added a cakewalk syncopation to the music, which he had heard being played in back rooms and cafes.[8] The song eventually sold over a million copies.[6]

Hogan's use of the racial slur "coon" in the song infuriated many African Americans. Some Black performers made a point of removing the word "coon" from the song whenever they sang it.[7] In addition, the success of this song created many imitations, which became known as "coon songs" because of their use of extremely racist and stereotypical images of blacks. In Hogan's later years he evidently felt shame and a sense of "race betrayal" for the song.[6]

The controversy over the song has, to some degree, caused Hogan to be overlooked as one of the originators of ragtime, which has been called the first truly American musical genre. Hogan's songs were among the first published ragtime songs and the first to use the term "rag" in their sheet music copy. While Hogan made no claims to having exclusively created ragtime, fellow Black musician Tom Fletcher said Hogan was the "first to put on paper the kind of rhythm that was being played by non-reading musicians."[6] When the ragtime championship was held as part of the 1900 World Competition in New York, semifinalists played Hogan's "All Coons Look Alike to Me" to prove their skill.[9]

As Hogan said shortly before he died,

(That) song caused a lot of trouble in and out of show business, but it was also good for show business because at the time money was short in all walks of life. With the publication of that song, a new musical rhythm was given to the people. Its popularity grew and it sold like wildfire... That one song opened the way for a lot of colored and white songwriters. Finding the rhythm so great, they stuck to it ... and now you get hit songs without the word 'coon.' Ragtime was the rhythm played in backrooms and cafes and such places. The ragtime players were the boys who played just by ear their own creations of music which would have been lost to the world if I had not put it on paper."[8]