Keret was born in Ramat Gan, Israel in 1967.[1] He is a third child to parents who survived the Holocaust.[2] Both of his parents are from Poland.[3] He lives in Tel Aviv with his wife, Shira Geffen, and their son, Lev. He is a lecturer at Ben-Gurion University of the Negev in Beer Sheva, and at Tel Aviv University. He holds dual Israeli and Polish citizenship.

Keret's first published work was Pipelines (צינורות‎, Tzinorot, 1992), a collection of short stories which was largely ignored when it came out. His second book, Missing Kissinger (געגועיי לקיסינג'ר‎, Ga'agu'ai le-Kissinger, 1994), a collection of fifty very short stories, caught the attention of the general public. The short story "Siren", which deals with the paradoxes of modern Israeli society, is included in the curriculum for the Israeli matriculation exam in literature.

Keret has co-authored several comic books, among them Nobody Said It Was Going to Be Fun (לא באנו ליהנות‎, Lo banu leihanot, 1996) with Rutu Modan and Streets of Fury (סמטאות הזעם, Simtaot Haza'am, 1997) with Asaf Hanuka. In 1999, five of his stories were translated into English, and adapted into "graphic novellas" under the joint title Jetlag. The illustrators were the five members of the Actus Tragicus collective.

In 1998, Keret published Kneller's Happy Campers (הקייטנה של קנלר‎, Hakaytana Shel Kneller), a collection of short stories. The title story, the longest in the collection, follows a young man who commits suicide and goes on a quest for love in the afterlife. It appears in the English language collection of Keret's stories The Bus Driver Who Wanted To Be God & Other Stories (2004) and was adapted into the graphic novel Pizzeria Kamikaze (2006), with illustrations by Asaf Hanuka. Keret's latest short story collections are Anihu (אניהו‎, literally I-am-him, 2002; translated into English as Cheap Moon, after one of the other stories in the collection) and Pitom Defikah Ba-delet (פתאום דפיקה בדלת‎, translated into English as Suddenly a Knock at the Door).

Keret also wrote a children's book Dad Runs Away with the Circus (2004), illustrated by Rutu Modan.

Keret publishes some of his works on the Hebrew-language web site "Bimah Hadashah" (New Stage).

Keret has worked in Israeli television and film, including three seasons as a writer for the popular sketch show The Cameri Quintet. He also wrote the story for the 2001 TV movie Aball'e starring Shmil Ben Ari.

In 2006, Wristcutters: A Love Story, a dark comedy/love story based on Keret's novella Kneller's Happy Campers, premiered at the Sundance Film Festival. The story was adapted by director Goran Dukić into a film starring Patrick Fugit, Shannyn Sossamon, Tom Waits and Will Arnett.

Etgar and his wife Shira directed the 2007 film Jellyfish, based on a story written by Shira.

$9.99, a stop motion animated feature film, was released in 2009. Written by Keret and directed by Tatia Rosenthal, it is an Israeli/Australian co-production featuring the voices of Geoffrey Rush, Anthony LaPaglia and other leading Australian actors.[4]

In 2010 a short feature film based on Keret's story was released. An Exclusive novella was adapted and directed by the young Polish director Krzysztof Szot. The film, also known as Wyłączność (An Exclusive), was presented at the Cannes Film Festival 2010 in the Short Film Corner section.

Keret's work is frequently featured on the National Public Radio program This American Life, which has presented readings of eight of his stories.[5]

In October 2011 the public radio show Selected Shorts devoted an entire show to live readings of Keret's stories, including “Suddenly a Knock at the Door,” “Halibut," “Lieland”, and “Fatso.”[6] Keret himself introduced several of the stories.[7]

In May 2013, the short film LieLand,[9] adapted and directed by Silvia Grossmann, a Brazilian/American filmmaker, premiered at the Cannes Film Festival. 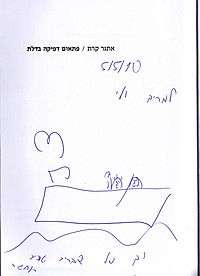 Keret's writing style is lean, using everyday language, slang, and dialect. Often his stories are surreal, but believably so, leaving you in a curious world much like yours, where the boundaries of possibility are easily changing. His work has influenced many writers of his generation, as well as bringing a renewed surge in popularity for the short story form in Israel in the second half of the 1990s.

Keret has received the Prime Minister's award for literature, as well as the Ministry of Culture's Cinema Prize. In 2006 he was chosen as an outstanding artist of the prestigious Israel Cultural Excellence Foundation.

In 1993 he won the first prize in the Alternative Theater Festival in Akko for Entebbe: A Musical, which he wrote with Jonathan Bar Giora.

Keret was on the jury for the 2010 Neustadt International Prize for Literature.[10]

A review of Missing Kissinger by Todd McEwen describes Etgar Keret's locale as that of "male confusion, loneliness, blundering, bellowing and, above all, stasis. His narrator is trapped in an angry masculine wistfulness which is awful to behold in its masturbatory disconnection from the world's real possibilities and pleasures." Etgar is "not much of a stylist - you get the impression that he throws three or four of these stories off on the bus to work every morning," and his "wild, blackly inventive pieces...might have been dreamed up by a mad scientist rather than a writer."[12]

15 short stories by Keret and a novella by El-Youssef.