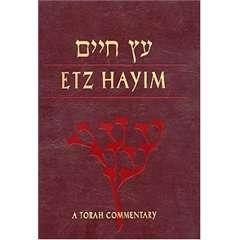 The Etz Hayim (etz hayyim עץ חיים, "tree of life" in English) humash, also known as Etz Hayim: Torah and Commentary, is a humash (a Torah in printed form) published and used by the Conservative Jewish movement. Its production involved the collaboration of the Rabbinical Assembly, the United Synagogue of Conservative Judaism, and the Jewish Publication Society.

The Etz Hayim contains the Hebrew text of the Torah, the Jewish Publication Society (JPS)'s modern English translation of the Hebrew text, a number of commentaries, written in English, on the Torah which run alongside the Hebrew text and its English translation and a number of essays on the Torah and Tanakh in the back of the book. The Etz Hayim contains three types of commentary: the p'shat which discusses the literal meaning of the text, the drash which draws on Talmudic, Medieval, Chassidic, and Modern Jewish sources to expound on the deeper meaning of the text, and the halacha l'maaseh which explains how the text relates to current Jewish practice and halacha, or Jewish law. The essays in the back cover a wide range of topics, from kashrut to eschatology and everything in between.

Some of the essays uphold the traditional view that the Torah is the divine word of God, while others challenge it and question the historicity of some of the biblical narratives. This has raised objections, among Orthodox circles, to the publication. [1]