This article is about the religious and metaphysical concept. For the Marvel Comics character, see Ex Nihilo (comics). 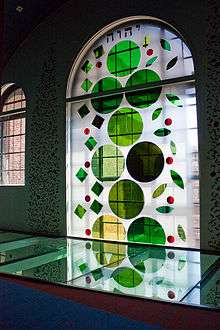 Tree of Life by Eli Content. The Tree of Life, or Etz haChayim (עץ החיים) in Hebrew, is a mystical symbol used in the Kabbalah of esoteric Judaism to describe the path to HaShem and the manner in which He created the world ex nihilo (out of nothing), Joods Historisch Museum.

Ex nihilo is a Latin phrase meaning "out of nothing". It often appears in conjunction with the concept of creation, as in creatio ex nihilo, meaning "creation out of nothing", chiefly in philosophical or theological contexts, but it also occurs in other fields.

The phrase ex nihilo also appears in the classical philosophical formulation ex nihilo nihil fit, which means "Out of nothing comes nothing".

When used outside of religious or metaphysical contexts ex nihilo also refers to something coming from nothing. For example, in a conversation, one might raise a topic "ex nihilo" if it bears no relation to the previous topic of discussion.

Ancient Near Eastern mythologies and classical creation myths in Greek mythology envisioned the creation of the world as resulting from the actions of a god or gods upon already-existing primeval matter, known as chaos.

An early conflation of Greek philosophy with the narratives in the Hebrew Bible came from Philo of Alexandria (d. AD 50), writing in the context of Hellenistic Judaism. Philo equated the Hebrew creator-deity Yahweh with Aristotle's primum movens (First Cause)[1][2] in an attempt to prove that the Jews had held monotheistic views even before the Greeks. However, this was still within the context of creation from pre-existing materials (i.e., "moving" or "changing" a material substratum.)

The classical tradition of creation from chaos first came under question in Hellenistic philosophy (on a priori grounds), which developed the idea that the primum movens must have created the world out of nothing.

Theologians debate whether the Bible itself teaches creation ex nihilo. Traditional interpreters[3] argue on grammatical and syntactical grounds that this is the meaning of Genesis 1:1, which is commonly rendered: "In the beginning God created the heavens and the earth." They find further support for this view in New Testament passages such as Hebrews 11:3—"By faith we understand that the universe was created by the word of God, so that what is seen was not made out of things that are visible" and Revelation 4:11, "For you [God] created all things, and by your will they existed and were created." However, other interpreters[4] understand creation ex nihilo as a second-century theological development. According to this view, church fathers opposed notions appearing in pre-Christian creation myths and in Gnosticism—notions of creation by a demiurge out of a primordial state of matter (known in religious studies as chaos after the Greek term used by Hesiod in his Theogony).[5] Jewish thinkers took up the idea,[6] which became important to Judaism, to ongoing strands in the Christian tradition, and—as a corollary—to Islam.

The first sentence of the Greek version of Genesis in the Septuagint starts with the words: ἐν ἀρχῇ ἐποίησεν, translatable as "in the beginning he made".[7]

A verse of 2 Maccabees (a book written in Koine Greek in the same sphere of Hellenized Judaism of Alexandria, but predating Philo by about a century) expresses the following: "I beseech thee, my son, look upon the heaven and the earth, and all that is therein, and consider that God made them of things that were not; and so was mankind made likewise." (2 Maccabees 7:28, KJV). While those who believe in ex nihilo point to God creating "things that were not", those who reject creation out of nothing point out that the context mentions the creation of man, who was "made from the dust" and not from absolutely "nothing". Many ancient texts tend to have similar issues, and those on each side tend to interpret the text according to their understanding.

Max Weber summarizes a sociological view of the overall development and corollaries of the theological idea:

[...] As otherworldly expectations become increasingly important, the problem of the basic relationship of god to the world and the problem of the world's imperfections press into the foreground of thought; this happens the more life here on earth comes to be regarded as a merely provisional form of existence when compared to that beyond, the more the world comes to be viewed as something created by god ex nihilo, and therefore subject to decline, the more god himself is conceived as a subject to transcendental goals and values, and the more a person's behavior in this world becomes oriented to his fate in the next. [...][8]

A major argument for creatio ex nihilo, the first cause argument, states in summary:

An expansion of the first cause argument is the Kalam cosmological argument, which also requires creatio ex nihilo.

Some scholars have argued that Plethon viewed Plato as positing ex nihilo creation in his Timaeus.

The School of Chartres understood the creation account in Plato's Timaeus to refer to creatio ex nihilo.[11]

Early Islamic philosophy, as well as key Muslim schools of thought, have argued a wide array of views, the basis always being that the creator was an eternal being who was outside of the creation (i.e., any materially based entities within all of creation), and was not a part of creation. Several schools of thought stemming from the first cause argument, and a great deal of philosophical works from Muslim scholars such as Al-Ghazali, came from the following verses in the Qur'an. The following quotations come from Muhammad Asad's translation, The Message of The Qur'an:

Some of the early Christian Church Fathers with a Platonic background argued that the act of creation itself involved pre-existent matter, but made that matter in turn to have been created out of nothing.[16]

The RigVeda quotes "If in the beginning there was neither Being nor Non-Being, neither air nor sky, what was there? Who or what oversaw it? What was it when there was no darkness, light, life, or death? We can only say that there was the One, that which breathed of itself deep in the void, that which was heat and became desire and the germ of spirit," which is suggestive of the fact that Ex nihilo creator was always there and he is not controlled by time or by any previous creation.[17]

A widely supported scientific theory in modern physics is the zero-energy universe which states that the total amount of energy in the universe is exactly zero. It has been argued that this is the only kind of universe that could come from nothing.[18] Such a universe would have to be flat in shape, a state which does not contradict current observations that the universe is flat with a 0.5% margin of error.[19][20]

The paper "Spontaneous creation of the Universe Ex Nihilo" provides a model for a way the Universe could have been created from pure 'nothing' in information terms.[21]

See also: Parmenides and Nothing comes from nothing

The first cause argument was rooted in ancient Greek philosophy and based on observation in physics. Originally, it was understood in the context of creation from chaos. The observed phenomenon seen in reality is that nothing moves by itself. In other words, motion is not self-caused; thus, the Classic Greek thinkers argued that the cosmos must have had a "prime mover" primum movens. However, this scientific observation of motion does not logically extend to the idea of existence, and therefore does not necessarily indicate creation from absolutely nothing.

David Ray Griffin expressed his thoughts on this as follows: "No special philosophical problems are raised by this view: If it is intelligible to hold that the existence of God requires no explanation, since something must exist necessarily and "of itself," then it is not unintelligible to hold that that which exists necessarily is God and a realm of non-divine actualities."[22]

Bruce K. Waltke wrote an extensive Biblical study of creation theology in which he argues creation from chaos rather than nothing based on the Hebrew Torah and the New Testament texts. This work was published by the Western Conservative Baptist Seminary in 1974 and again in 1981.[23] On a historical basis, many scholars agree that the doctrine of creatio ex nihilo was not the original intent of the Biblical authors, but instead a change in the interpretation of the texts that began to evolve in the mid-second century AD in the atmosphere of Hellenistic philosophy.[24][25] The idea solidified around 200 AD in arguments and in response to the Gnostics, Stoics, and Middle Platonists.[26]

Thomas Jay Oord, a Christian philosopher and theologian, argues that Christians should abandon the doctrine of creation ex nihilo. Oord points to the work of biblical scholars such as Jon D. Levenson, who points out that the doctrine of creatio ex nihilo does not appear in Genesis. Oord speculates that God created our particular universe billions of years ago from primordial chaos. This chaos, however, did not predate God, for God would have created the chaotic elements as well.[27] Oord suggests that God can create all things without creating from absolute nothingness.[28]

Process theologians argue that humans have always related a God to some "world" or another. They[30] also claim that rejecting creatio ex nihilo provides the opportunity to affirm that God has everlastingly created and related with some realm of non-divine actualities or another (compare continuous creation). According to this alternative God-world theory, no non-divine thing exists without the creative activity of God, and nothing can terminate God's necessary existence.

Some non-trinitarian Christian churches do not teach the ex nihilo doctrine: The Church of Jesus Christ of Latter-day Saints (LDS) teaches that Jehovah (whom they identify as the heavenly form of Jesus Christ), under the direction of God the Father, organized this world and others like it out of eternal, pre-existing materials.[31][32] The first modern (non-biblical) prophet of the religion, Joseph Smith, explained the LDS view as follows: "Now, the word create does not mean to create out of nothing; it means to organize... God had materials to organize the world out of chaos... The pure principles of element are principles which can never be destroyed; they may be organized and reorganized, but not destroyed. They had no beginning and can have no end"[33] An ongoing debate exists on the issue of creation Ex Nihilo versus creation Ex Materia between evangelical authors Paul Copan and William Lane Craig[34] and LDS/Mormon apologist Blake Ostler.[35]

Jehovah's Witnesses teach that God used the energy he possesses to create the Universe based on their interpretation of Isaiah 40:26.[36] They believe this harmonizes with the scientific idea of the relationship between matter and energy. They distinguish Jehovah from Jesus Christ, teaching that before he created the physical universe, Jehovah created Jesus and that Michael is the heavenly form of Jesus.

The Vedanta schools of Hinduism reject the concept of creation ex nihilo for several reasons, for example:

The Bhagavad Gita (BG) states the eternality of matter and its transformability clearly and succinctly: "Material nature and the living entities should be understood to be beginningless. Their transformations and the modes of matter are products of material nature."[39] The opening words of Krishna in BG 2.12-13 also imply this, as do the doctrines referred to in BG 16.8 as explained by the commentator Vadiraja Tirtha.[40]

Most philosophical schools in Hinduism maintain that material creation started with some minute particle (or seed) which had to be co-eternal or a part of ultimate reality (Brahman). This minute starting point is also the point into which all creation contracts at the end of each cycle. This concept varies between various tradition such as the Vishishtadvaita tradition that asserts that the Universe a part of God and created from some aspect of His divinity and Tamil Shaiva Siddhanta traditions which state that the minute initial particle (shuddha Maya) has always existed and was never created.