An exchange, or bourse /bʊərs/, is a highly organized market where (especially) tradable securities, commodities, foreign exchange, futures, and options contracts are sold and bought. 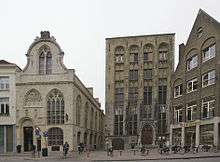 The term bourse is derived from the 13th-century inn named Huis ter Beurze in Bruges, Belgium, where traders and foreign merchants from across Europe conducted business in the late medieval period.[1] The building, which was established by Robert van der Buerze as a hostelry, had operated from 1285. Its managers became famous for offering judicious financial advice to the traders and merchants who frequented the building. This service became known as the "Beurze Purse" which is the basis of bourse, meaning an organised place of exchange. Eventually the building became solely a place for trading in commodities.

During the 18th century, the façade of the Huis ter Beurze was rebuilt with a wide frontage of pilasters. However, in 1947 it was restored to its original medieval appearance.

In the twelfth century, foreign exchange dealers in France were responsible for controlling and regulating the debts of agricultural communities on behalf of banks. These were actually the first brokers. They met on the Grand Bridge in Paris, the current Pont au Change. It takes its name from the forex brokers.

In the thirteenth century, the Lombard bankers were the first to share state claims in Pisa, Genoa and Florence. In 1409, the phenomenon was institutionalized by the creation of the Exchange Bruges. It was quickly followed by others, in Flanders and neighboring countries (Ghent and Amsterdam). It is still in Belgium and the first building designed to house a scholarship was built in Antwerp. The first scholarship organized in France was born in Lyon in 1540.

The first documented crash took place in 1636 in Holland. The prices of tulip bulbs reaching excessively high levels, known as the Tulip mania. The price collapsed on October 1.

In the seventeenth century, the Dutch were the first to use the stock market to finance companies. The first company to issue stocks and bonds was the Dutch East India Company, introduced in 1602.

The London Stock Exchange started operating and listing shares and bonds in 1688.[2]

In 1774, the Paris Stock Exchange (founded in 1724), say the courts, must now necessarily be shouted to improve the transparency of operations. In the nineteenth century, the industrial revolution enables rapid development of stock markets, driven by the significant capital requirements for finance industry and transport. Since the computer revolution of the 1970s, we are witnessing the dematerialization of securities traded on the stock exchange.

In 1971, the NASDAQ became the primary market quotes computer. In France, the dematerialization was effective from November 5, 1984.

Exchanges bring together brokers and dealers who buy and sell these objects. These various financial instruments can typically be sold either through the exchange, typically with the benefit of a clearinghouse to cover defaults, or over-the-counter (OTC), where there is typically less protection against counter-party risk from clearinghouses,[3] although OTC clearinghouses have become more common over the years, with regulators placing pressure on the OTC markets to clear and display trades openly.[4][5]

Exchanges can be subdivided: