A swap is a derivative in which two counterparties exchange cash flows of one party's financial instrument for those of the other party's financial instrument. The benefits in question depend on the type of financial instruments involved. For example, in the case of a swap involving two bonds, the benefits in question can be the periodic interest (coupon) payments associated with such bonds. Specifically, two counterparties agree to exchange one stream of cash flows against another stream. These streams are called the legs of the swap. The swap agreement defines the dates when the cash flows are to be paid and the way they are accrued and calculated.[1] Usually at the time when the contract is initiated, at least one of these series of cash flows is determined by an uncertain variable such as a floating interest rate, foreign exchange rate, equity price, or commodity price.[1]

The cash flows are calculated over a notional principal amount. Contrary to a future, a forward or an option, the notional amount is usually not exchanged between counterparties. Consequently, swaps can be in cash or collateral.

Swaps can be used to hedge certain risks such as interest rate risk, or to speculate on changes in the expected direction of underlying prices.[2]

Swaps were first introduced to the public in 1981 when IBM and the World Bank entered into a swap agreement.[3] Today, swaps are among the most heavily traded financial contracts in the world: the total amount of interest rates and currency swaps outstanding is more than $348 trillion in 2010, according to Bank for International Settlements (BIS).

Most swaps are traded over-the-counter (OTC), "tailor-made" for the counterparties. Some types of swaps are also exchanged on futures markets such as the Chicago Mercantile Exchange, the largest U.S. futures market, the Chicago Board Options Exchange, IntercontinentalExchange and Frankfurt-based Eurex AG.

The Bank for International Settlements (BIS) publishes statistics on the notional amounts outstanding in the OTC derivatives market. At the end of 2006, this was USD 415.2 trillion, more than 8.5 times the 2006 gross world product. However, since the cash flow generated by a swap is equal to an interest rate times that notional amount, the cash flow generated from swaps is a substantial fraction of but much less than the gross world product—which is also a cash-flow measure. The majority of this (USD 292.0 trillion) was due to interest rate swaps. These split by currency as: 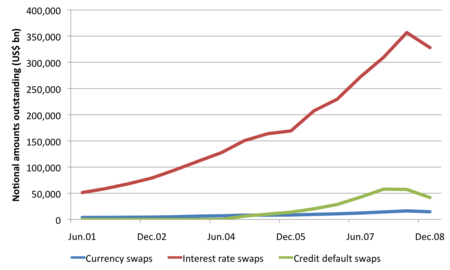 Usually, at least one of the legs has a rate that is variable. It can depend on a reference rate, the total return of a swap, an economic statistic, etc. The most important criterion is that it comes from an independent third party, to avoid any conflict of interest. For instance, LIBOR is published by Intercontinental Exchange.

Size of the Swap Market

As the International Finance in Practice box suggests, the market for currency swaps developed first. Today, however, the interest rate swap market is larger. Size is measured by notional principal, a reference amount of principal for determining interest payments. The exhibit indicates that both markets have grown significantly since 2000, but that the growth in interest rate swap has been by far more dramatic. The total amount of interest rate swaps outstanding increased from $48,768 billion at year-end 2000 to $349.2 trillion by year-end 2009, an increase of 616 percent. Total outstanding currency swaps increased 417 percent, from $3,194 billion at year-end 2000 to over $16.5 trillion by year-end 2009.

A swap bank is a generic term to describe a financial institution that facilitates swaps between counterparties. A swap bank can be an international commercial bank, an investment bank, a merchant bank, or an independent operator. The swap bank serves as either a swap broker or swap dealer. As a broker, the swap bank matches counterparties but does not assume any risk of the swap. The swap broker receives a commission for this service. Today, most swap banks serve as dealers or market makers. As a market marker, the swap bank stands willing to accept either side of a currency swap, and then later lay it off, or match it with a counterparty. In this capacity, the swap bank assumes a position in the swap and therefore assumes certain risks. The dealer capacity is obviously more risky, and the swap bank would receive a portion of the cash flows passed through it to compensate it for bearing this risk.

Is the Swap Market efficient?

The two primary reasons for a counterparty to use a currency swap are to obtain debt financing in the swapped currency at an interest cost reduction brought about through comparative advantages each counterparty has in its national capital market, and/or the benefit of hedging long-run exchange rate exposure. These reasons seem straightforward and difficult to argue with, especially to the extent that name recognition is truly imortant in raising funds in the international bond market. The two primary reasons for swapping interest rates are to better much maturities of assets and liabilities and /or to obtain a cost savings via the quality spread differential. In an efficient market without barriers to capital flows, the cost-savings argument through a QSD is difficult to accept. It implies that an arbitrage opportunity exists because of some mispricing of the default risk premiums on different types of debt instruments. If the QSD is one of the primary reasons for the existence of interest rate swaps, one would expect arbitrage to eliminate it over time and that the growth of the swap market would decrease. Thus, the arbitrage argument does not seem to have much merit. Consequently, one must rely on an argument of market completeness for the existence and growth of interest rate swaps. That is, all typesof debt instruments are not regularly available for all borrowers. Thus, the interest rate swap market assists in tailoring financing to the type desired by a particular borrower. Both counterparties can benefit (as well as the swap dealer) through financing that is more suitable for their asset maturity structures.

The five generic types of swaps, in order of their quantitative importance, are: interest rate swaps, currency swaps, credit swaps, commodity swaps and equity swaps. There are also many other types of swaps.

A is currently paying floating, but wants to pay fixed. B is currently paying fixed but wants to pay floating. By entering into an interest rate swap, the net result is that each party can 'swap' their existing obligation for their desired obligation. Normally, the parties do not swap payments directly, but rather each sets up a separate swap with a financial intermediary such as a bank. In return for matching the two parties together, the bank takes a spread from the swap payments.

For example, party B makes periodic interest payments to party A based on a variable interest rate of LIBOR +70 basis points. Party A in return makes periodic interest payments based on a fixed rate of 8.65%. The payments are calculated over the notional amount. The first rate is called variable because it is reset at the beginning of each interest calculation period to the then current reference rate, such as LIBOR. In reality, the actual rate received by A and B is slightly lower due to a bank taking a spread.

A commodity swap is an agreement whereby a floating (or market or spot) price is exchanged for a fixed price over a specified period. The vast majority of commodity swaps involve crude oil.

A subordinated risk swap (SRS), or equity risk swap, is a contract in which the buyer (or equity holder) pays a premium to the seller (or silent holder) for the option to transfer certain risks. These can include any form of equity, management or legal risk of the underlying (for example a company). Through execution the equity holder can (for example) transfer shares, management responsibilities or else. Thus, general and special entrepreneurial risks can be managed, assigned or prematurely hedged. Those instruments are traded over-the-counter (OTC) and there are only a few specialized investors worldwide.

There are myriad different variations on the vanilla swap structure, which are limited only by the imagination of financial engineers and the desire of corporate treasurers and fund managers for exotic structures.[1]

The value of a swap is the net present value (NPV) of all estimated future cash flows. A swap is worth zero when it is first initiated, however after this time its value may become positive or negative.[1] There are two ways to value swaps: in terms of bond prices, or as a portfolio of forward contracts.[1]

While principal payments are not exchanged in an interest rate swap, assuming that these are received and paid at the end of the swap does not change its value. Thus, from the point of view of the floating-rate payer, a swap is equivalent to a long position in a fixed-rate bond (i.e. receiving fixed interest payments), and a short position in a floating rate note (i.e. making floating interest payments):

From the point of view of the fixed-rate payer, the swap can be viewed as having the opposite positions. That is,

Similarly, currency swaps can be regarded as having positions in bonds whose cash flows correspond to those in the swap. Thus, the home currency value is:

is the domestic cash flows of the swap,

LIBOR rates are determined by trading between banks and change continuously as economic conditions change. Just like the prime rate of interest quoted in the domestic market, LIBOR is a reference rate of interest in the international market.

As mentioned, to be arbitrage free, the terms of a swap contract are such that, initially, the NPV of these future cash flows is equal to zero. Where this is not the case, arbitrage would be possible.

For example, consider a plain vanilla fixed-to-floating interest rate swap where Party A pays a fixed rate, and Party B pays a floating rate. In such an agreement the fixed rate would be such that the present value of future fixed rate payments by Party A are equal to the present value of the expected future floating rate payments (i.e. the NPV is zero). Where this is not the case, an Arbitrageur, C, could: