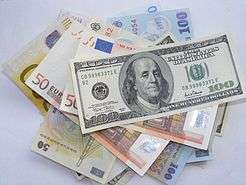 In the retail currency exchange market, different buying and selling rates will be quoted by money dealers. Most trades are to or from the local currency. The buying rate is the rate at which money dealers will buy foreign currency, and the selling rate is the rate at which they will sell that currency. The quoted rates will incorporate an allowance for a dealer's margin (or profit) in trading, or else the margin may be recovered in the form of a commission or in some other way. Different rates may also be quoted for cash (usually notes only), a documentary form (such as traveler's cheques) or electronically (such as a credit card purchase). The higher rate on documentary transactions has been justified as compensating for the additional time and cost of clearing the document. On the other hand, cash is available for resale immediately, but brings security, storage, and transportation costs, and the cost of tying up capital in a stock of banknotes (bills).

Currency for international travel and cross-border payments is predominantly purchased from banks, foreign exchange brokerages and various forms of bureau de change. These retail outlets source currency from the inter-bank markets, which are valued by the Bank for International Settlements at 5.3 trillion US dollars per day.[3] The purchase is made at the spot contract rate. Retail customers will be charged, in the form of commission or otherwise, to cover the provider's costs and generate a profit. One form of charge is the use of an exchange rate that is less favourable than the wholesale spot rate.[4] The difference between retail buying and selling prices is referred to as the bid-ask spread. 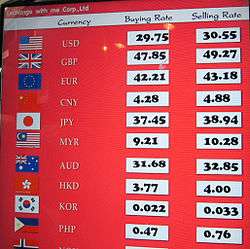 In the foreign exchange market, a currency pair is the quotation of the relative value of a currency unit against the unit of another currency. The quotation EUR/USD 1.3225 means that 1 Euro will buy 1.3225 US dollars. In other words, this is the price of a unit of Euro in US dollars. Here, EUR is called the "Fixed currency", while USD is called the "Variable currency".

There is a market convention that determines which is the fixed currency and which is the variable currency. In most parts of the world, the order is: EUR – GBP – AUD – NZD – USD – others. Accordingly, in a conversion from EUR to AUD, EUR is the fixed currency, AUD is the variable currency and the exchange rate indicates how many Australian dollars would be paid or received for 1 Euro. Cyprus and Malta, which were quoted as the base to the USD and others, were recently removed from this list when they joined the Eurozone.

In some areas of Europe and in the retail market in the United Kingdom, EUR and GBP are reversed so that GBP is quoted as the fixed currency to the euro. In order to determine which is the fixed currency when neither currency is on the above list (i.e. both are "other"), market convention is to use the fixed currency which gives an exchange rate greater than 1.000. This reduces rounding issues and the need to use excessive numbers of decimal places. There are some exceptions to this rule: for example, the Japanese often quote their currency as the base to other currencies.

Quotation using a country's home currency as the price currency (for example, EUR 0.8989 = USD 1.00 in the Eurozone) is known as direct quotation or price quotation (from that country's perspective)[5] and is used in most countries.

Quotation using a country's home currency as the unit currency (for example, USD 1.11 = EUR 1.00 in the Eurozone) is known as indirect quotation or quantity quotation and is used in British newspapers ; it is also common in Australia, New Zealand and the Eurozone.

In 2005, Barclays Capital broke with convention by quoting spot exchange rates with five or six decimal places on their electronic dealing platform.[7] The contraction of spreads (the difference between the bid and ask rates) arguably necessitated finer pricing and gave the banks the ability to try and win transactions on multibank trading platforms where all banks may otherwise have been quoting the same price. A number of other banks have now followed this system.

Each country, through varying mechanisms, manages the value of its currency. As part of this function, it determines the exchange rate regime that will apply to its currency. For example, the currency may be free-floating, pegged or fixed, or a hybrid.

If a currency is free-floating, its exchange rate is allowed to vary against that of other currencies and is determined by the market forces of supply and demand. Exchange rates for such currencies are likely to change almost constantly as quoted on financial markets, mainly by banks, around the world.

A movable or adjustable peg system is a system of fixed exchange rates, but with a provision for the revaluation (usually devaluation) of a currency. For example, between 1994 and 2005, the Chinese yuan renminbi (RMB) was pegged to the United States dollar at RMB 8.2768 to $1. China was not the only country to do this; from the end of World War II until 1967, Western European countries all maintained fixed exchange rates with the US dollar based on the Bretton Woods system. But that system had to be abandoned in favor of floating, market-based regimes due to market pressures and speculations according to President Richard M. Nixon in a speech that he delivered on August 15, 1971 in what is known as Nixon Shock.

Still, some governments strive to keep their currency within a narrow range. As a result, currencies become over-valued or under-valued, leading to excessive trade deficits or surpluses.

A market-based exchange rate will change whenever the values of either of the two component currencies change. A currency will tend to become more valuable whenever demand for it is greater than the available supply. It will become less valuable whenever demand is less than available supply (this does not mean people no longer want money, it just means they prefer holding their wealth in some other form, possibly another currency).

Speculative demand is much harder for central banks to accommodate, which they influence by adjusting interest rates. A speculator may buy a currency if the return (that is the interest rate) is high enough. In general, the higher a country's interest rates, the greater will be the demand for that currency. It has been argued that such speculation can undermine real economic growth, in particular since large currency speculators may deliberately create downward pressure on a currency by shorting in order to force that central bank to buy their own currency to keep it stable. (When that happens, the speculator can buy the currency back after it depreciates, close out their position, and thereby take a profit.)

For carrier companies shipping goods from one nation to another, exchange rates can often impact them severely. Therefore, most carriers have a CAF charge to account for these fluctuations.[8][9] 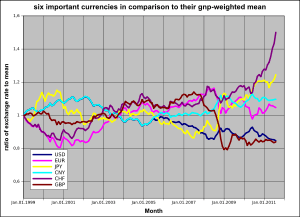 Uncovered interest rate parity (UIRP) states that an appreciation or depreciation of one currency against another currency might be neutralized by a change in the interest rate differential. If US interest rates increase while Japanese interest rates remain unchanged then the US dollar should depreciate against the Japanese yen by an amount that prevents arbitrage (in reality the opposite, appreciation, quite frequently happens in the short-term, as explained below). The future exchange rate is reflected into the forward exchange rate stated today. In our example, the forward exchange rate of the dollar is said to be at a discount because it buys fewer Japanese yen in the forward rate than it does in the spot rate. The yen is said to be at a premium.

UIRP showed no proof of working after the 1990s. Contrary to the theory, currencies with high interest rates characteristically appreciated rather than depreciated on the reward of the containment of inflation and a higher-yielding currency.

The balance of payments model holds that foreign exchange rates are at an equilibrium level if they produce a stable current account balance. A nation with a trade deficit will experience a reduction in its foreign exchange reserves, which ultimately lowers (depreciates) the value of its currency. A cheaper (undervalued) currency renders the nation's goods (exports) more affordable in the global market while making imports more expensive. After an intermediate period, imports will be forced down and exports to rise, thus stabilizing the trade balance and bring the currency towards equilibrium.

Like purchasing power parity, the balance of payments model focuses largely on trade-able goods and services, ignoring the increasing role of global capital flows. In other words, money is not only chasing goods and services, but to a larger extent, financial assets such as stocks and bonds. Their flows go into the capital account item of the balance of payments, thus balancing the deficit in the current account. The increase in capital flows has given rise to the asset market model effectively.

The increasing volume of trading of financial assets (stocks and bonds) has required a rethink of its impact on exchange rates. Economic variables such as economic growth, inflation and productivity are no longer the only drivers of currency movements. The proportion of foreign exchange transactions stemming from cross border-trading of financial assets has dwarfed the extent of currency transactions generated from trading in goods and services.[11]

A country may gain an advantage in international trade if it controls the market for its currency to keep its value low, typically by the national central bank engaging in open market operations. In the early twenty-first century it was widely asserted that the People's Republic of China had been doing this over a long period of time.[12]

Other nations, including Iceland, Japan, Brazil, and so on also devalue their currencies in the hope of reducing the cost of exports and thus bolstering their economies. A lower exchange rate lowers the price of a country's goods for consumers in other countries, but raises the price of imported goods and services for consumers in the low value currency country.[13]