This article is about the RAF unit. For the similarly named USAF concept, see Air Expeditionary Wing.

On 1 April 2006 Expeditionary Air Wings (EAWs) were formed at nine of the RAF's Main Operating Bases. Each EAW has its own identity and is led by the Station Commander, supported by his Station management team. The deployable elements of the station structures form the core of each EAW, reinforced by assigned Capability-based Module Readiness System (CMRS) personnel and elements of the Air Combat Support Units (ACSUs). EAWs enable the RAF to train as cohesive units of Air Power which are prepared and capable of transitioning quickly from peacetime structures and deploying swiftly on operations. 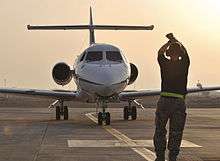