Expo '98 (1998 Lisbon World Exposition) was an official specialised World's Fair held in Lisbon, Portugal from Friday, 22 May to Wednesday, 30 September 1998.[1] The theme of the fair was "The Oceans, a Heritage for the Future", chosen in part to commemorate 500 years of Portuguese discoveries. The Expo received around 11 million visitors[2] in 132 days, while 155 countries and organizations were represented.

The idea to organize a World's Fair in Portugal originated in 1989 between two Portuguese, António Taurino Mega Ferreira and Vasco Graça Moura, who were in charge of organizing the commemoration of the 500th anniversary of Vasco da Gama's arrival in India in 1498.

Once Government support was obtained, Ferreira led the bid at the Bureau of International Expositions, which in 1992 declared Lisbon the winner, against the other contender Toronto, Canada. The state-owned company Parque Expo was formed to make the Fair a self-sustaining event, with revenue coming from admission tickets and, especially, sales of real estate and parcel lots at the Expo's emplacement.

The first Commissioner of Expo '98 (and Parque Expo's CEO) was António Cardoso e Cunha. He was replaced in 1997 by José de Melo Torres Campos, after a general election resulted in a change in government.

The area chosen for the Expo '98 was a 5 kilometres (3.1 mi)-wide strip that covered 50 hectares (0.19 sq mi) in Lisbon's east-end alongside the Tagus river. The area had been landscaped in 1942 as a Hydroport, for docking the hydroplanes that crossed the Atlantic to and from the USA. When the modern jet planes rendered the hydroplanes obsolete, the place became an industrial park of containers, polluting industries and slaughterhouses which had seen a growing degradation over the decades.

As a result, the Expo '98 was fully built from scratch. Every building was pre-sold for after-Expo repurposing thus ensuring that, after the Expo closed, the site would not be left semi-abandoned, as had happened with previous expos, particularly Seville Expo '92. As a reminder of the site's industrial past, only a refinery tower was kept and repurposed.

To support the expected influx of visitors, an extensive access program was devised, including: 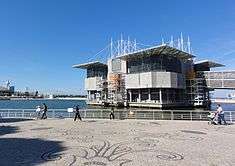 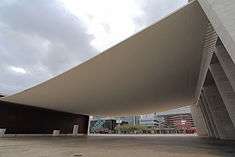 Pavilion of the Portugal with its concrete veil 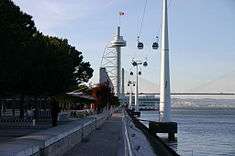 Out of the five major themed pavilions at Lisbon’s Expo 98, the Utopia Pavilion was among the most popular. Reflecting the Expo’s overall theme of “The Oceans: a Heritage for the Future” and designed by the renowned François Confino and Philippe Genty, the pavilion featured a large-scale multimedia show that presented the oceans as stimulators of imagery, taking visitors on a voyage from the creation of the world to the present day. Combining traditional stage technology with highly innovative special effects and mechanical controls, gsmprjct intégration handled all of the logistics and technical direction of the project. Housed in a custom-built covered stadium with a seating capacity of 10,000, the show was performed over 500 times, making it the first World’s Fair show to be seen by over 3 million people.

The Oceania Virtual Reality Pavilion was the biggest hit of Lisbon’s Expo 98, attracting over half a million visitors in a four-month period. Even so, the average waiting time to get in was around 4 hours. It consisted of a virtual submarine voyage to an underwater base where visitors discovered the ruins of a lost civilization and encountered a sea monster before escaping back to the surface in Teleport capsules. Despite being the only pavilion at Expo 98 that required an additional admission fee, people spent hours waiting in line for this breathtaking 30-minute thrill ride that made use of seamlessly integrated simulators, virtual reality visors, and interactive projections. gsmprjct° was commissioned to design and produce "Oceania", planning the look and feel of the overall experience, in addition to acting as project manager, architectural coordinator, and general contractor. Divided into several rooms, the pavilion featured a 45-person simulated submarine ride and 70mm film, a 3D stereoscopic viewing system with custom content, and custom-designed motion simulators with audio-visual content.

The pavilion of Portugal hosted the Portuguese national representation during the event. It was designed by Álvaro Siza Vieira. The entrance to the building was covered by a large concrete veil, mimicking a paper sheet linking two main buildings and opening a wide urban space.

The total number of visitors of the Expo '98 reached 10,128,204, for a duration of 132 days. Admission prices (adult) were 5,000 escudos PTE ($34 USD at then-exchange rates) for one day, 12,500 escudos ($84) for three non-consecutive days, and 50,000 escudos ($334) for three months. The Oceans Pavilion, built to be the Lisbon Oceanarium after the Expo closed, had the longest lines. Other popular pavilions, with lines of up to five hours on busier days, included Portugal, Spain, Sweden, Germany, and Virtual Reality. 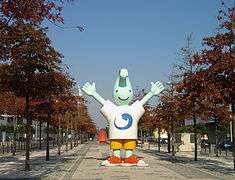 The Expo logo symbolizes the Sea and the Sun. It was conceived by Portuguese Augusto Tavares Dias, creative director in an advertising agency, and selected from 1,288 entries.

The Expo mascot was conceived by the Portuguese duo of painter António Modesto and sculptor Artur Moreira. It was selected from 309 entries. It is named Gil, after Portuguese navigator Gil Eanes.[3] The name was chosen by high-school student José Luís Coelho, from 765 entries. Gil can be now seen on telethons broadcast on RTP1.

The official music theme for the Expo 98 was called "Pangaea" and was written by Nuno Rebelo. It combined chants and instruments from the five continents over an epic full orchestral score.

Expo '98 closed its doors on 30 September 1998. The last day saw more than 300 thousand visitors cross its gates, swarming to see the closing fireworks show, the biggest ever presented in Portugal. The site remained closed until February 1999, when it reopened as Parque das Nações (Park of the Nations), a free-access park, keeping the gardens, Oceanarium (Europe's then-largest aquarium), observation tower, funicular, and the Virtual Reality pavilion. Other buildings were re-purposed for the opening, including:

Within Parque das Nações, every other building or vacant parcel lot was sold for office or living space, to offset the Expo's costs. The Virtual Reality Pavilion was closed on 31 August 2002 and later demolished. The area today is thriving, modern, stylish, and safe, attracting 18 million tourists a year to its gardens, museums, commercial areas and modern buildings. It has also become permanent residency for up to 25,000 people and one of Lisbon's premier business centers, with many multinational corporations basing their headquarters in its main avenue.

Parque Expo had lived beyond Expo '98, not just managing the infrastructure of Parque das Nações but, having acquired the know-how in urban conversion and planning, sold its advising and consultancy services to other cities around the world. The company was extinct at the end of 2012 and the former territory of the exposition became a new parish of Lisbon municipality.