Daejeon (Korean: [tɛdʑʌn]) is South Korea's fifth-largest metropolis. Daejeon had a population of over 1.5 million in 2010.[2] Located in the center of South Korea, Daejeon serves as a hub of transportation and is at the crossroads of major transport routes. The capital Seoul is about 50 minutes away by high-speed train.

Daedeok Innopolis (Daedeok Research and Development Special Zone) is composed of 28 government-funded research institutions, as well as 79 private research institutes with as many as 20,000 researchers. In addition, Daejeon established the World Technopolis Association (WTA) in 1998 with the view of realizing regional development through international cooperation with world science cities. The WTA has grown to have 67 members from 32 countries, and it actively cooperates with many international organizations including UNESCO as its official consultative body.

Human beings first settled in the Daejeon region during the Stone Age. It was occupied and in use as strategic military ground in various times by people such as the Usul-gun of Baekje, Bipung-gun of Silla, and the Hoideok-hyeon, Yuseong-hyeon, Deokjin-hyeon, and Jinjam-hyeon. During the Joseon Kingdom period, it remained occupied by the Hoideok-hyeon and Jinjam-hyeon of Gongju Mokha. In 1895, most of the area was made part of Hoideok-gun and Jinjam-gun, excluding some parts that belonged to Gongju-gun.[4]

The Daejeon area was historically known as Hanbat (한밭),[5] a native Korean term for "large field", during the Joseon Dynasty. "Daejeon" simply means the same thing in Hanja.

Historically, Daejeon was a small village without many residents. However, in 1905, the Gyeongbu Railway began operations from Seoul to Busan, opening a station at Daejeon. In 1926 under the rule of the Japanese government, the Honam Railway was built between Mokpo and Daejeon, transforming the latter into a major transportation hub. Because of its location and proximity to means of transportation, Daejeon grew quickly.

In 1932, the capital of Chungnam province was moved from Gongju to Daejeon. During the Korean War, the city was the site of an early major conflict: the Battle of Taejon.

Since then, changes have been made to the city's boundaries. Its official names have evolved, as well. Among the boundary modifications include one that effectively made the nearby town of Daedeok a part of the city in 1983. Then, in the late 1980s, Daejeon was elevated to the status of Special City (Jikhalsi), thus became a separate administrative region from Chungcheongnam-do. In 1995, all South Korean Special Cities were again renamed as Metropolitan Cities, which is reflected in the current official name of Daejeon, Daejeon Metropolitan City (대전광역시).

In 1997, the Daejeon Government Complex was constructed as part of an effort to move some government offices away from the densely populated capital, Seoul.[6] The population of Daejeon increased dramatically as a result.[7]

Walking path along the Gap River

Daejeon lies between latitudes N36°10'50" and N36°29'47" and longitudes E127°14'54" and E127°33'21" near the middle of South Korea. It is 167.3 km (104.0 mi) from Seoul, 294 km (183 mi) from Busan and 169 km (105 mi) from Gwangju. Sejong City, which is planned to be the new administrative capital of South Korea, will also be close by. The city lies inside a great circle and is surrounded by several mountains, and Gyeryongsan National Park straddles the city border to the west. The city is divided into five boroughs: Seogu (서구), Donggu (동구), Yuseonggu (유성구), Daedeokgu (대덕구), and Junggu (중구). Three streams flow through the city from south to north, eventually joining with the Geum River: Gapcheon (갑천), Yudeungcheon (유등천), and Daejeoncheon (대전천).

Daejeon has a monsoon-influenced, four-season climate that lies within the transition between the humid subtropical and humid continental climatic regimens (Köppen Cwa/Dwa, respectively). Monthly mean temperatures range from −1.0 °C (30.2 °F) in January to 25.6 °C (78.1 °F) in August.

Daejeon is divided into 5 districts ("Gu"):

The middle of the city or the new central business district called Dunsan is where the effort has manifested itself. Newer apartment complexes, albeit structurally similar to those of the rest of the city, sprung up around the new government structures being constructed concurrently in just a few years starting from the mid-1990s. Newer municipal buildings including the city's courts and the province's main parliamentary building soon followed. The result is a several square mile neighbourhood full of restaurants, standard Korean western-type bars and coffee shops. The Dunsan area is a place for the workers of the new Daejeon to live close to their offices, most able to walk to work, and dine and shop in a new urban environment.

Known as the Silicon Valley of Korea, Daejeon is the home of private and public research institutes, centers and science parks (e.g., the R&D centers of Samsung, Institute of Information Technology Advancement, LG, Korea University of Science and Technology, Electronics and Telecommunications Research Institute and others are in Daedeok Science Town in Yuseong-gu.

Chungnam National University, a major national university established for the South Chungcheong province, Pai Chai University, which is one of the oldest private universities in South Korea, and Woosong University, and Mokwon University are in the city.

Hannam University, in O-Jeong Dong, is another university in the city. It has plans to enlarge its campus in the next few years by expanding into a campus it acquired from the neighbouring Taejon Christian International School, which is now in the Techno Valley area in northern Daejeon.

The research institutes and universities in Daedeok Valley have spun off multiple startups. Korea has invested heavily in building up the research expertise for over 30 years, creating long-term research programs. Over 7,000 Ph.D researchers are in the sciences in Daedeok[11] and it had the most application for patents during 2000–2011 among the National Industrial Complex.

On 16 May 2013, Daejeon was selected as an International Science Business Belt. [12]

Besides a tire production facility, Hankook Tire has its main R&D centre in Daejeon.[13]

In 1993 an international exposition (Expo '93) was held at Daejeon. The expo bridge was designed by Hui Lee Shun. Several landmarks, such as the Hanbit Tower and the Expo Bridge, were built at this time. After the exposition ended, the grounds were refurbished as Expo Science Park. Next to the park is the National Science Museum, which had moved to its current location in 1990.[14]

Most of the cultural centres and sight seeing places are located in Yuseong-gu district with the exception of Ppuri park and Daejeon Zoo.

The Daejeon Museum of Art, located in Dunsan Grand Park, is an art museum focused on the convergence of art and technology. Since it was established in 1998, numerous exhibitions on contemporary art have been held. Another important cultural institution is the Daejeon Philharmonic Orchestra, which performs in Daejeon Culture & Arts Center and other local venues, and which recently completed several international tours, including visits to the United States and Japan.

Daejeon is a provincial center for the television, newspaper and publishing industries.

According to the census of 2005, of the people of Daejeon, 21.8% follow Buddhism and 31.2% follow Christianity (20.5% Protestantism and 10.7% Catholicism).[16] About 47% of the population is mostly not religious or follows Muism and other indigenous religions.

The Daejeon World Cup Stadium was constructed in preparation for the 2002 FIFA World Cup. Several games have been held there, including the South Korea vs. Italy match in the second round. It is also the current home for the K League Challenge football club Daejeon Citizen, and National League side Daejeon Korail FC. Daejeon also hosts amateur football club Daejeon de la Cuba, which plays in the Super Sunday Football League.

The Hanwha Eagles of the KBO League play their home games at Daejeon Baseball Stadium in Busa-dong.

Daejeon is a center of transportation in South Korea, where two major expressways, Gyeongbu Expressway and Honam Expressway, and two major railway lines, Gyeongbu railway and Honam railway, are joined. Travel time between Daejeon and Seoul using the KTX high-speed rail system is about 50 minutes. The nearest airport to Daejeon is Cheongju Airport, about a thirty-minute drive north of Daejeon. However, there are also direct bus connections to Incheon International Airport.

One line, Daejeon Subway Line 1, of a planned five-line subway system has been operating since April 17, 2007 (partial operations on this line began on March 16, 2006). This subway line connects Daejeon Station, located in the original city center, with the more modern and more recently developed sections of this city, including Dunsan, where the city hall and a number of national government buildings are located.

Notable differences between the Daejeon subway and the Seoul subway include narrower cars, no doors connecting cars, four cars per train rather than ten, and storage space under the seats for use by passengers.[17] The plastic tokens for toll are read by a proximity sensor when entering the turnstiles, and then inserted into a slot when exiting. The design of the tokens allows them to be used for advertising.[18] Platform screen doors are installed in the subway stations. 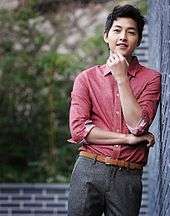 Actor Song Joong-ki is a native of Daejeon