The Eye of Providence can be seen on the reverse of the Great Seal of the United States, seen here on the US $1 bill

The Eye of Providence (or the all-seeing eye of God) is a symbol showing an eye often surrounded by rays of light or a glory and usually enclosed by a triangle. It represents the eye of God watching over mankind (or divine providence).[1][2][3] In the modern era, a notable depiction of the eye is the reverse of the Great Seal of the United States, which appears on the United States one-dollar bill.

The association of an eye with the concept of Divine Providence did not emerge until well into the Christian Era, in Renaissance European iconography, where it was an explicit image of the Christian Trinity. Seventeenth-century depictions of the Eye of Providence sometimes show it surrounded by clouds or sunbursts.[4] 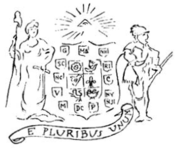 In 1782, the Eye of Providence was adopted as part of the symbolism on the reverse side of the Great Seal of the United States. It was first suggested as an element of the Great Seal by the first of three design committees in 1776 and is thought to be the suggestion of the artistic consultant, Pierre Eugene du Simitiere.[5]

In his original proposal to the committee, Du Simitiere placed the Eye over shields symbolizing each of the original thirteen states of the Union. On the version of the seal that was eventually approved, the Eye is positioned above an unfinished pyramid of thirteen steps (again symbolizing the original States, but incorporating the nation's potential for future growth). The symbolism is explained by the motto that appears above the Eye: Annuit Cœptis, meaning "[Providence] approves (or has approved) [our] undertakings".[6]

Perhaps due to its use in the design of the Great Seal, the Eye has made its way into other American seals and logos, for example: the Seal of Colorado and DARPA's Information Awareness Office.

Today, the Eye of Providence is often associated with Freemasonry. The Eye first appeared as part of the standard iconography of the Freemasons in 1797, with the publication of Thomas Smith Webb's Freemasons Monitor.[7] Here, it represents the all-seeing eye of God and is a reminder that man's thoughts and deeds are always observed by God (who is referred to in Masonry as the Great Architect of the Universe). Typically, the Masonic Eye of Providence has a semi-circular glory below the eye. Sometimes the Eye is enclosed by a triangle.

Popular among conspiracy theorists is the claim that the Eye of Providence shown atop an unfinished pyramid on the Great Seal of the United States indicates the influence of Freemasonry in the founding of the United States. However, common Masonic use of the Eye dates to 14 years after the creation of the Great Seal. Furthermore, among the members of the various design committees for the Great Seal, only Benjamin Franklin was a Mason (and his ideas for the seal were not adopted). Indeed, many Masonic organizations have explicitly denied any connection to the creation of the Seal.[8][9]

Coats of arms and seals

The Eye of Providence appears on many coats of arms and official seals, such as: 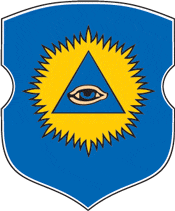 Coat of arms of Braslaw, Belarus

The Eye appears on the following currency: