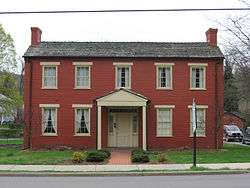 The house in which Delta Tau Delta was founded

Delta Tau Delta Fraternity was founded in 1858, though some early documents reference the founding in 1859 or 1860, at Bethany College in Bethany, Virginia (now West Virginia).[4] The social life on campus at that time centered around the Neotrophian Society, a literary society.

According to Jacob S. Lowe, in late 1858 a group of students met in Lowe's room in the Dowdell boarding house to discuss means to regain control of the Neotrophian Society and return control to the students at large. The underlying controversy was that the Neotrophian Society, in the opinion of the eight men who formed Delta Tau Delta, had awarded a literary prize after a rigged vote.[5] A constitution, name, badge, ritual and motto were devised, and Delta Tau Delta was born.[6]

Member Henry King Bell of Lexington, Kentucky, heard of the Civil War's effects on Bethany College and the membership of Delta Tau Delta. After riding to Bethany and realizing that the longevity of Delta Tau Delta was at risk, Bell traveled to Canonsburg, Pennsylvania. On February 22, 1861 Bell rode to Jefferson College (would later merge with Washington Academy to become the present day Washington & Jefferson College) from Bethany to bring the designation of the Alpha Chapter and the governance of the Fraternity back to his home campus.. In response to Jefferson College merging with the Washington Academy, an election was held at the General Convention (later to be renamed the Karnea). Ohio Wesleyan then assumed the Alpha designation. Before the Alpha designation was finally transferred to Allegheny College (its current location), the Ohio Wesleyan chapter dissolved temporarily because of a lack of membership.

After the Ohio Wesleyan chapter disappeared in 1875, the Allegheny College chapter, the fourth and final chapter to hold Alpha designation, assumed control of the fraternity. Allegheny College member James S. Eaton, traveled to Delaware, Ohio, to collect what remained of the organization's records and to investigate what had happened the Ohio Wesleyan chapter. Eaton brought the "Alpha" designation back with him to Allegheny College, where a group of undergraduates managed the larger organization as well as their own chapter. During that time a magazine was established and 15 chapters were founded, of which eight survive (several others were reestablished later).

In 1886, Delta Tau Delta merged with the secret society known as the Rainbow Fraternity, a southern fraternity founded in 1848 at the University of Mississippi.[7]

The Delta Tau Delta Founders House was listed on the National Register of Historic Places in 1979.[8]

Members of Delta Tau Delta are informally referred to as "Delts."

The eight men considered to be the Founders of the Delta Tau Delta fraternity are:

In 2016, the chapter at West Virginia University was kicked off campus for filming an inappropriate audition for the "Real World"'TV series.

In 2015, the chapter at the University of Arizona was kicked off campus for hazing pledges and other repeated offenses.[10][11]

In February 2015, the chapter at Boston University lost its recognition status on campus due to facilitating underage drinking on two separate occasions.[12] The chapter was reinstated that September year.[13]

In 2014, the chapter at the University of South Carolina was closed by the fraternity's national leadership for multiple alcohol citations.[14]

In 2014, the chapter was closed at West Kentucky University for repeated poor academic performance and low membership.[15]

In 2012, the chapter at the University of Oklahoma was temporarily suspended for hazing pledges.[16]

In 2011, the chapter at Lehigh University was suspended for three years for hazing pledges.[17]