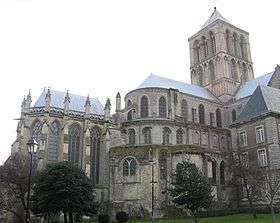 The abbey was the first producer of Bénédictine, a herbal liqueur, based on brandy.[1]

It was founded in 658 by Waningus, a Merovingian count, for nuns.[2] Another convent he founded in 660, near the site of the Precious Relic, was destroyed by the Vikings in 842. Around the Ducal palace, the foundations of two chapels have been found.

After more Viking raids, Richard I of Normandy rebuilt the church. It was Richard II who invited Guillaume de Volpiano (Guglielmo da Volpiano) in 1001 to rekindle the life of the abbey, under Benedictine rules.[3] These two Norman rulers, who were originally buried outside,[4] were later interred in 1162 by Henry II of England within the southern transept of the gothic abbey church.[5] Guillaume de Volpiano is buried in one of the northern chapels.

The abbey at Fécamp was critical in the Norman conquest of England. Edward the Confessor granted the royal minster church in Steyning to the abbey, in gratitude to his Norman protectors during his exile. With its large, wealthy manor lands and thriving port, this grant was to take effect after the death of Aelfwine, Bishop of Winchester, who had charge of Steyning. The bishop died in 1047 and ecclesiastical jurisdiction then passed directly to Pope Clement II. In the same way, Fécamp Abbey itself answered to no Norman bishop, only to the Pope. The gift was later confirmed by William the Conqueror. 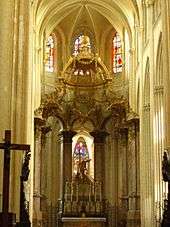 The chancel of the church at Fécamp Abbey.

A nearby port with land around Rye, Winchelsea and Hastings had already been given to the same Abbey by King Cnut, to honour a promise made by his wife Emma of Normandy's first husband King Aethelred. The monks had hardly had time to settle in when in 1052 Godwin, Earl of Wessex expelled them from Steyning and seized it for himself. His son Harold decided to keep it upon his accession, rather than restore it to them. This made commercial and strategic sense (Harold did not want a Norman toehold at a potential invasion port), but William responded by swearing on a knife before setting out for England to recover it for the monks.[6]

This gained him a ship from the abbey and, upon his victory at Hastings, he made good his promise and returned Steyning to the abbey, with whom it remained until the 15th century.

The charter acquitted the grantees of all earthly service and subjection to barons, princes, and others, and gave them all royal liberties, custom, and justice over all matters arising in their land; and threatened any who should infringe these liberties with an amercement of £100 in gold.[7]

They moved the remains of the local saint, Cuthman of Steyning, to the mother abbey at Fecamp. The abbey also provided William with Remigius de Fécamp, the first Bishop of Lincoln.

The Abbey church of the Holy Trinity was built between 1175 and 1220 using the cream-coloured stone of Caen. Under the Plantagenets, the scriptorium at Fécamp produced numerous illuminated manuscripts.