Nawab Begum Faizunnesa Choudhurani (1834–1903) was Zamindar of Homnabad-Pashchimgaon Estate in present-day Comilla District, Bangladesh.[2] She is most famous for her campaign for female education and other social issues. In appreciation of her social work, in 1889 Queen Victoria awarded Faizunnesa the title of "Nawab", making her the first female Nawab in South Asia.[3][4][5][6]

Faizunnesa’s educational and literary work belonged to the post-1857 era when Muslims in India started having the full thrust of colonial acrimony and were at the nadir of deprivation and discrimination. Faizunnesa embarked on establishing schools for women in that cultural context. Metaphorically, she sought to rescue the community from the menace of despair and pessimism by portraying a Muslim hero in Rupjalal and thus gave them hope and confidence.[7]

An advocate of female education, a philanthropist and social worker, Faizunnesa was born in Comilla in what is now Bangladesh. She was married to a distant cousin and neighboring zamindar, Muhammad Gazi, in 1860 as his second wife only to be separated after mothering two daughters, Arshadunnesa and Badrunnesa. She became a zamindar after her mother's death in 1883 and became increasingly involved in social and charitable work, and thus in 1889 earned the honor of being the first woman Nawab of British India. She penned few other literary pieces such as Sangeet Saar, Sangeet Lahari and Tattwa O Jatiya Sangeet, and is renowned for her pioneering educational and charitable work and establishing of schools, madrasas and hospitals. However, Rupjalal has remained her most important work and attracted more research and critical attention.[7] 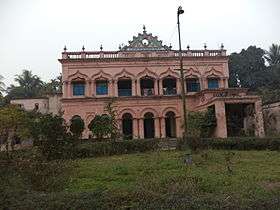 Chowdhurani was born in 1834 in the village of Pashchimgaon under Laksham in the district of Comilla.[3] Her father was Ahmed Ali Chowdhury also known as Shahzada Mirza Aurangazeb, Nawab, Khan Bahadur, a descendent of the Mughal emperors and zamindar of Homnabad-Pashchimgaon estate.[1] Faizunnessa was raised in a conservative Muslim family, where the women would maintain a strict purdah system. She received no formal education but she educated herself in her library during leisure time. She was proficient in Arabic, Persian, Sanskrit and Bengali language. In 1860, Chowdhurani was married to a distant cousin and neighboring Zamindar, Muhammad Gazi, becoming his second wife. But the couple became separated and Faizunnesa began to live with her paternal family.[5]

After her mother's death in 1883, Faizunnesa inherited her property and became zamindar of Pashchimgaon. She became increasingly involved in social work after becoming zamindar. In 1873, Faizunnesa Choudhurani established a high school for girls in Comilla, which is one of the earliest female schools privately established in Indian subcontinent, which is now called Nawab Faizunnesa Government Girls' High School.[5][8][9] She also founded a school at Pashchimgaon that was later upgraded to a college and now named as Nawab Faizunnesa Degree College.[3] In 1893, Faizunnesa established a charitable dispensary in her village for women in purdah, particularly destitute women. She also built a hospital for women, Faizunnesa Zenana Hospital in Comilla. In addition, she built mosques and contributed towards the development of roads and ponds.[10] Faizunnesa patronised different newspapers and periodicals, including Bandhab, Dhaka Prakash, Musalman Bandhu, Sudhakar, and Islam Pracharak. Before her death in 1903 she donated her entire property to the nation.[2]

Originally written in Bangla, Nawab Faizunnesa’s (1834-1903) Rupjajal was published from Dhaka in 1876. Fayeza S. Hasanat’s translation into English of the long-neglected semi-autobiographical allegory with an introduction and commentary has for the first time secured a place for Faizunnesa and for her work among the global readership. Previously, perhaps, the only notable mention Faizunnesa had in any significant research work was in Sonia Nishat Amin’s The World of Muslim Women in Colonial Bengal, 1876-1939 (Brill, 1996) that regards Rupjalal’s publication year as a significant marker in the history of Bengali Muslim women’s literary practice, and the founding of Lady Brabourne College in 1939 as the culmination of Muslim women’s education, since that was the first time it had government support during the colonial period.[7]

Although Amin regards Faizunnesa as the first significant modern Muslim woman writer of former Bengal, it is still early to make a definitive assumption in this regard. New research is unearthing more and more past Bengali Muslim women writers. Now we know about Rahimunnessa of the eighteenth century whose poetry manuscript was first discovered in 1955, about Rahima and Zamirunnessa from Chittagong who the literary historians believe wrote in the first half of the nineteenth century. These three still remain largely obscure, and probably for this reason Taherunnesa is commonly known as the earliest Bengali Muslim woman writer whose ‘Bamagoner Rachana’ (Writing by Women) appeared in Bamabodhini Patrika in 1865. However, since she is known to have appeared in the magazine just once along with her article and since we do not know much about her life except that she attended Boda School for Girls, early history of Bengali Muslim women’s writing generally starts from Nawab Faizunnesa, information about whose life and work is available. The only Bengali Muslim woman litterateur who has so far received comparatively a greater amount of research attention is Begum Rokeya Sakhawat Hossain (1880-1932), and that with certain amount of disbelief and amazement as she is presumed to stand out alone without any significant predecessors or successors to form a continuous literary tradition of Bengali Muslim women. Between Faizunnesa and Rokeya, there were few more: Latifunnesa, whose ‘Bangiya Musalman Lekhikader Prati’ (To the Bengali Muslim Women Writers) was published in Bamabodhini Patrika in 1897, and Azizunnesa, the first known Muslim woman to have been published in a Muslim-run magazine, Islam Pracharak, as her poem ‘Hamd Orthat Ishwar Stuti’ (In Praise of God) was published in it in 1902.[7]

Rupjalal is a story of prince Jalal and two heroines, Rupbanu and Hurbanu. It narrates Jalal’s heroic and sexual exploits and his marriages to both the heroines. Hasanat reads Rupjalal “as a manifesto of Muslim women’s sexual defiance and subordination in nineteenth century Bengal” (p. 2). However, the text can also be read as a counter narrative to the discourse of nineteenth-century Western literary orientalism that tends to emasculate Muslim men and represents Muslim women as always in the lookout for a gaze at Western Christian heroes only to sexually offer themselves to their supposed dream-lovers. Contrary to the image of emasculated Muslim man, Faizunnesa depicts an ‘athletic and strong’ Muslim hero of virility and valor who “grew so handsome at sixteen / That wherever he went, women were seen / Flocking around him; his manliness / Turned the meekest housewives into temptresses / And each of these women longed to be the one / To be loved by this handsome man!” (50) As opposed to orientalist representations, in Rupjalal it is a Muslim hero who is at the centre of Muslim women’s imagination.[7]

Hasanat’s treatment of Muslim society as opposed to Hindu society in colonial Bengal with regard to the status of women may also not stand up to academic scrutiny. She claims: “Muslim society’s treatment of the female body was totally different from that of an orthodox Hindu or a liberal Brahmo society” (p. 2). She attempts to depict a favourable picture of the Hindu community as opposed to the Muslim community, stating: ‘While “the [Hindu] nationalist male” thought of his own wife/sister/daughter as “normal” precisely because she was no more a “sex object,” a Muslim male reformer considered his wife/sister/daughter always as a sex object’ (p. 13).[7]

Hasanat did a noble work by introducing Faizunnesa’s work to a global readership and for her beautiful, reader-friendly translation. What makes her work unwieldy is her audacious attempts to make big theological statements about Islam, and that without adequate knowledge about the religion. However, her efficient translation of Rupjalal will facilitate more interpretations and encourage further research on the text.[7]