The Bengal Presidency was once the largest colonial subdivision (presidency) of British India, with its seat in Calcutta, the capital of British-held territories in South Asia until 1911. At its territorial peak in the 19th century, the presidency extended from the present-day Khyber Pakhtunkhwa province of Pakistan in the west to Burma, Singapore and Penang in the east. The Governor of Bengal was concurrently the Viceroy of India for many years. Most of the presidency's territories were eventually incorporated into other British Indian provinces and crown colonies. In 1905, Bengal proper was partitioned, with Eastern Bengal and Assam headquartered in Dacca and Shillong (summer capital). British India was reorganised in 1912 and the presidency was reunited into a single Bengali-speaking province.

The Bengal Presidency was established in 1765, following the defeat of the last independent Nawab of Bengal at the Battle of Plassey in 1757. Bengal was the economic, cultural and educational hub of the British Raj. It was the centre of the late 19th and early 20th century Bengali Renaissance and a hotbed of the Indian Independence Movement.

The Partition of British India resulted in Bengal's division on religious grounds, between West Bengal and East Bengal.

Administrative reform and the Permanent Settlement 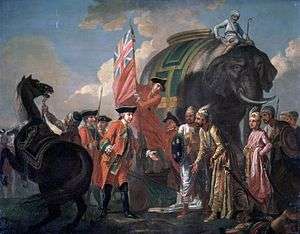 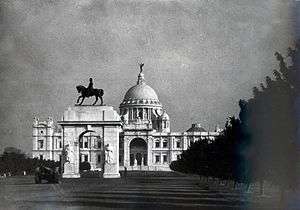 The Victoria Memorial, Kolkata, built in honour of Queen Victoria, Empress of India

A steam engine of the Bengal Provincial Railway, 1905. Bengal was the sixth earliest region in the world to have a railway network in 1854, after Britain, the United States, Italy, France and Spain.[1]

Under Warren Hastings (British Governorships 1772-1785) the consolidation of British imperial rule over Bengal, and the conversion of mere trade into an entire military occupied territory under a military-civil government got solidified. To another member of the civil service, John Shore, afterwards Lord Teignmouth, was due the formation of a regular system of legislation. Acting through Lord Cornwallis, then Governor-General, he ascertained and defined the rights of the landholders in the soil. These landholders under the previous system had started, for the most part, as collectors of the revenues, and gradually acquired certain prescriptive rights as quasi-proprietors of the estates entrusted to them by the government. In 1793 Lord Cornwallis declared their rights perpetual, and made over the land of Bengal to the previous quasi-proprietors or zamindars, on condition of the payment of a fixed land tax. This piece of legislation is known as the Permanent Settlement of the Land Revenue. It was designed to "introduce" ideas of property rights to India, and stimulate a market in land. The former aim misunderstood the nature of landholding in India, and the latter was an abject failure. The Cornwallis code, while defining the rights of the proprietors, failed to give adequate recognition to the rights of the under-tenants and the cultivators. This remained a serious problem for the duration of British Rule, as throughout the Bengal Presidency ryots (peasants) found themselves oppressed by rack-renting landlords, who knew that every rupee they could squeeze from their tenants over and above the fixed revenue demand from the Government represented pure profit. Furthermore, the Permanent Settlement took no account of inflation, meaning that the value of the revenue to Government declined year by year, whilst the heavy burden on the peasantry grew no less. This was compounded in the early 19th century by compulsory schemes for the cultivation of Opium and Indigo, the former by the state, and the latter by British planters (most especially in the district of Tirhut in Bihar). Peasants were forced to grow a certain area of these crops, which were then purchased at below market rates for export. This added greatly to rural poverty.

So unsuccessful was the Permanent Settlement that it was not introduced in the North-Western Provinces (taken from the Marathas during the campaigns of Lord Lake and Arthur Wellesley) after 1831, in Punjab after its conquest in 1849, or in Oudh which was annexed in 1856. These regions were nominally part of the Bengal Presidency, but remained administratively distinct. Officially Punjab, Agra and Allahabad had Lieutenant-Governors subject to the authority of the Governor of Bengal in Calcutta, but in practice they were more or less independent. The only all-Presidency institutions which remained were the Bengal Army and the Civil Service. The Bengal Army was finally amalgamated into the new British-Indian Army in 1904-5, after a lengthy struggle over its reform between Lord Kitchener, the Commander-in-Chief, and Lord Curzon, the Viceroy.

Main articles: Partition of Bengal (1905) and Eastern Bengal and Assam 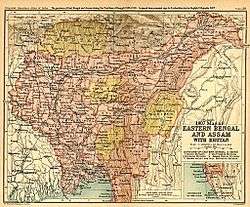 The partition of the large province of Bengal, which was decided upon by Lord Curzon, was carried into execution in October 1905. The Chittagong, Dhaka and Rajshahi divisions, the Malda District and the States of Hill Tripura, Sylhet and Comilla were transferred from Bengal to a new province, Eastern Bengal and Assam; the five Hindi-speaking states of Chota Nagpur, namely Changbhakar, Korea, Surguja, Udaipur and Jashpur State, were transferred from Bengal to the Central Provinces; and Sambalpur State and the five Oriya states of Bamra, Rairakhol, Sonepur, Patna and Kalahandi were transferred from the Central Provinces to Bengal.

The Indian Councils Act 1909 expanded the legislative councils of Bengal and Eastern Bengal and Assam provinces to include up to 50 nominated and elected members, in addition to three ex officio members from the executive council.[3]

The partition of Bengal proved highly controversial, as it resulted in a largely Hindu West Bengal and a largely Muslim East. Serious popular agitation followed the step, partly on the grounds that this was part of a cynical policy of divide and rule, and partly that the Bengali population, the centre of whose interests and prosperity was Calcutta, would now be divided under two governments, instead of being concentrated and numerically dominant under the one, while the bulk would be in the new division. In 1906–1909 the unrest developed to a considerable extent, requiring special attention from the Indian and Home governments, and this led to the decision being reversed in 1911.

At the Delhi Durbar on December 12, 1911, King George V announced the transfer of the seat of the Government of India from Calcutta to Delhi, the reunification of the five predominantly Bengali-speaking divisions into a Presidency (or province) of Bengal under a Governor, the creation of a new province of Bihar and Orissa under a lieutenant-governor, and that Assam Province would be reconstituted under a chief commissioner. On March 21, 1912 Thomas Gibson-Carmichael was appointed Governor of Bengal; prior to that date the Governor-General of India had also served as governor of Bengal Presidency. On March 22, the provinces of Bengal, Bihar and Orissa, and Assam were constituted.[5]

The Government of India Act 1919 increased the number of nominated and elected members of the legislative council from 50 to 125, and the franchise was expanded.[6]

Bihar and Orissa became separate provinces in 1936. Bengal remained in its 1912 boundaries until Independence in 1947, when it was again partitioned between the dominions of India and Pakistan.

The Government of India Act 1935 made the Bengal Presidency into a regular province, enlarged the elected provincial legislature and expanded provincial autonomy vis a vis the central government. In the elections held in 1937, the Indian National Congress won a maximum of 54 seats but declined to form the government. The Krishak Praja Party of A. K. Fazlul Huq (with 36 seats) was able to form a coalition government along with the All-India Muslim League.[8][9]