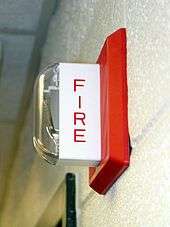 A fire alarm notification appliance that is used in the United States and Canada, the (Wheelock MT-24-LSM) with a strobe light

A fire alarm system is number of devices working together to detect and warn people through visual and audio appliances when smoke, fire, carbon monoxide or other emergencies are present. These alarms may be activated automatically from smoke detectors, and heat detectors or may also be activated via manual fire alarm activation devices such as manual call points or pull stations. Alarms can be either motorized bells or wall mountable sounders or horns. They can also be speaker strobes which sound an alarm, followed by a voice evacuation message which warns people inside the building not to use the elevators. Fire alarm sounders can be set to certain frequencies and different tones including low, medium and high, depending on the country and manufacturer of the device. Most fire alarm systems in Europe sound like a siren with alternating frequencies. Fire alarm sounders in the United States and Canada can be either continuous or set to different codes such as Code 3. Fire alarm warning devices can also be set to different volume levels. Smaller buildings may have the alarm set to a lower volume and larger buildings may have alarms set to a higher level.

After the fire protection goals are established – usually by referencing the minimum levels of protection mandated by the appropriate model building code, insurance agencies, and other authorities – the fire alarm designer undertakes to detail specific components, arrangements and interfaces necessary to accomplish these goals. Equipment specifically manufactured for these purposes is selected and standardized installation methods are anticipated during the design. In the United States, NFPA 72, The National Fire Alarm Code is an established and widely used installation standard. In Canada, the ULC is the standard for the fire system. The equivalent standard in the United Kingdom is BS 5839 Part 1.

EN 54 is a mandatory standard for fire detection and fire alarm systems in the European Union, aiming to establish harmonized technical standards against which products in the field should be benchmarked and certified by a qualified testing house known as a Notified Body. Every product for fire alarm systems must achieve the standards laid out in EN 54 in order to properly carry a CE mark, which is in turn required if the product is to be delivered and installed in any country of the EU. It is a standard widely used around the world.[1] 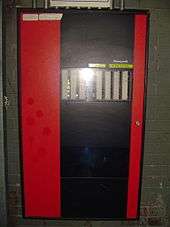 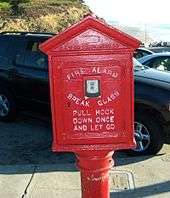 A publicly accessible alarm box on a street in San Francisco 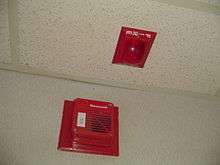 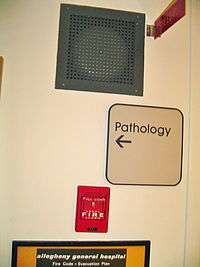 Fire alarm systems in non-domestic premises are generally designed and installed in accordance with the guidance given in BS 5839 Part 1.There are many types of fire alarm systems each suited to different building types and applications. A fire alarm system can vary dramatically in both price and complexity, from a single panel with a detector and sounder in a small commercial property to an addressable fire alarm system in a multi-occupancy building.

Categories for automatic systems are further subdivided into L1 to L5, and P1 to P2.

An important consideration when designing fire alarms is that of individual zones. The following recommendations are found in BS 5839 Part 1:

Also, the NFPA recommends placing a list for reference near the FACP showing the devices contained in each zone.