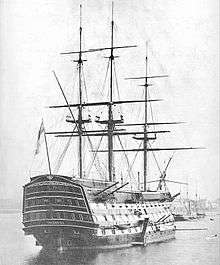 First rate was the designation used by the Royal Navy for its largest ships of the line. Originating in the Jacobean era with the designation of Ships Royal capable of carrying at least 400 men, the size and establishment of first-rates evolved over the following 250 years to eventually denote ships of the line carrying at least 80 cannons across three gundecks.[1] By end of the eighteenth century, a first-rate routinely carried 100 guns and more than 850 crew, and had a measurement (burthen) tonnage of some 2,000 tons.

The concept of a rating system for English naval vessels dates to the accession of James I of England, following which the fleet was formally divided into "great', "middling" and "lesser" craft. A 1618 commission of enquiry added a further designation of "Ships Royal" for the largest and most prestigious vessels in the fleet, each capable of carrying at least 400 men.[2][3]

The first Ships Royal - Elizabeth Jonas, Triumph, White Bear, Merhonour, Ark Royal and Victory - were all converted galleons and included three very old vessels that had fought against the Spanish Armada in 1588. Their condition was generally poor, with Elizabeth Jonas and Triumph already completely unserviceable and White Bear so unseaworthy that she was sold for scrap in 1627.[4][5] 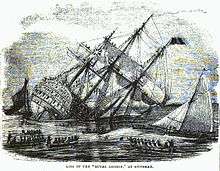 The first-rate Royal George sank at anchor in 1781 after she was flooded through her lower gunports.

Early first rates had as few as 60 guns, but by the mid-1660s they generally carried between 90 and 100 guns. By the early years of the 18th century, it had become accepted that 100 guns was the standard criterion for a first rate in wartime (while 90 guns, later 98 guns, became the standard wartime ordnance for a second rate). (In peacetime, all ships of the line carried a reduced complement of guns.) Towards the close of the century, ships were built with more than 100 guns, and they too were classed as first rates.

In addition to the rated number of carriage-mounted guns (which included the heaviest calibre available mounted on their lower decks, with smaller guns on the decks above), first rates also carried a number of anti-personnel guns, initially swivel-mounted weapons. From the invention of the slide-mounted carronade in the later 1770s, first rates (like other warships), could mount a number of these weapons on their quarterdecks and forecastles to augment their short-range firepower, but they were not included in the ship's rating until 1817 except where they replaced carriage-mounted guns.

Although very powerful, the Navy's seventeenth century first-rates were of limited utility at sea. For stability their lowest gundeck had to be very close to the waterline and its gunports could not be opened in anything but the calmest of seas. To do otherwise was to risk swamping the entire vessel, as occurred in 1781 when the first-rate Royal George sank at anchor at Spithead after the lower gunports were opened to air the ship.[7] There was also too little storage space to stow provisions for long voyages, and the ships themselves routinely proved unseaworthy in winter weather. As a consequence the seventeenth century first-rates were restricted to summer cruising, and then only in the English Channel and nearby waters.[8]

Ships of this size were extremely expensive to operate. As a result, the few first rates (the Royal Navy had only five completed in 1794) were typically reserved as commanding admirals' flagships. First rates were typically kept out of commission ("in Ordinary") during peacetime and only activated ("commissioned") during times of conflict. This had the added advantage of preserving them from the wear and tear that smaller ships experienced in spending long periods at sea. Spending time in ordinary could considerably extend a first rate's lifespan; for instance, by the time she fought in the Battle of Trafalgar, HMS Victory had been in service for 40 years, although a portion of this time was spent in Ordinary.

With first rates being the most powerful ships of the navy, it was common to compare them with the navies of other nations; frequently one sees the largest ships of those navies being referred to as first rates. Other nations had their own rating systems, notably the French Navy with its system of five formal rates or rangs.

Due to their unique importance as prestige warships, only a small number of first rates could be built and maintained at any one time.[9] Thus over the 250 years (approximately) that the rating system of the Royal Navy was used, only a relatively small number of these ships saw service.

Only one first rate has survived to the present. HMS Victory, Admiral Nelson's flagship at the Battle of Trafalgar, is preserved at HMNB Portsmouth and is in commission. The hull of the 112-gun HMS St Lawrence, which was built and operated entirely in fresh water during the War of 1812, survives intact in shallow water near shore in Kingston, Ontario and is a popular diving attraction. Two other noted first rates were HMS Royal Sovereign, which was broken up in 1841, and HMS Britannia, which was broken up in 1825. Both these ships had 100 guns. Later first rates such as the Caledonia and its several sisters had 120 guns. Other navies, notably those of France and Spain, also had similar ships with more than 100 guns, the most heavily armed being the Spanish Santísima Trinidad which, following a rebuilding in 1802, carried 140 guns.

The Royal Navy's use of the term "first-rate" to describe its largest and most powerful vessels is the origin of the modern English-language meaning of "exceptionally good" or "of the highest quality."[10]