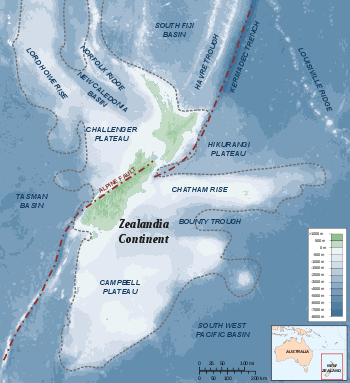 As with other countries, New Zealand’s 200 nautical miles exclusive economic zone gives its fishing industry special fishing rights.[1] It covers 4.1 million square kilometres. This is the sixth largest zone in the world, and is fourteen times the land area of New Zealand itself.[2][3]

New Zealand's wild fisheries captured 441,000 tonnes and earned over NZ$1 billion in exports in the fishing year 2006/07. The aquaculture of mussels, salmon and oysters earned another $226 million. This made seafood the country’s fifth largest export earner.[5]

There are about two tonnes of fish in the New Zealand fisheries for every New Zealander. Just under ten percent of this stock is harvested each year.[6] In the fishing year 2006/07, there were 1,316 commercial fishing vessels and 229 processors and licensed fish receivers, employing 7,155 people.[5] About 1.2 million or 31 percent of New Zealanders engage, at least occasionally, in recreational fishing with an annual recreational take of about 25,000 tonnes.[5]

Traditionally New Zealand's fishing industry was an inshore one largely confined to the domestic market. From 1938 to 1963, there was a licensing system operating, involving gear and area controls.[7] Starting in the 1960s, the offshore waters, outside the then 12 nautical mile territorial sea, were exploited by Japanese, Taiwanese, South Korean, and Soviet trawlers.[8]

In 1977 the 200 nautical mile exclusive economic zone was established. These zones were established because countries wanted protection from foreign fishing vessels. Because New Zealand’s territory includes the Chatham Islands and other outer islands, its EEZ is 4.1 million square kilometres, the sixth largest fishing zone in the world.

This was a huge resource, and expectations were high. The inshore fisheries had become over exploited, and the search was on for new offshore fisheries. New Zealand companies embarked on joint ventures with foreign companies. Trawling crews from other nations taught New Zealanders how to fish deep waters and in return got a share of the catch.[9]

By 1980 the consequences of the "Think Big" policy for the fishing industry were becoming very apparent. Mel Courtney, MP for Nelson and convenor of the Opposition fisheries' sub-committee on production and marketing, in asserting "the policy is falling apart", expressed the view of many. "The industry expanded so rapidly it was overcapitalized with too many boats...the inshore fleet expanded and joint venture and duty-free boats exerted further pressure" (Commercial Fishing June 1980 5).

Deep-water trawling is highly mechanised and massive capital investment is normally required to operate modern factory trawlers. These ships process everything caught on board. Even the guts and heads are processed into fishmeal, which is so valuable it is known as "brown gold". Elsewhere, major fisheries, such the northern hemisphere cod fisheries, were collapsing. Fishing companies in New Zealand were able to buy or lease the redundant trawlers cheaply. At the same time, the collapse of northern fisheries resulted in an unmet need in the world market for quality whitefish. Hoki and orange roughy from New Zealand were in demand.[9]

In 1986 New Zealand became the first country to introduce a property-rights based Quota Management System (QMS) system.[10][11] There are currently (2008) 129 species which are targeted commercially. There are about 60 species groups with a QMS allowance for customary Māori fishers, with a similar number for recreational fishers. The fisheries are managed through the Fisheries Act 1996, which sets out the rules and regulations and the QMS was administered by the Ministry of Fisheries until April 2012 when it was amalgamated into the Ministry for Primary Industries.

By 2000, the industry had developed from being a domestic supplier to exporting over 90 percent of the fish harvest.[8] 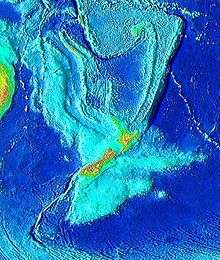 New Zealand is surrounded by an unusually complex underwater typography

Coastal estuaries dot New Zealand's 15,000 km coastline. Coastal fisheries have access to a large continental shelf, and further afield are large continental rises. Together these relatively shallow fishing grounds occupy about thirty percent of the area of the EEZ. Yet further out in the deep ocean lie undersea mountain ranges and volcanoes, and deep oceanic trenches. The 10,000 metre deep Kermadec Trench is the second deepest trench on Earth.[4]

The high seas are those areas of ocean that not covered by any country’s Exclusive Economic Zone. New Zealand has international obligations to ensure New Zealand flagged vessels are aligned with proper conservation and management of the high seas fisheries. These are met in Part 6A of the Fisheries Act 1996. These obligations come from the United Nations Convention on the Law of the Sea and the 1995 Straddling Fish Stocks Agreement.[12]

The Treaty of Waitangi guaranteed the Māori, the indigenous people of New Zealand, “undisturbed possession” of the fisheries until they chose to dispose of them to the Crown. They have been provided with a substantial stake in commercial fishing as part of the Treaty Settlement. After the quota management system was established, the government purchased back ten percent of the quota share and gave it to the Treaty of Waitangi Fisheries Commission for the benefit of Māori. In 1992, the government allocated a cash settlement to Māori which they used to buy a half share of Sealord, the countries largest fishing company. In addition, the government has given Māori twenty percent of the commercial quota share of new species introduces to the quota management system, and the equivalent of twenty percent of all marine farming space created around New Zealand coasts and harbours. In 2004, Parliament approved the allocation of additional significant fisheries assets to iwi. Te Ohu Kai Moana is implementing this allocation. Māori have now built their commercial stake to the point where they control or influence more than thirty percent of the commercial fisheries.[13][14][15][16][17]