For the officer of arms, see New Zealand Herald Extraordinary. 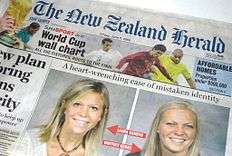 The New Zealand Herald is a daily newspaper published in Auckland, New Zealand, owned by New Zealand Media and Entertainment. It has the largest newspaper circulation of all newspapers in New Zealand, peaking at over 200,000 copies in 2006, although circulation of the daily Herald had declined to 144,157 copies on average by December 2014.[3] Its main circulation area is the Auckland region. It is also delivered to much of the north of the North Island including Northland, Waikato and King Country.[2][4]

The New Zealand Herald was founded by William Chisholm Wilson, and first published on 13 November 1863. Wilson had been a partner with John Williamson in the New Zealander, but left to start a rival daily newspaper as he saw a business opportunity with Auckland’s rapidly growing population.[5] He had also split with Williamson because Wilson supported the war against the Māori (which the Herald termed "the native rebellion") while Williamson opposed it.[6][7] The Herald also promoted a more constructive relationship between the North and South Islands.[6]

In 1876 the Wilson family and Horton joined in partnership and The New Zealand Herald absorbed The Daily Southern Cross.[9][10]

The Wilson and Horton families were both represented in the company, known as Wilson & Horton, until 1996 when Tony O'Reilly's Independent News & Media Group of Dublin purchased the Horton family's interest in the company. The Herald is now owned by New Zealand Media and Entertainment. That company is owned by Sydney-based APN News & Media and the Radio Network, owned by the Australian Radio Network.

In April 2007, APN NZ announced it was outsourcing the bulk of the Herald's copy editing to an Australian-owned company, Pagemasters.

In November 2012, two months after the launch of its new compact format, APN News and Media announced it would be restructuring its workforce, cutting eight senior roles from across the Herald's range of titles.[16]

The Herald is traditionally a centre-right newspaper, and was given the nickname "Granny Herald" into the 1990s. This changed with the acquisition of the paper by Independent News & Media in 1996, and today, despite remaining free enterprise oriented on economic matters such as trade and foreign investment, the Herald is generally editorially progressive on international geopolitics, diplomacy, and military matters, printing material from British newspapers such as The Independent and The Observer but more recently, conservative newspapers such as The Daily Telegraph. The Herald's stance on the Middle East is supportive of Israel, as seen most clearly in its 2003 censorship and dismissal of cartoonist Malcolm Evans following his submission of cartoons critical of Israel.[17]

On domestic matters, editorial opinion is centrist, usually supporting socially conservative values. In 2007, an editorial strongly disapproved of some legislation introduced by the Labour-led government, the Electoral Finance Act, to the point of overtly campaigning against the legislation.[18]

In July 2015, the New Zealand Press Council ruled that Herald columnist Rachel Glucina had failed to properly represent herself as a journalist when seeking comment from Amanda Bailey on a complaint she had made about Prime Minister John Key repeatedly tugging her ponytail when he was a customer at the cafe where she worked. The Herald published Bailey's name, photo, and comments after she had retracted permission for Glucina to do so. The council said there was an “element of subterfuge” in Glucina's actions and that there was not enough public interest to justify her behaviour. In its ruling the council said that, “The NZ Herald has fallen sadly short of those standards in this case.” The Herald's editor denied the accusations of subterfuge. Glucina subsequently resigned from the newspaper.[19]

In 1998 the Weekend Herald was set up as a separate title and the newspaper's website was launched.[20]

A compact-sized Sunday edition, the Herald on Sunday, was first published on 3 October 2004 under the editorship of Suzanne Chetwin and then, for five years, by Shayne Currie. It won Newspaper of the Year for the calendar years 2007 and 2009 and is New Zealand's second-highest-circulating weekly newspaper after the more established and conservative broadsheet, The Sunday Star-Times. In 2010, the Herald on Sunday started a campaign to reduce the legal blood alcohol limit for driving in New Zealand, called the "Two Drinks Max" campaign. The paper set up a campaign Facebook page, a Twitter account, and encouraged readers to sign up to the campaign on its own website.[21]

It is currently edited by Miriyana Alexander.

The newspaper's online news service,[22] originally called Herald Online, was established in 1998. It was redesigned in late 2006, and again in 2012.

The site was named best news website at the 2007 and 2008 Qantas Media Awards, won the "best re-designed website" category at the 2007 New Zealand NetGuide Awards, and was one of seven newspaper sites named an Official Honouree in the 2007 Webby Awards.[23]