For other uses, see Flamingo (disambiguation).

Flamingo comes from Portuguese or Spanish flamengo, "flame-colored", in turn coming from Provençal flamenc from flama "flame" and Germanic-like suffix -ing, with a possible influence of words like Fleming. A similar etymology has the Latinate Greek term Phoenicopterus (from Greek: φοινικόπτερος phoinikopteros), literally "blood red-feathered".[2]

Traditionally, the long-legged Ciconiiformes, probably a paraphyletic assemblage, have been considered the flamingos' closest relatives and the family was included in the order. Usually the ibises and spoonbills of the Threskiornithidae were considered their closest relatives within this order. Earlier genetic studies, such as those of Charles Sibley and colleagues, also supported this relationship.[3] Relationships to the waterfowl were considered as well,[4] especially as flamingos are parasitized by feather lice of the genus Anaticola, which are otherwise exclusively found on ducks and geese.[5] The peculiar presbyornithids were used to argue for a close relationship between flamingos, waterfowl, and waders.[6] A 2002 paper concluded they are waterfowl,[7] but a 2014 comprehensive study of bird orders found that flamingos and grebes are not waterfowl, but rather are part of Columbea along with doves, sandgrouse, and mesites.[8]

Living flamingoes based on the work by John Boyd.[9]

Six extant flamingo species are recognized by most sources, and were formerly placed in one genus, Phoenicopterus. As a result of a 2014 publication,[10] the family was reclassified into three genera.[11] 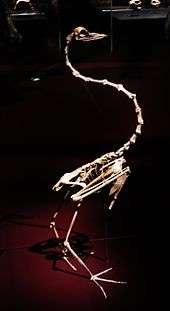 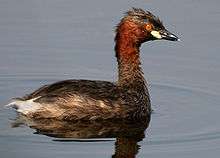 Recent molecular studies have suggested a relation with grebes,[12][13][14] while morphological evidence also strongly supports a relationship between flamingos and grebes. They hold at least eleven morphological traits in common, which are not found in other birds. Many of these characteristics have been previously identified on flamingos, but not on grebes.[15] The fossil palaelodids can be considered evolutionarily, and ecologically, intermediate between flamingos and grebes.[16]

For the grebe-flamingo clade, the taxon Mirandornithes ("miraculous birds" due to their extreme divergence and apomorphies) has been proposed. Alternatively, they could be placed in one order, with Phoenocopteriformes taking priority.[16]

Flamingos usually stand on one leg while the other is tucked beneath their body. The reason for this behaviour is not fully understood. Recent research indicates that standing on one leg may allow the birds to conserve more body heat, given that they spend a significant amount of time wading in cold water.[17] However, the behaviour also takes place in warm water. As well as standing in the water, flamingos may stamp their webbed feet in the mud to stir up food from the bottom.

Young flamingos hatch with greyish reddish plumage, but adults range from light pink to bright red due to aqueous bacteria and beta-Carotene obtained from their food supply. A well-fed, healthy flamingo is more vibrantly colored and thus a more desirable mate; a white or pale flamingo, however, is usually unhealthy or malnourished. Captive flamingos are a notable exception; many turn a pale pink as they are not fed carotene at levels comparable to the wild. 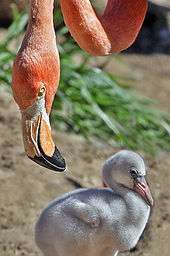 American flamingo and offspring. The arcuate is well adapted to bottom scooping

Flamingos filter-feed on brine shrimp and blue-green algae. Their beaks are specially adapted to separate mud and silt from the food they eat, and are uniquely used upside-down. The filtering of food items is assisted by hairy structures called lamellae which line the mandibles, and the large rough-surfaced tongue. The pink or reddish color of flamingos comes from carotenoids in their diet of animal and plant plankton. These carotenoids are broken down into pigments by liver enzymes.[18] The source of this varies by species, and affects the saturation of color. Flamingos whose sole diet is blue-green algae are darker in color compared to those who get it second hand (e.g. from animals that have digested blue-green algae).[19]

Colony of flamingos at Lake Nakuru

Flamingos are very social birds; they live in colonies whose population can number in the thousands. These large colonies are believed to serve three purposes for the flamingos: avoiding predators, maximizing food intake, and using scarce suitable nesting sites more efficiently.[20] Before breeding, flamingo colonies split into breeding groups of about 15 to 50 birds. Both males and females in these groups perform synchronized ritual displays.[21] The members of a group stand together and display to each other by stretching their necks upwards, then uttering calls while head-flagging, and then flapping their wings.[22] The displays do not seem to be directed towards an individual but instead occur randomly.[22] These displays stimulate "synchronous nesting" (see below) and help pair up those birds who do not already have mates.[21]

Flamingos form strong pair bonds although in larger colonies flamingos sometimes change mates, presumably because there are more mates to choose from.[23] Flamingo pairs establish and defend nesting territories. They locate a suitable spot on the mudflat to build a nest (the spot is usually chosen by the female).[22] It is during nest building that copulation usually occurs. Nest building is sometimes interrupted by another flamingo pair trying to commandeer the nesting site for their own use. Flamingos aggressively defend their nesting sites. Both the male and the female contribute to building the nest, and to defending the nest and egg. Occasional same-sex pairs have been reported.[24]

After the chicks hatch, the only parental expense is feeding.[25] Both the male and the female feed their chicks with a kind of crop milk, produced in glands lining the whole of the upper digestive tract (not just the crop). Production is stimulated by the hormone prolactin. The milk contains fat, protein, and red and white blood cells. (Pigeons and doves—Columbidae—also produce a crop milk (just in the glands lining the crop), which contains less fat and more protein than flamingo crop milk.)

For the first six days after the chicks hatch, the adults and chicks stay in the nesting sites. At around seven to twelve days old, the chicks begin to move out of their nests and explore their surroundings. When they are two weeks old, the chicks congregate in groups, called "microcrèches", and their parents leave them alone. After a while, the microcrèches merge into "crèches" containing thousands of chicks. Chicks that do not stay in their crèches are vulnerable to predators.[26] 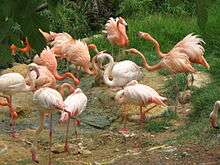 The first flamingo hatched in a European zoo was a Chilean flamingo at Zoo Basel in Switzerland in 1958. Since then, over 389 flamingos have grown up in Basel and been distributed to other zoos around the globe.[27]

An 83-year-old greater flamingo, believed to be the oldest in the world, died at the Adelaide Zoo in Australia in January, 2014.[28] 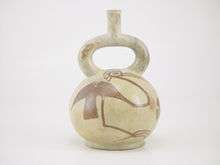