The Permian is a geologic period and system which spans 46.7 million years from the end of the Carboniferous Period 298.9 million years ago (Mya), to the beginning of the Triassic Period 252.2 Mya.[8] It is the last period of the Paleozoic Era; the following Triassic Period belongs to the Mesozoic Era. The concept of the Permian was introduced in 1841 by geologist Sir Roderick Murchison, who named it after the city of Perm.

The Permian witnessed the diversification of the early amniotes into the ancestral groups of the mammals, turtles, lepidosaurs and archosaurs. The world at the time was dominated by a single supercontinent known as Pangaea, surrounded by a global ocean called Panthalassa. The Carboniferous rainforest collapse left behind vast regions of desert within the continental interior.[9] Amniotes, who could better cope with these drier conditions, rose to dominance in place of their amphibian ancestors.

The Permian (along with the Paleozoic) ended with the Permian–Triassic extinction event, the largest mass extinction in Earth's history, in which nearly 90% of marine species and 70% of terrestrial species died out.[10] It would take well into the Triassic for life to recover from this catastrophe.[11] Recovery from the Permian-Triassic extinction event was protracted; on land, ecosystems took 30 million years to recover.[12]

The term "Permian" was introduced into geology in 1841 by Sir R. I. Murchison, president of the Geological Society of London, who identified typical strata in extensive Russian explorations undertaken with Edouard de Verneuil.[13][14] The region now lies in the Perm Krai of Russia.

Official ICS 2013 Subdivisions of the Permian System,[15] from most recent to most ancient rock layers are:

Sea levels in the Permian remained generally low, and near-shore environments were reduced as almost all major landmasses collected into a single continent – Pangaea. This could have in part caused the widespread extinctions of marine species at the end of the period by severely reducing shallow coastal areas preferred by many marine organisms. 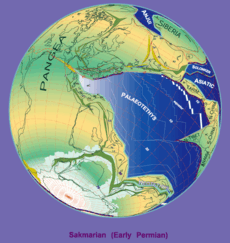 Geography of the Permian world

During the Permian, all the Earth's major landmasses were collected into a single supercontinent known as Pangaea. Pangaea straddled the equator and extended toward the poles, with a corresponding effect on ocean currents in the single great ocean ("Panthalassa", the "universal sea"), and the Paleo-Tethys Ocean, a large ocean that was between Asia and Gondwana. The Cimmeria continent rifted away from Gondwana and drifted north to Laurasia, causing the Paleo-Tethys ocean to shrink. A new ocean was growing on its southern end, the Tethys Ocean, an ocean that would dominate much of the Mesozoic Era. Large continental landmass interiors experience climates with extreme variations of heat and cold ("continental climate") and monsoon conditions with highly seasonal rainfall patterns. Deserts seem to have been widespread on Pangaea. Such dry conditions favored gymnosperms, plants with seeds enclosed in a protective cover, over plants such as ferns that disperse spores in a wetter environment. The first modern trees (conifers, ginkgos and cycads) appeared in the Permian.

Three general areas are especially noted for their extensive Permian deposits – the Ural Mountains (where Perm itself is located), China, and the southwest of North America, where the Permian Basin in the U.S. state of Texas is so named because it has one of the thickest deposits of Permian rocks in the world. 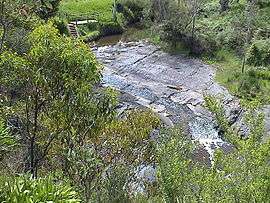 The climate in the Permian was quite varied. At the start of the Permian, the Earth was still in an Ice Age, which began in the Carboniferous. Glaciers receded around the mid-Permian period as the climate gradually warmed, drying the continent's interiors.[17] In the late Permian period, the drying continued although the temperature cycled between warm and cool cycles.[17]

Permian marine deposits are rich in fossil mollusks, echinoderms, and brachiopods.[18] Fossilized shells of two kinds of invertebrates are widely used to identify Permian strata and correlate them between sites: fusulinids, a kind of shelled amoeba-like protist that is one of the foraminiferans, and ammonoids, shelled cephalopods that are distant relatives of the modern nautilus. By the close of the Permian, trilobites and a host of other marine groups became extinct.

Terrestrial life in the Permian included diverse plants, fungi, arthropods, and various types of tetrapods. The period saw a massive desert covering the interior of Pangaea. The warm zone spread in the northern hemisphere, where extensive dry desert appeared.[18] The rocks formed at that time were stained red by iron oxides, the result of intense heating by the sun of a surface devoid of vegetation cover. A number of older types of plants and animals died out or became marginal elements.

The Permian began with the Carboniferous flora still flourishing. About the middle of the Permian a major transition in vegetation began. The swamp-loving lycopod trees of the Carboniferous, such as Lepidodendron and Sigillaria, were progressively replaced in the continental interior by the more advanced seed ferns and early conifers. At the close of the Permian, lycopod and equisete swamps reminiscent of Carboniferous flora survived only on a series of equatorial islands in the Paleotethys Sea that later would become South China.[19]

The Permian saw the radiation of many important conifer groups, including the ancestors of many present-day families. Rich forests were present in many areas, with a diverse mix of plant groups. The southern continent saw extensive seed fern forests of the Glossopteris flora. Oxygen levels were probably high there. The ginkgos and cycads also appeared during this period.

From the Pennsylvanian Subperiod of the Carboniferous period until well into the Permian, the most successful insects were primitive relatives of cockroaches. Six fast legs, four well-developed folding wings, fairly good eyes, long, well-developed antennae (olfactory), an omnivorous digestive system, a receptacle for storing sperm, a chitin-based exoskeleton that could support and protect, as well as a form of gizzard and efficient mouth parts, gave it formidable advantages over other herbivorous animals. About 90% of insects at the start of the Permian were cockroach-like insects ("Blattopterans").[20]

Primitive forms of dragonflies (Odonata) were the dominant aerial predators and probably dominated terrestrial insect predation as well. True Odonata appeared in the Permian,[21][22] and all are effectively semi-aquatic insects (aquatic immature stages, and terrestrial adults), as are all modern odonates. Their prototypes are the oldest winged fossils,[23] dating back to the Devonian, and are different in several respects from the wings of other insects.[24] Fossils suggest they may have possessed many modern attributes even by the late Carboniferous, and it is possible that they captured small vertebrates, for at least one species had a wing span of 71 centimetres (28 in).[25] Several other insect groups appeared during the Permian, including the Coleoptera (beetles) and Hemiptera (true bugs).

Early Permian terrestrial faunas were dominated by pelycosaurs, diadectes and amphibians,[26][27] the middle Permian by primitive therapsids such as the dinocephalia, and the late Permian by more advanced therapsids such as gorgonopsians and dicynodonts. Towards the very end of the Permian the first archosaurs appeared, a group that would give rise to the crurotarsans and the dinosaurs in the following period. Also appearing at the end of the Permian were the first cynodonts, which would go on to evolve into mammals during the Triassic. Another group of therapsids, the therocephalians (such as Lycosuchus), arose in the Middle Permian.[28][29] There were no aerial vertebrates (with the exception of gliding lizards, the avicephalans).

The Permian period saw the development of a fully terrestrial fauna and the appearance of the first large herbivores and carnivores. It was the high tide of the anapsids in the form of the massive Pareiasaurs and host of smaller, generally lizard-like groups. A group of small reptiles, the diapsids started to abound. These were the ancestors to most modern reptiles and the ruling dinosaurs as well as pterosaurs and crocodiles.

The synapsid, early ancestors to mammals, also thrived at this time. Synapsids included some large members such as Dimetrodon. The special adaptations of reptiles enabled them to flourish in the drier climate of the Permian and they grew to dominate the vertebrates.[26] 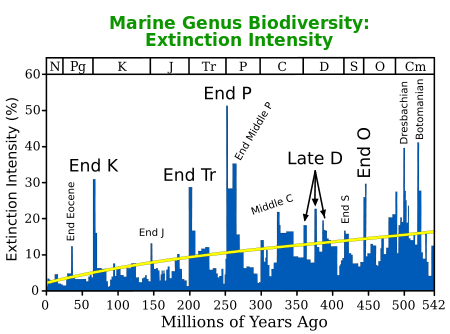 There is evidence that magma, in the form of flood basalt, poured onto the surface in what is now called the Siberian Traps, for thousands of years, contributing to the environmental stress that led to mass extinction. The reduced coastal habitat and highly increased aridity probably also contributed. Based on the amount of lava estimated to have been produced during this period, the worst-case scenario is the release of enough carbon dioxide from the eruptions to raise world temperatures five degrees Celsius.[17]

Another hypothesis builds on the flood basalt eruption theory. An increase in temperature of five degrees Celsius would not be enough to explain the death of 95% of life. But such warming could slowly raise ocean temperatures until frozen methane reservoirs below the ocean floor near coastlines melted, expelling enough methane (among the most potent greenhouse gases) into the atmosphere to raise world temperatures an additional five degrees Celsius. The frozen methane hypothesis helps explain the increase in carbon-12 levels found midway in the Permian–Triassic boundary layer. It also helps explain why the first phase of the layer's extinctions was land-based, the second was marine-based (and starting right after the increase in C-12 levels), and the third land-based again.[32]

An even more speculative hypothesis is that intense radiation from a nearby supernova was responsible for the extinctions.[33]

It has been hypothesised that huge meteorite impact crater (Wilkes Land crater) with a diameter of around 500 kilometers in Antarctica represents an impact event that may be related to the extinction.[34] The crater is located at a depth of 1.6 kilometers beneath the ice of Wilkes Land in eastern Antarctica. The scientists speculate that this impact may have caused the Permian–Triassic extinction event, although its age is bracketed only between 100 million and 500 million years ago. They also speculate that it may have contributed in some way to the separation of Australia from the Antarctic landmass, which were both part of a supercontinent called Gondwana. Levels of iridium and quartz fracturing in the Permian-Triassic layer do not approach those of the Cretaceous–Paleogene boundary layer. Given that a far greater proportion of species and individual organisms became extinct during the former, doubt is cast on the significance of a meteorite impact in creating the latter. Further doubt has been cast on this theory based on fossils in Greenland that show the extinction to have been gradual, lasting about eighty thousand years, with three distinct phases.[35]

Many scientists argue that the Permian-Triassic extinction event was caused by a combination of some or all of the hypotheses above and other factors; the formation of Pangaea decreased the number of coastal habitats and may have contributed to the extinction of many clades.