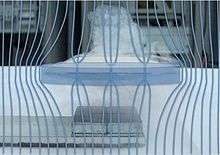 Flux pinning is desirable in high-temperature ceramic superconductors to prevent "flux creep", which can create a pseudo-resistance and depress both critical current density and critical field.

Flux pinning in the future

The worth of flux pinning is seen through many implementations such as lifts, frictionless joints, and transportation. The thinner the superconducting layer, the stronger the pinning that occurs when exposed to magnetic fields. Since the superconductor is pinned above the magnet away from any surfaces, there is the potential for a frictionless joint. Transportation is another area flux pinning technology could revolutionize and reform. MagSurf was developed by a French university utilizing flux pinning to create a hovercraft-like effect that could support a human, demonstrating the usefulness of the technology.[2][3]