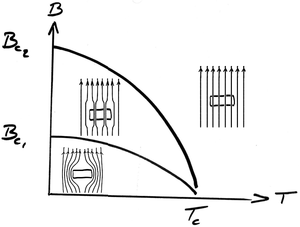 The B-T diagram of type-II superconductor.

Ginzburg–Landau theory defines two parameters: The superconducting coherence length and the London magnetic field penetration depth. In a type-II superconductor, the coherence length is smaller than the penetration depth. This leads to negative energy of the interface between superconducting and normal phases. The existence of the negative interface energy was known since the mid-1930s from the early works by the London brothers. A negative interface energy suggests that the system should be unstable against maximizing the number of such interfaces, which was not observed in first experiments on superconductors, before the experiments of Shubnikov in 1936 where two critical fields were found. As was later discussed by A. A. Abrikosov, these interfaces manifest as lines of magnetic flux passing through the material, turning a region of the superconductor normal. This normal region is separated from the rest of the superconductor by a circulating supercurrent. In analogy with fluid dynamics, the swirling supercurrent creates what is known as a vortex, or an Abrikosov vortex, after Alexei Alexeyevich Abrikosov. He found that the vortices arrange themselves into a regular array known as a vortex lattice.[5]

In the extreme type-II limit, the problem of type-II superconductor in magnetic field is exactly equivalent to that of vortex state in rotating superfluid helium, which was discussed earlier by Richard Feynman in 1955.

In the vortex state, a phenomenon known as flux pinning, where a superconductor is pinned in space above a magnet, becomes possible. This is not possible with type-I superconductors, since they cannot be penetrated by magnetic fields.[6] Since the superconductor is pinned above the magnet away from any surfaces, there is the potential for a frictionless joint. The worth of flux pinning is seen through many implementations such as lifts, frictionless joints, and transportation. The thinner the superconducting layer, the stronger the pinning that occurs when exposed to magnetic fields.

Other type-II examples are the cuprate-perovskite ceramic materials which have achieved the highest superconducting critical temperatures. These include La1.85Ba0.15CuO4, BSCCO, and YBCO (Yttrium-Barium-Copper-Oxide), which is famous as the first material to achieve superconductivity above the boiling point of liquid nitrogen (77 K). Due to strong vortex pinning, the cuprates are close to ideally hard superconductors.