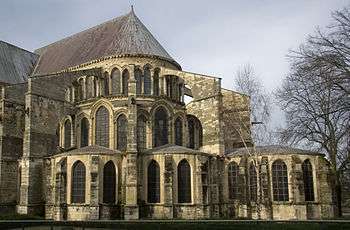 The flying buttress system of lateral-support, at the south-east end of the basilica of the Abbey of Saint-Remi, Reims. (ca. AD 1170)

The flying buttress (arc-boutant, arch buttress) is a specific form of buttress composed of an arched structure that extends from the upper portion of a wall to a pier of great mass, in order to convey to the ground the lateral forces that push a wall outwards, which are forces that arise from vaulted ceilings of stone and from wind-loading on roofs.[1]

The defining, functional characteristic of a flying buttress is that it is not in contact with the wall it supports, like a traditional buttress, and so transmits the lateral forces across the span of intervening space between the wall and the pier. To provide lateral support, flying-buttress systems are composed of two parts: (i) a massive pier, a vertical block of masonry situated away from the building wall, and (ii) an arch that bridges the span between the pier and the wall — either a segmental arch or a quadrant arch — the flyer of the flying buttress.[2] 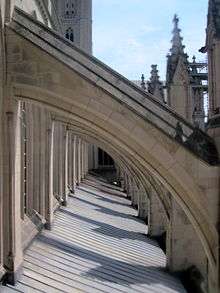 The flying buttresses of the Washington National Cathedral

As a lateral-support system, the flying buttress was developed during late antiquity and later flourished during the Gothic period (12th–16th c.) of architecture. Ancient examples of the flying buttress can be found on the Basilica of San Vitale in Ravenna and on the Rotunda of Galerius in Thessaloniki. The architectural-element precursors of the medieval flying buttress derive from Byzantine architecture and Romanesque architecture, in the design of churches, such as Durham Cathedral, where arches transmit the lateral thrust of the stone vault over the aisles; the arches were hidden under the gallery roof, and transmitted the lateral forces to the massive, outer walls. By the decade of 1160, architects in the Île-de-France region employed similar lateral-support systems that featured longer arches of finer design, which run from the outer surface of the clerestory wall, over the roof of the side aisles (hence are visible from the outside) to meet a heavy, vertical buttress rising above the top of the outer wall.[3]

The advantage of such lateral-support systems is that the outer walls do not have to be massive and heavy in order to resist the lateral-force thrusts of the vault. Instead, the wall surface could be reduced (allowing for larger windows, glazed with stained glass), because the vertical mass is concentrated onto external buttresses. The design of early flying buttresses tended to be heavier than required for the static loads to be borne, e.g. the Chartres Cathedral (ca. 1210), and around the apse of the Saint Remi Basilica, which is an extant, early example in its original form (ca. 1170).[4] Later architects progressively refined the design of the flying buttress, and narrowed the flyers, some of which were constructed with one thickness of voussoi (wedge brick) with a capping stone atop, e.g. the Amiens Cathedral, the Le Mans Cathedral, and the Beauvais Cathedral.

The architectural design of Late Gothic buildings featured flying buttresses, some of which featured flyers decorated with crockets (hooked decorations) and sculpted figures set in aedicules (niches) recessed into the buttresses. In the event, the architecture of the Renaissance eschewed the lateral support of the flying buttress in favour of thick-wall construction. Despite its disuse for function and style in construction and architecture, in the early 20th century, the flying-buttress design was revived by Canadian engineer William P. Anderson to build lighthouses.[5] 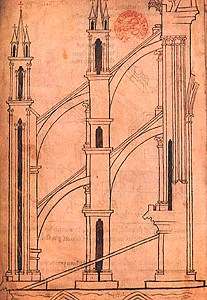 Architectural drawing of the type of flying buttress, by Villard de Honnecourt, used in the cathedral at Notre-Dame de Reims

Given that most of the weight-load is transmitted from the ceiling through the upper part of the walls, the flying buttress is a two-part composite support that features a semi-arch that extends to a massive pier far from the wall, and so provides most of the load-bearing capacity of a traditional buttress, which is engaged with the wall from top to bottom; thus, the flying buttress is a lighter and more cost-effective architectural structure.

To build the flying buttress, it was first necessary to construct temporary wooden frames, which are called centring. The centering would support the weight of the stones and help maintain the shape of the arch until the mortar was cured. The centering was first built on the ground, by the carpenters. Once that was done, they would be hoisted into place and fastened to the piers at the end of one buttress and at the other. These acted as temporary flying buttresses until the actual, stone arch was complete.[6] 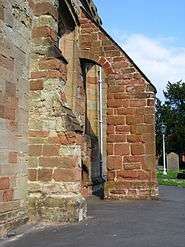 Moreover, because the flying buttress relieves the load-bearing walls of excess weight and thickness, by way of a smaller area of contact, the wall has a greater surface area in which to install windows, as in the design of a religious buildings, e.g. church, basilica, and cathedral. In the design of Gothic churches, two arched flyers were applied, one above the other, in which the lower flyer (positioned below the springing point of the vault) resists the lateral-thrust forces of the vault, whilst the upper flyer resists the forces of wind-loading on the roof.[7] The vertical buttresses (piers) at the outer end of the flyers usually were capped with a pinnacle (either a cone or a pyramid) usually ornamented with crockets, to provide additional vertical-load support with which to resist the lateral thrust conveyed by the flyer.[8]

Another application of the flying-buttress support system is the reinforcement of a leaning wall in danger of collapsing, especially a load-bearing wall; for example, at village of Chaddesley Corbett, the practical application of a flying buttress to a buckled wall is more practical than dismantling and rebuilding the wall.