For other uses, see Beauvais (disambiguation).

Beauvais (French pronunciation: ​[bovɛ]) archaic English: Beawayes, Beeway, Boway, is a city and commune in northern France. It serves as the capital of the Oise département, in the Hauts-de-France region. Beauvais is located approximately 75 kilometres (47 miles) from Paris. The residents of the city are called Beauvaisiens.

Beauvais was known to the Romans by the Gallo-Roman name of Caesaromagus (magos is Common Celtic for "field"). The post-Renaissance Latin rendering is Bellovacum from the Belgic tribe the Bellovaci, whose capital it was. In the ninth century it became a countship, which about 1013 passed to the bishops of Beauvais, who became peers of France from the twelfth century.[1] At the coronations of kings the Bishop of Beauvais wore the royal mantle and went, with the Bishop of Langres, to raise the king from his throne to present him to the people.

De Bello Gallico II 13 reports that as Julius Caesar was approaching a fortified town called Bratuspantium in the land of the Bellovaci, its inhabitants surrendered to him when he was about 5 Roman miles away. Its name is Gaulish for "place where judgements are made", from *bratu-spantion. Some say that Bratuspantium is Beauvais. Others theorize that it is Vendeuil-Caply or Bailleul sur Thérain.[2][3]

In a charter dated 1056/1060, Eudo of Brittany granted land "in pago Belvacensi" (Beauvais, Picardy) to the Abbey of Angers Saint-Aubin (see Albinus of Angers).[lower-alpha 1]

In 1346 the town had to defend itself against the English, who again besieged it in 1433. The siege which it endured in 1472 at the hands of the Duke of Burgundy, was rendered famous by the heroism of the town's women, under the leadership of Jeanne Hachette, whose memory is still celebrated by a procession on 27 June (the feast of Sainte Angadrême), during which women take precedence over men.[1]

An interesting hoard of coins from the High Middle Ages became known as the Beauvais Hoard, because some of the British and European coins found with the lot were from the French abbey located in Beauvais. The hoard, which contained a variety of rare and extremely rare Anglo-Norman pennies, English and foreign coins, was reputed to have been found in or near Paris.[4][5]

Beauvais was extensively damaged during World War I and again in World War II, during the German advance on Paris in June 1940. Much of the older part of the city was all but destroyed, and the cathedral badly damaged before being liberated by British forces on 30 August 1944.[6]

Beauvais lies at the foot of wooded hills on the left bank of the Thérain at its confluence with the Avelon. Its ancient ramparts have been destroyed, and it is now surrounded by boulevards, outside of which run branches of the Thérain. In addition, there are spacious promenades in the north-east of the town.[1]

Beauvais experiences a oceanic climate (Köppen climate classification Cfb). The average annual temperature is 9.9°C (1961–1990), the sunlight annual average of 1669 hours (1991–2010). Hills Bray are provided to the precipitation of Beauvais. The precipitation is 669 mm on average per year (1981–2010), while it is 800 mm on average per year in Bray. However, the frequency of rainfall is high. The average number of days per year above the precipitation of a 1 mm is 116 days, or every third day. The fog is often present, it is estimated at about 55 days a year. The department is affected by 41 days of average wind year, usually it comes from the west to the south. 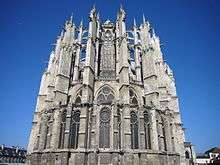 The city's cathedral, dedicated to Saint Peter (Cathédrale Saint-Pierre de Beauvais), in some respects the most daring achievement of Gothic architecture, consists only of a transept and quire with apse and seven apse-chapels. The vaulting in the interior exceeds 46 m or 150 feet in height.[1] The cathedral underwent a major repair and restoration process in 2008.

The small Romanesque church of the 10th century known as the Basse Oeuvre occupies the site destined for the nave; much of its east end was demolished to make room for the new cathedral.

Begun in 1247, under Bishop William of Grès (Guillaume de Grès, Guillaume de Grez), an extra 5 metres (16 feet) were added to the height, to make it the tallest cathedral in Europe: the work was interrupted in 1284 by the collapse of the vaulting of the choir, a disaster that produced a temporary failure of nerve among the masons working in Gothic style. The transept was built from 1500 to 1548. In 1573 the fall of a too-ambitious central tower stopped work again, after which little addition was made.[1]

Its façades, especially that on the south, exhibit all the richness of the late Gothic style. The carved wooden doors of both the north and the south portals are masterpieces respectively of Gothic and Renaissance workmanship. The church possesses an elaborate astronomical clock (1866) and tapestries of the fifteenth and seventeenth centuries; but its chief artistic treasures are stained glass windows of the thirteenth, fourteenth and sixteenth centuries, the most beautiful of them from the hand of the Renaissance artist, Engrand Le Prince, a native of Beauvais. To him also is due some of the stained glass in St. Etienne, the second church of the town, and an interesting example of the transition stage between the Romanesque and Gothic styles.[1]

During the Middle Ages, on 14 January, the Feast of Asses was celebrated in the Beauvais Cathedral, in commemoration of the Flight into Egypt. 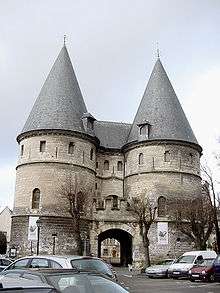 In the Place de l'Hôtel de Ville and in the old streets near the cathedral there are several houses dating from the 12th to the 16th centuries. The Hôtel de ville, close to which stands the statue of Jeanne Hachette, was built in 1752.

The episcopal palace, now housing the Musée départemental de l'Oise, was built in the 16th century, partly upon the Gallo-Roman fortifications.[1] The church of Saint-Étienne is a Romanesque-Gothic building (early 12th-late 16th centuries), including, in one of its transept's portals, a sculpture of "Wheel of Life"

Beauvais-Tillé Airport, dating from the 1930s, lies in north of the city, in Tillé. It is used as a gateway to Paris by several low-cost carriers. Traffic growth is significant: in 1997, 200,000 passengers used it annually, but by 2006, it was more than 1.8 million. Airport usage increased by 40% a year on average between 2001 and 2005. The airport is mainly used for passenger traffic (only 2 to 3 flights involve freight each month) and serves 48 destinations.

Public transport in Beauvais is provided by Corolis (formerly The Urban Transport network of Beauvaisis French: Transports Urbains du Beauvaisis or TUB). The transit bus (commuter bus) network consists of 25 regular lines which serve Beauvais and its suburbs, including:

In an effort to promote cleaner urban transportation and protect the environment, the city began to develop a "Green Plan" (Plan vert). Ultimately, the goal is to have a network of 20 km (12 mi) bicycle paths.

The industry of Beauvais comprises, besides the state manufacture of tapestry, which dates from 1664, the manufacture of various kinds of cotton and woollen goods, brushes, toys, boots and shoes, and bricks and tiles. Market-gardening flourishes in the vicinity and an extensive trade is carried on in grain and wine.

The town is the seat of a bishop, a prefect and a Court of Assizes; it has Tribunals of First Instance and of commerce, together with a Chamber of Commerce, a branch of the Bank of France, a higher ecclesiastical seminary, a lycée and training colleges.[1]

Amongst the major companies operating in the town are Nestle and Agco (Massey Ferguson). Also present since 1986 is RS Components, founded by Jerry Vaughan, and now operating from a purpose built distribution centre to the east of the town

Beauvais also has a small airport, Beauvais Tillé, which is used by several low-cost carrier and charter airlines such as Ryanair as a terminal for nearby Paris, to which frequent shuttle buses run.

Beauvais has the following schools:

Beauvais is home to AS Beauvais Oise, a football club playing in the Championnat National (as of 2006), which is supported by a fine percussion band.

Beauvais is twinned with:

There are also partnerships with: