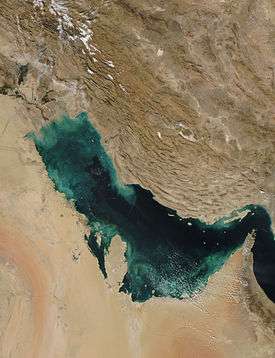 Foreland basins can be divided into two categories:

The wedge-top sits on top of the moving thrust sheets and contains all the sediments charging from the active tectonic thrust wedge. This is where piggyback basins form.

The foredeep is the thickest sedimentary zone and thickens toward the orogen. Sediments are deposited via distal fluvial, lacustrine, deltaic, and marine depositional systems.

The forebulge and backbulge are the thinnest and most distal zones and are not always present. When present, they are defined by regional unconformities as well as aeolian and shallow-marine deposits.

Sedimentation is most rapid near the moving thrust sheet. Sediment transport within the foredeep is generally parallel to the strike of the thrust fault and basin axis.

The motion of the adjacent plates of the foreland basin can be determined by studying the active deformation zone with which it is connected. Today GPS measurements provide the rate at which one plate is moving relative to another. It is also important to consider that present day kinematics are unlikely to be the same as when deformation began. Thus, it is crucial to consider non-GPS models to determine the long-term evolution of continental collisions and in how it helped develop the adjacent foreland basins.

Comparing both modern GPS (Sella et al. 2002) and non-GPS models allows deformation rates to be calculated. Comparing these numbers to the geologic regime helps constrain the number of probable models as well as which model is more geologically accurate within a specific region.

Seismicity determines where active zones of seismic activity occur as well as measure the total fault displacements and the timing of the onset of deformation (Allen et al. 2004). 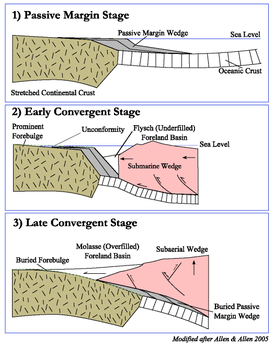 Foreland basins form because as the mountain belt grows, it exerts a significant mass on the Earth’s crust, which causes it to bend, or flex, downwards. This occurs so that the weight of the mountain belt can be compensated by isostasy at the upflex of the forebulge.

The temperature underneath the orogen is much higher and weakens the lithosphere. Thus, the thrust belt is mobile and the foreland basin system becomes deformed over time. Syntectonic unconformities demonstrate simultaneous subsidence and tectonic activity.

Foreland basins are filled with sediments which erode from the adjacent mountain belt. In the early stages, the foreland basin is said to be underfilled. During this stage, deep water and commonly marine sediments, known as flysch, are deposited. Eventually, the basin becomes completely filled. At this point, the basin enters the overfilled stage and deposition of terrestrial clastic sediments occurs. These are known as molasse. Sediment fill within the foredeep acts as an additional load on the continental lithosphere. 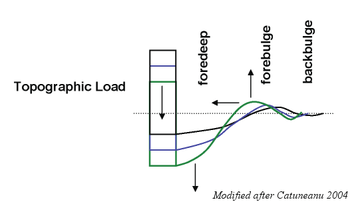 Although the degree to which the lithosphere relaxes over time is still controversial, most workers (Allen & Allen 2005, Flemings & Jordan 1989) accept an elastic or visco-elastic rheology to describe the lithospheric deformation of the foreland basin. Allen & Allen (2005) describe a moving load system, one in which the deflection moves as a wave through the foreland plate before the load system. The deflection shape is commonly described as an asymmetrical low close to the load along the foreland and a broader uplifted deflection along the forebulge. The transport rate or flux of erosion, as well as sedimentation, is a function of topographic relief.

Foreland basins are considered to be hypothermal basins (cooler than normal), with low geothermal gradient and heat flow. Heat flow values average between 1 and 2 HFU (40-90 mWm−2 (Allen & Allen 2005). Rapid subsidence may be responsible for these low values.

Over time sedimentary layers become buried and lose porosity. This can be due to sediment compaction or the physical or chemical changes, such as pressure or cementation. Thermal maturation of sediments is a factor of temperature and time and occurs at shallower depths due to past heat redistribution of migrating brines.

Vitrinite reflectance, which typically demonstrates an exponential evolution of organic matter as a function of time, is the best organic indicator for thermal maturation. Studies have shown that present day thermal measurements of heat flow and geothermal gradients closely correspond to a regime’s tectonic origin and development as well as the lithospheric mechanics (Allen & Allen 2005).

Fluids carrying heat, minerals, and petroleum, have a vast impact on the tectonic regime within the foreland basin. Before deformation, sediment layers are porous and full of fluids, such as water and hydrated minerals. Once these sediments are buried and compacted, the pores become smaller and some of the fluids, about 1/3, leave the pores. This fluid has to go somewhere. Within the foreland basin, these fluids potentially can heat and mineralize materials, as well as mix with the local hydrostatic head.

Other minor constraints include tectonic compression, thrusting, and sediment compaction. These are considered minor because they are limited by the slow rates of tectonic deformation, lithology and depositional rates, on the order of 0–10 cm yr−1, but more likely closer to 1 or less than 1 cm yr−1. Overpressured zones might allow for faster migration, when 1 kilometer or more of shaly sediments accumulate per 1 million years (Bethke & Marshak 1990).

Bethke & Marshak (1990) state that “groundwater that recharges at high elevation migrates through the subsurface in response to its high potential energy toward areas where the water table is lower.”

Bethke & Marshak (1990) explain that petroleum migrates not only in response to the hydrodynamic forces that drive groundwater flow, but to the buoyancy and capillary effects of the petroleum moving through microscopic pores. Migration patterns flow away from the orogenic belt and into the cratonic interior. Frequently, natural gas is found closer to the orogen and oil is found further away (Oliver 1986).