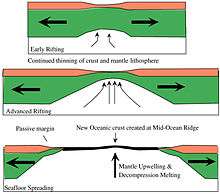 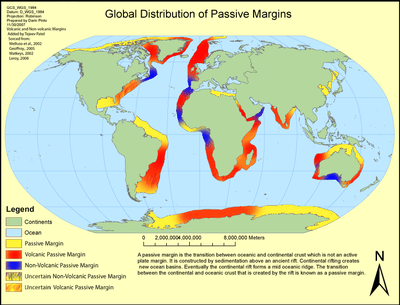 Passive margins are found at every ocean and continent boundary that is not marked by a strike-slip fault or a subduction zone. Passive margins define the region around the Atlantic Ocean, Arctic Ocean, and western Indian Ocean, and define the entire coasts of Africa, Greenland, India and Australia. They are also found on the east coast of North America and South America, in western Europe and most of Antarctica. East Asia also contains some passive margins.

This refers to whether a crustal boundary between oceanic lithosphere and continental lithosphere is a plate boundary or not. Active margins are found on the edge of a continent where subduction occurs. These are often marked by uplift and volcanic mountain belts on the continental plate. Less often there is a strike-slip fault, as defines the southern coastline of W. Africa. Most of the eastern Indian Ocean and nearly all of the Pacific Ocean margin are examples of active margins. While a weld between oceanic and continental lithosphere is called a passive margin, it is not an inactive margin. Active subsidence, sedimentation, growth faulting, pore fluid formation and migration are all active processes on passive margins. Passive margins are only passive in that they are not active plate boundaries. 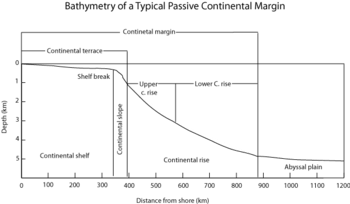 Bathymetric profile across a typical passive margin. Note that vertical scale is greatly exaggerated relative to the horizontal scale.

At high latitudes and during glaciations, the nearshore morphology of passive margins may reflect glacial processes, such as the fjords of Norway and Greenland.

Passive margins are characterized by thick accumulations of sediments. Space for these sediments is called accommodation and is due to subsidence of especially the transitional crust. Subsidence is ultimately caused by gravitational equilibrium that is established between the crustal tracts, known as isostasy. Isostasy controls the uplift of the rift flank and the subsequent subsidence of the evolving passive margin and is mostly reflected by changes in heat flow. Heat flow at passive margins changes significantly over its lifespan, high at the beginning and decreasing with age. In the initial stage, the continental crust and lithosphere is stretched and thinned due to plate movement (plate tectonics) and associated igneous activity. The very thin lithosphere beneath the rift allows the upwelling mantle to melt by decompression. Lithospheric thinning also allows the asthenosphere to rise closer to the surface, heating the overlying lithosphere by conduction and advection of heat by intrusive dykes. Heating reduces the density of the lithosphere and elevates the lower crust and lithosphere. In addition, mantle plumes may heat the lithosphere and cause prodigious igneous activity. Once a mid-oceanic ridge forms and seafoor spreading begins, the original site of rifting is separated into conjugate passive margins (for example, the eastern US and NW African margins were parts of the same rift in early Mesozoic time and are now conjugate margins) and migrates away from the zone of mantle upwelling and heating and cooling begins. The mantle lithosphere below the thinned and faulted continental oceanic transition cools, thickens, increases in density and thus begins to subside. The accumulation of sediments above the subsiding transitional crust and lithosphere further depresses the transitional crust.

There are four different perspectives needed to classify passive margins:

The first describes the relationship between rift orientation and plate motion, the second describes the nature of transitional crust, and the third describes post-rift sedimentation. All three perspectives need to be considered in describing a passive margin. In fact, passive margins are extremely long, and vary along their length in rift geometry, nature of transitional crust, and sediment supply; it is more appropriate to subdivide individual passive margins into segments on this basis and apply the threefold classification to each segment.

This is the typical way that passive margins form, as separated continental tracts move perpendicular to the coastline. This is how the Central Atlantic opened, beginning in Jurassic time. Faulting tends to be listric: normal faults that flatten with depth.

Sheared margins form where continental breakup was associated with strike-slip faulting. A good example of this type of margin is found on the south-facing coast of west Africa. Sheared margins are highly complex and tend to be rather narrow. They also differ from rifted passive margins in structural style and thermal evolution during continental breakup. As the seafloor spreading axis moves along the margin, thermal uplift produces a ridge. This ridge traps sediments, thus allowing for thick sequences to accumulate. These types of passive margins are less volcanic.

This type of passive margin develops where rifting is oblique to the coastline, as is now occurring in the Gulf of California.

Transitional crust, separating true oceanic and continental crusts, is the foundation of any passive margin. This forms during the rifting stage and consists of two endmembers: Volcanic and Non-Volcanic. This classification scheme only applies to rifted and transtensional margin; transitional crust of sheared margins is very poorly known.

Volcanic margins form part of large igneous provinces, which are characterised by massive emplacements of mafic extrusives and intrusive rocks over very short time periods. Volcanic margins form when rifting is accompanied by significant mantle melting, with volcanism occurring before and/or during continental breakup. The transitional crust of volcanic margins is composed of basaltic igneous rocks, including lava flows, sills, dykes, and gabbro.

Volcanic margins are usually distinguished from non-volcanic (or magma-poor) margins (e.g. the Iberian margin, Newfoundland margin) which do not contain large amounts of extrusive and/or intrusive rocks and may exhibit crustal features such as unroofed, serpentinized mantle . Volcanic margins are known to differ from magma-poor margins in a number of ways:

The high velocities (Vp > 7 km) and large thicknesses of the LCBs are evidence that supports the case for plume-fed accretion (mafic thickening) underplating the crust during continental breakup. LCBs are located along the continent-ocean transition but can sometimes extend beneath the continental part of the rifted margin (as observed in the mid-Norwegian margin for example). In the continental domain, there are still open discussion on their real nature, chronology, geodynamic and petroleum implications.[1]

Passive margins of this type show a simple progression through the transitional crust, from normal continental to normal oceanic crusts. The passive margin offshore Texas is a good example.

This type of transitional crust is characterized by abandoned rifts and continental blocks, such as the Blake Plateau, Grand Banks, or Bahama Islands offshore eastern Florida.

Constructional margins are the "classic" mode of passive margin sedimentation. Normal sedimentation results from the transport and deposition of sand, silt, and clay by rivers via deltas and redistribution of these sediments by longshore currents. The nature of sediments can change remarkably along a passive margin, due to interactions between carbonate sediment production, clastic input from rivers, and alongshore transport. Where clastic sediment inputs are small, biogenic sedimentation can dominate especially nearshore sedimentation. The Gulf of Mexico passive margin along the southern United States is an excellent example of this, with muddy and sandy coastal environments down current (west) from the Mississippi River Delta and beaches of carbonate sand to the east. The thick layers of sediment gradually thin with increasing distance offshore, depending on subsidence of the passive margin and the efficacy of offshore transport mechanisms such as turbidity currents and submarine channels.

Development of the shelf edge and its migration through time is critical to the development of a passive margin. The location of the shelf edge break reflects complex interaction between sedimentation, sealevel, and the presence of sediment dams. Coral reefs serve as bulwarks that allow sediment to accumulate between them and the shore, cutting off sediment supply to deeper water. Another type of sediment dam results from the presence of salt domes, as are common along the Texas and Louisiana passive margin. 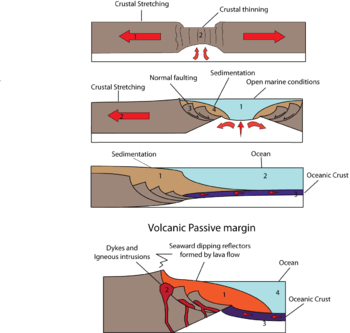 There are three main stages in the formation of passive margins:

Passive margins are petroleum storehouses because these are associated with favorable conditions for accumulation and maturation of organic matter. Early continental rifting conditions led to the development of anoxic basins, large sediment and organic flux, and the preservation of organic matter that led to oil and gas deposits. Crude oil will form from these deposits. These are the localities in which petroleum resources are most profitable and productive. Productive fields are found in passive margins around the globe, including the Gulf of Mexico, western Scandinavia, and Western Australia.

Law of the Sea

International discussions about who controls the resources of passive margins are the focus of Law of the Sea negotiations. Continental shelves are important parts of national exclusive economic zones, important for seafloor mineral deposits (including oil and gas) and fisheries.