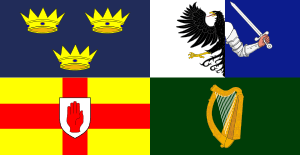 One version of the Four Provinces Flag of Ireland. Clockwise from top right, its quarters are the flags of Connacht, Leinster, Ulster, and Munster. The placement of the provinces varies from flag to flag.

The four traditional provinces of Ireland (Munster, Leinster, Connacht and Ulster) are popularly displayed quartered as the arms of Ireland. The Four Provinces Flag and variants of it are used by various all-Ireland sports teams and cultural organisations. The order in which the flags appear varies.[1]

The Flag of Leinster (Vert, a Harp Or, stringed Argent) is believed to have likely evolved from the arms of Ireland itself with a change of tincture.

Similarly, the Flag of Munster (dark blue, three antique crowns Or) is thought to have been derived from those of the former Lordship of Ireland, or from the short-lived dukedom of Ireland created for Robert de Vere in 1386. The crowns are now usually depicted as "antique" or "eastern": a gold rim with eight sharp, triangular rays, of which five are seen.[2][3]

The Flag of Ulster is the arms of the de Burgh, Earls of Ulster, combined with the red hand seal of the O'Neills. These two dynasties and symbols are inseparably linked to Ulster. The combination of them is blazoned Or, on a Cross Gules, an inescutcheon Argent, charged with a dexter hand erect aupaumee and couped at the wrist Gules.[4]

Finally, the Flag of Connacht is blazoned Party Per Pale Argent and Azure, in the first an eagle dimidiated and displayed Sable in the second issuant from the partition an arm embowed and vested, the hand holding a sword erect, all Argent. These are believed to have been adopted from the arms of the medieval Schottenklöster (Gaelic monastery) in Regensburg, Germany. The arms of the Regensburg Schottenklöster, which date from at least the 14th century, combined the arms of the Holy Roman Emperor (from whom the abbey received protection) dimidiated with a symbol that may be linked with the crest of the O'Brien dynasty arms (an 11th-century O'Brien is listed as the "fundator" of the abbey). The arms may have been granted to Ruaidrí Ua Conchobair, King of Connacht and the last High King of Ireland before the Norman invasion, by the abbey as a gift to return his patronage. The arms were given as the "old tyme arms" of Ireland by the Athlone Pursuivant, Edward Fletcher, c. 1575 and, with slight change of tinctures, became the arms of Connacht in the seventeenth century.[4]

The Flag and its variations is currently used by many organizations in Ireland especially those that operate in an all Ireland context for example the Ireland rugby team, Ireland hockey team and the Irish Amateur Boxing Association.