Framlingham College is an independent, coeducational boarding and day school in the town of Framlingham, near Woodbridge, Suffolk, England. Together with its preparatory school and nursery at Brandeston Hall, it serves pupils from 2 to 18 years of age. 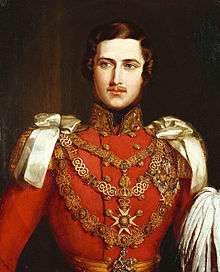 Framlingham College was originally called the Albert Memorial College in memory of Prince Albert and was founded in 1864 by public subscription as the Suffolk County Memorial to Queen Victoria's husband, Albert, Prince Consort, and was incorporated by Royal Charter. The individuals most involved in setting up of the school were Sir Edward Kerrison, 2nd Baronet, Richard Garrett and the Earl of Stradbroke. The land on which the college was built was originally part of the Castle estate, left by Sir Thomas Hitcham in 1636 to Pembroke Hall, Cambridge (Pembroke College, Cambridge). The architect was Fredrick Peck of Furnival's Inn, London. Built to accommodate 300 boys, the College opened its doors to pupils on 10 April 1865.

In J.R.De S. Honey's book, Tom Brown's Universe: Public School in the Nineteenth Century, Honey reviewed the 64 leading public schools of the time. He classified Framlingham as being in 'Group 4' of these schools considering Framlingham to be a school that interacts less than it should with other leading schools.

During 1940, because of Framlingham's position close to the Suffolk coast (a likely site for a possible German invasion), and as a result of the crisis unfolding at Dunkirk, pupils from the college were evacuated for a short time to Repton School in Derbyshire.

The College's prep school at Brandeston Hall, was opened by Princess Alice, Countess of Athlone, in July 1949. The Hall had been purchased and restored by The Society of Old Framlinghamians as a memorial to those of their number who 'in two Great Wars gave their lives for the freedom of the world'.

Post war austerity continued at Framlingham until the reforming Headmaster L. I. Rimmer was appointed in 1971. Rimmer began the process of turning the college into the modern school that now exists. A major building programme began and continues to this day. The admission of girls began at both the College and its prep school in September 1976 and pupils numbers began to climb to the levels that they are today.[2] 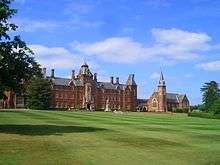 Paul Taylor became Headmaster in September 2009; he was formerly Lower Master (Deputy Head) at the King’s School in Canterbury. The school received an excellent ISI Inspection Report in February 2015 and an Outstanding Ofsted report in February 2011.[3]

Pupils are accommodated in seven boarding and day houses: three for girls and four for boys. The facilities at Framlingham College include a theatre with tiered seating for 250, a design and technology centre, a music department including various studios and recording facilities, a library, a Sixth form centre which opened in 2014, a leisure centre that houses an indoor swimming pool, a fitness suite and weights room. The original library, which was given to the college by Charles H. Berners, Esq. DL in 1899, was extended in 1998.

The school has two campuses situated on approximately 135 acres. The College campus sits in an elevated position and looks directly across to the 12th century Framlingham Castle beyond. Between the College and the Castle lies the 34 acre Framlingham Mere, owned by the College and managed by Suffolk Wildlife Trust. The Mere is a nature reserve. The prep school campus at Brandeston Hall is a mock tudorbethan hall set in its own grounds and faces the medieval All Saints church of Brandeston.

The most recent ISI inspection (2015) adjudged the teaching and learning at the College as 'Excellent'. 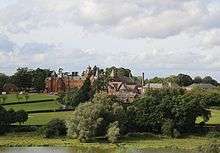 view of the school from the nearby Framlingham Castle

A number of books have been written about the College, they include:

Framlingham college in the Media

Framlingham College was the subject of a channel 4 documentary called Classmates in 2003.[4] The buildings and interiors of Framlingham College are used in series 2 of the BBC comedy Detectorists, first broadcast in November 2015.[5]

Three Old Framlinghamians have won the Victoria Cross,[9] and one the George Cross (converted from the Albert Medal).

Recipients of the Victoria Cross

Recipients of the George Cross