As of 2014 the college has a financial endowment of £67 million.[1] Pembroke has a level of academic performance among the highest of all the Cambridge colleges; in 2013, 2014 and 2016 Pembroke was placed second in the Tompkins Table.

Pembroke is home to the first chapel designed by Sir Christopher Wren and is one of the six Cambridge colleges to have educated a British prime minister, in Pembroke's case William Pitt the Younger. The college library, with a Victorian neo-gothic clock tower, is endowed with an original copy of the first encyclopaedia to contain printed diagrams.

Marie de St Pol, Countess of Pembroke (1303-1377) founded Pembroke College, Cambridge. Christmas Eve 1347, Edward III granted Marie de St Pol, widow of the Earl of Pembroke, the licence for the foundation of a new educational establishment in the young university at Cambridge. The Hall of Valence Mary ("Custos & Scolares Aule Valence Marie in Cantebrigg'"), as it was originally known, was thus founded to house a body of students and fellows.[2] The statutes were notable in that they both gave preference to students born in France who had already studied elsewhere in England, and that they required students to report fellow students if they indulged in excessive drinking or visited disreputable houses.

The college was later renamed Pembroke Hall, and finally became Pembroke College in 1856.

Marie was closely involved with College affairs in the thirty years up to her death in 1377. She seems to have been something of a disciplinarian: the original Foundation documents had strict penalties for drunkenness and lechery, required that all students’ debts were settled within two weeks of the end of term, and gave strict limits on numbers at graduation parties.

In 2015, the college received a bequest of £34 million from the estate of American inventor and Pembroke alumnus Ray Dolby, thought to be the largest single donation to a college in the history of Cambridge University.[3] 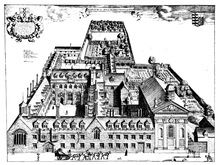 The Gatehouse is the oldest in Cambridge, dating from the 14th century

The first buildings comprised a single court (now called Old Court) containing all the component parts of a college – chapel, hall, kitchen and buttery, master's lodgings, students' rooms – and the statutes provided for a manciple, a cook, a barber and a laundress. Both the founding of the college and the building of the city's first college Chapel (1355) required the grant of a papal bull.

The original court was the university's smallest at only 95 feet (29 m) by 55 feet (17 m), but was enlarged to its current size in the nineteenth century by demolishing the south range.

The college's gatehouse is the oldest in Cambridge. 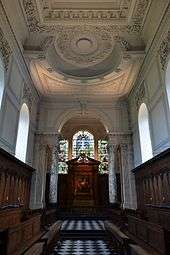 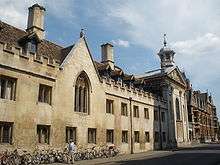 The Trumpington Street Façade with the College Chapel on the right, the first building to be built by Sir Christopher Wren 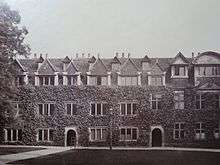 The original Chapel now forms the Old Library and has a striking seventeenth-century plaster ceiling, designed by Henry Doogood, showing birds flying overhead. Around the Civil War, one of Pembroke's fellows and Chaplain to the future Charles I, Matthew Wren, was imprisoned by Oliver Cromwell. On his release after eighteen years, he fulfilled a promise by hiring his nephew Christopher Wren to build a great Chapel in his former college. The resulting Chapel was consecrated on St Matthew's Day, 1665, and the eastern end was extended by George Gilbert Scott in 1880, when it was consecrated on the Feast of the Annunciation. 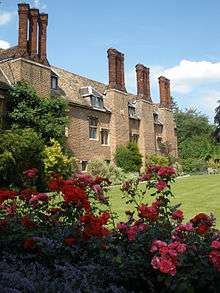 The College gardens in Library Court

An increase in membership over the last 150 years saw a corresponding increase in building activity. The Hall was rebuilt in 1875–6 by Alfred Waterhouse after he had declared the medieval Hall unsafe. As well as the Hall, Waterhouse built a new range of rooms, Red Buildings (1871–72), in French Renaissance style, designed a new Master's Lodge on the site of Paschal Yard (1873, later to become N staircase), pulled down the old Lodge and the south range of Old Court to open a vista to the Chapel, and finally built a new Library (1877–78) in the continental Gothic style.

Waterhouse was dismissed as architect in 1878 and succeeded by George Gilbert Scott, who, after extending the Chapel, provided additional accommodation with the construction of New Court in 1881, with letters on a series of shields along the string course above the first floor spelling out the text from Psalm 127:1, "Nisi Dominus aedificat domum…" ("Except the Lord build the house, their labour is but vain that build it").

Building work continued into the 20th century with W. D. Caröe as architect. He added Pitt Building (M staircase) between Ivy Court and Waterhouse's Lodge, and extended New Court with the construction of O staircase on the other side of the Lodge. He linked his two buildings with an arched stone screen, Caröe Bridge, along Pembroke Street in a late Baroque style, the principal function of which was to act as a bridge by which undergraduates might cross the Master's forecourt at first-floor level from Pitt Building to New Court without leaving the College or trespassing in what was then the Fellows' Garden.

In 1926, as the Fellows had become increasingly disenchanted with Waterhouse's Hall, Maurice Webb was brought in to remove the open roof, put in a flat ceiling and add two storeys of sets above. The wall between the Hall and the Fellows' Parlour was taken down, and the latter made into a High Table dais. A new Senior Parlour was then created on the ground floor of Hitcham Building. The remodelling work was completed in 1949 when Murrary Easton replaced the Gothic tracery of the windows with a simpler design in the style of the medieval Hall.

In 1933 Maurice Webb built a new Master's Lodge in the south-east corner of the College gardens, on land acquired from Peterhouse in 1861. Following the war, further accommodation was created with the construction in 1957 of Orchard Building, so called because it stands on part of the Foundress's orchard. Finally, in a move to accommodate the majority of junior members on the College site rather than in hostels in the town, in the 1990s Eric Parry designed a new range of buildings on the site of the Master's Lodge, with a new Lodge at the west end. "Foundress Court" was opened in 1997 in celebration of the College's 650th Anniversary. In 2001 the Library was extended to the east and modified internally. 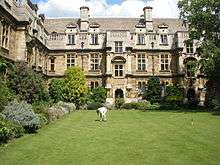 Pembroke's enclosed grounds also house some gardens, sporting vegetation. Highlights include "The Orchard" (a patch of semi-wild ground in the centre of the college), an impressive row of Plane Trees and a bowling green, re-turfed in 1996, which is reputed to be among the oldest in continual use in Europe.

A panorama of Old Court showing the college's dining Hall, library and chapel. 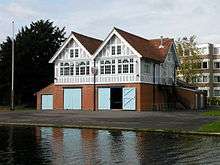 Pembroke College has both graduate and undergraduate students, termed Valencians, after the College's original name, and its recreational rooms named as "parlours" rather than the more standard "combination room". The undergraduate student body is represented by the Junior Parlour Committee (JPC). The graduate community is represented by the Graduate Parlour Committee (GPC). In March 2016, the Junior Parlour Committee was featured in national newspapers after it cancelled the theme of an "Around The World In 80 Days" dance party.[4][5][6][7]

There are many clubs and societies organised by the students of the college, such as the boat club Pembroke College Boat Club and the college's dramatic society the Pembroke Players, which has been made famous by alumni such as Peter Cook, Eric Idle, Tim Brooke-Taylor, Clive James and Bill Oddie and is now in its 60th year.

Pembroke is the only Cambridge college to have an International Programmes Department, providing opportunities for international students to spend a semester (mid-January to mid-June), or part of the summer, in Cambridge. The Spring Semester Programme is a competitive programme for academically outstanding students who wish to follow a regular Cambridge degree course as fully matriculated members of the University. There are around thirty places each year.[8]

In the summer the College offers the eight-week Pembroke-King's Programme (PKP). As well as the academic content, trips are made to locales such as London, and the programme has a series of formal halls, which are described as "three-course candlelit meals" serving "interesting" fare in Pembroke's historic dining hall.[9] The Pembroke-King's Programme is also the programme for which the prestigious Thouron Prize is awarded, fully supporting nine American undergraduates from Harvard, Yale, and UPenn.[10] 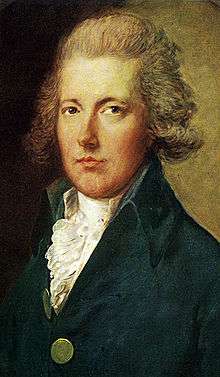 William Pitt the Younger, the youngest ever British Prime Minister and an alumnus of the College 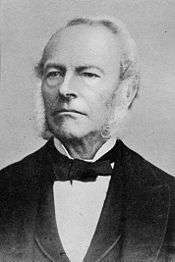 Sir George Gabriel Stokes, Lucasian Professor, a mathematician and physicist at the College who made important contributions to fluid dynamics 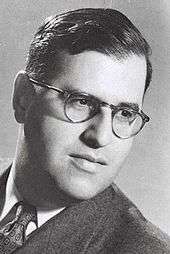 Abba Eban, Israeli Foreign Minister and VP of the United Nations General Assembly, who studied Arabic and Hebrew as a Fellow at the College 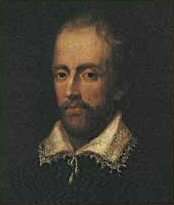 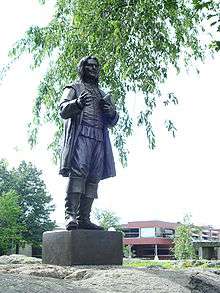 Institutions named after the college

Pembroke College, the former women's college at Brown University in the United States, was named for the principal building on the women's campus, Pembroke Hall, which was itself named in honour of the Pembroke College (Cambridge) alumnus Roger Williams, a co-founder of Rhode Island.

In 1865 Pembroke College donated land for the formation of the Suffolk memorial to Prince Albert. The land at Framlingham in the county of Suffolk was used to build a school, The Albert Memorial College. The school today is known as Framlingham College and one of its seven houses is named Pembroke House in recognition of the contribution Pembroke College has made to the School. 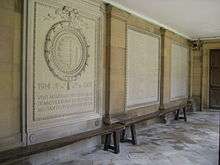