Francis II (François de Lorraine; 27 February 1572 – 14 October 1632), was the son of Charles III, Duke of Lorraine and Claude of Valois. He was Duke of Lorraine briefly in 1625, quickly abdicating in favour of his son.

The youngest son of Charles III, Duke of Lorraine and his wife Princess Claude of France he was styled the Count of Vaudémont during his father's reign (1545–1608) as well as during that of his older brother Henri (1608–1624). His father appointed him as his deputy (Lieutenant General) of Lorraine, while in 1594 he was out of the country.

That same year he was Lieutenant General of the French king in Toul and Verdun. From September to October 1606 he was in his father's diplomatic mission in England. In 1621 he fell out with his brother Henri II, who had become Duke in 1608, and went to Germany for the emperor to fight the Protestants.

The reason for the rift was Henry's intention to have Francis' son Charles marry Henri II's daughter Nicolette of Lorraine and to leave Lorraine to her, even though the will of Duke René II had provided for a strictly male succession. Henri and his wife Margerita Gonzaga had only had daughters and females could not inherit the Duchy of Lorraine and its various other territories. After negotiations, the issue was then resolved and the marriage took place but the couple did not have any children and the duchy was to revert to Francis' other son, the future Nicholas II, Duke of Lorraine. 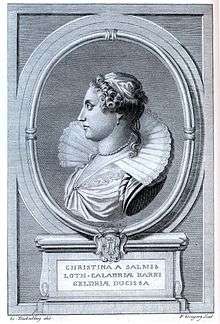 Engraving of his wife, Christina of Salm.

After Francis' brother died on 31 July 1624, the situation became complicated; Henri's final rules specified that Charles could only be the Duke of Lorraine as Nicolette's husband and was styled as the Prince consort of Lorraine.

In November 1625, however, it was Francis himself who became the ruler of Lorraine. Having claimed the duchy for himself, he got it on 21 November 1625 from the duchy's States General.

After he had paid the duchy's debt out of its treasury five days later, he abdicated in favor of his son, who by then had pushed aside his wife and who then, as sole Duke, ruled in his own right.

In his will, Francis stated that he "never had ambitions to wear a crown in this world". After his abdication, Francis II took on the management of the county of Vaudémont. He died less than a year later.

He married Christina of Salm and had the following issue: