Gerard David (c. 1460 – 13 August 1523) was an Early Netherlandish painter and manuscript illuminator known for his brilliant use of color. Only a bare outline of his life survives, although some facts are known. He may have been the "Meester gheraet van brugghe" who became a master of the Antwerp guild in 1515. He was very successful in his lifetime and probably ran two workshops, in Antwerp and Bruges.[2] His reputation diminished in the 17th century until he was rediscovered in the 19th century. 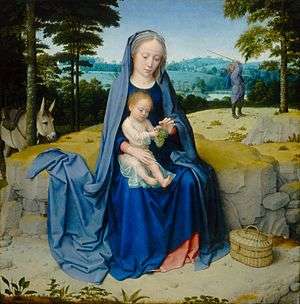 The Rest on The Flight into Egypt, c. 1510, National Gallery of Art, Washington D.C.

He was born in Oudewater, now located in the province of Utrecht. His year of birth is approximate as c 1460 on the basis that he looks to be around 50 years in the 1509 self-portrait found in his "Virgin among the Virgins".[3] He spent his mature career in Bruges, where he was a member of the painters' guild. Upon the death of Hans Memling in 1494, David became Bruges' leading painter. He moved to Bruges in 1483, presumably from Haarlem, where he had formed his early style under Albert van Oudewater, and joined the guild of St Luke at Bruges in 1484.[4] He became dean of the guild in 1501,[5] and in 1496 married Cornelia Cnoop, daughter of the dean of the goldsmiths' guild.[6] David was one of the town's leading citizens.[7]

Ambrosius Benson served his apprenticeship with David, but they came into dispute around 1519 over a number of paintings and drawings Benson had collected from other artists. Because of a large debt owed to him by Benson,[8] David had refused to return the material. Benson pursued the matter legally and won, leading to David serving time in prison.[9][10]

He died on 13 August 1523 and was buried in the Church of Our Lady at Bruges.

David had been completely forgotten when in the early 1860s he was rescued from oblivion by William Henry James Weale, whose researches in the archives of Bruges brought to light the main facts of the painter's life and led to the reconstruction of David's artistic personality,[11] beginning with the recognition of David's only documented work, the Virgin Among Virgins at Rouen.[12] 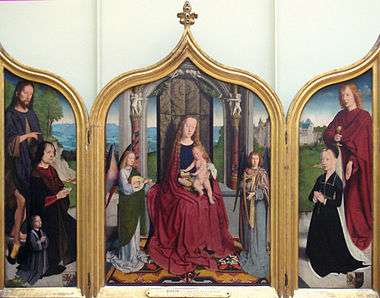 Triptych of the Sedano family, c.1495, an example of Oriental carpets in Renaissance painting. Louvre Museum.

David's surviving work mainly consists of religious scenes. They are characterised by an atmospheric, timeless, and almost dream like serenity, achieved through soft, warm and subtle colourisation, and masterful handling of light and shadow.[13] He is innovative in his recasting of traditional themes and in his approach to landscape, which was then only an emerging genre in northern European painting.[3] His ability with landscape can be seen in the detailed foliage of his Triptych of the Baptism and the forest scene in the New York Nativity.[13]

Although may of the art historians of the early 20th century, including Erwin Panofsky and Max Jakob Friedländer saw him as a painter who did little but distill the style of others and painted in an archaic and unimaginative style. However today most view him as a master colourist, and a painter who according to the Metropolitan Museum of Art, worked in a "progressive, even enterprising, mode, casting off his late medieval heritage and proceeding with a certain purity of vision in an age of transition."[11]

In his early work David followed Haarlem artists such as Dirk Bouts, Albert van Oudewater and Geertgen tot Sint Jans, though he had already given evidence of superior power as a colourist. To this early period belong the St John of the Richard von Kaufmann collection in Berlin and the Salting's St Jerome. In Bruges came directly under the influence of Memling, the master whom he followed most closely. It was from him that David acquired a solemnity of treatment, greater realism in the rendering of human form, and an orderly arrangement of figures.

He visited Antwerp in 1515 and was impressed with the work of Quentin Matsys,[3] who had introduced a greater vitality and intimacy in the conception of sacred themes. 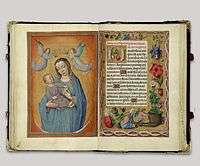 Virgin and Child on a Crescent Moon in the Rothschild Prayerbook, c. 1500–20

The works for which David is best known are the altarpieces painted before his visit to Antwerp: the Marriage of St Catherine at the National Gallery, London; the triptych of the Madonna Enthroned and Saints of the Brignole-Sale collection in Genoa; the Annunciation of the Sigmaringen collection; and above all, the Madonna with Angels and Saints, which he donated to the Carmelite Nuns of Sion at Bruges,[14] and which is now in the Rouen museum.[15]

Only a few of his works have remained in Bruges: The Judgment of Cambyses, The Flaying of Sisamnes and the Baptism of Christ in the Groeningemuseum, and the Transfiguration in the Church of Our Lady.

The rest were scattered around the world, and to this may be due the oblivion into which his very name had fallen; this, and the fact that, some believed that for all the beauty and the soulfulness of his work, he had nothing innovative to add to the history of art.[11] 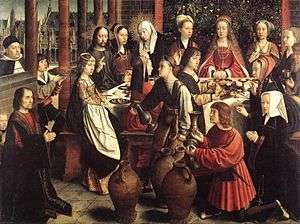 Even in his best work he had only given newer variations of the art of his predecessors and contemporaries. His rank among the masters was renewed, however, when a number of his paintings were assembled at the seminal 1902 Gruuthusemuseum, Bruges exhibition of early Flemish painters.

He also worked closely with the leading manuscript illuminators of the day, and seems to have been brought in to paint specific important miniatures himself, among them a Virgin among the Virgins in the Morgan Library, a Virgin and Child on a Crescent Moon in the Rothschild Prayerbook,[16] and a portrait of the Emperor Maximilian in Vienna. Several of his drawings also survive, and elements from these appear in the works of other painters and illuminators for several decades after his death.[17]

At the time of David's death, the glory of Bruges and its painters was on the wane: Antwerp had become the leader in art as well as in political and commercial importance. Of David's pupils in Bruges, only Isenbrant, Albert Cornelis and Ambrosius Benson achieved importance. Among other Flemish painters, Joachim Patinir and Jan Mabuse were to some degree influenced by him. 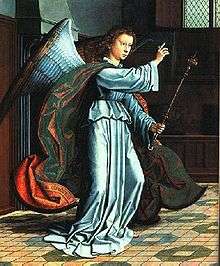