The GBU-39 Small Diameter Bomb (SDB) is a 250 lb (110 kg) precision-guided glide bomb that is intended to provide aircraft with the ability to carry a higher number of more accurate bombs. Most US Air Force aircraft will be able to carry (using the BRU-61/A rack) a pack of four SDBs in place of a single 2,000 lb (907 kg) bomb.[9] 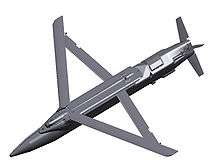 The original SDB is equipped with a GPS-aided inertial navigation system to attack fixed/stationary targets such as fuel depots, bunkers, etc. The second variant (Raytheon's GBU-53 SDB II) will include a thermal seeker and radar with automatic target recognition features for striking mobile targets such as tanks, vehicles, and mobile command posts.[11]

The small size of the bomb allows a single strike aircraft to carry more of the munitions than is possible using currently available bomb units. The SDB carries approximately 38 lb (17 kg) of AFX-757 high explosive. It also has integrated "DiamondBack" type wings which deploy after release, increasing the glide time and therefore the maximum range. Its size and accuracy allow for an effective munition with less collateral damage.[12] Warhead penetration is 3 feet (0.91 m) of steel reinforced concrete and the fuze has electronic safe and fire (ESAF) cockpit selectable functions, including air burst and delayed options.[13]

The GBU-39 has a circular error probable (CEP) of 5–8 m (16–26 ft).[12] CEP is reduced by updating differential GPS offsets prior to weapon release. These offsets are calculated using an SDB Accuracy Support Infrastructure, consisting of three or more GPS receivers at fixed locations transmitting calculated location to a correlation station at the theatre Air Operations Center. The corrections are then transmitted by Link 16 to SDB-equipped aircraft.

In November 2014, the U.S. Air Force began development of a version of the SDB I intended to track and attack sources of electronic warfare jamming directed to disrupt the munitions' guidance. The home-on-GPS jam (HOG-J) seeker works similar to the AGM-88 HARM to follow the source of a radio-frequency jammer to destroy it.[14][15]

In January 2016, the Air Force awarded a contract to Scientific Systems Co. Inc. to demonstrate the company's ImageNav technology, a vision-based navigation and precision targeting system that compares a terrain database with the host platform's sensor to make course corrections. ImageNav technology has demonstrated target geo-location and navigation precision greater than three meters.[16]

In January 2016, Orbital ATK revealed that the Alternative Warhead (AW), designed for the M270's GMLRS to achieve area effects without leaving behind unexploded ordnance, had been successfully tested on the SDB.[17]

In 2002, while Boeing and Lockheed Martin were competing to develop the Small Diameter Bomb, Darleen A. Druyun—at that time Principal Deputy Assistant Secretary of the Air Force for Acquisition and Management—deleted the requirement for moving target engagement, which favored Boeing. She was later convicted of violating a conflict of interest statute.[18][19]

On May 1, 2009, Raytheon announced that it had completed its first test flight of the GBU-53/B Small Diameter Bomb II, which has a data link and a tri-mode seeker built with technology developed for the Precision Attack Missile.[20] And on August 10, 2010 the U.S. Air Force awarded a $450 million contract for engineering and development.[21]

GBU-39 began separation tests on the F-22 in early September 2007 after more than a year of sometimes difficult work to integrate the weapon in the weapons bay and carry out airborne captive carry tests.

The SDB is currently integrated on the F-15E Strike Eagle, Panavia Tornado, JAS-39 Gripen and AC-130W. Future integration is planned for the F-16 Fighting Falcon (already incorporated on Dutch F-16's), F-22 Raptor, F-35 Lightning II, A-10 Thunderbolt II, B-1 Lancer, B-2 Spirit, and the B-52 Stratofortress. Other aircraft, including UCAVs, may also receive the necessary upgrades.

The General Atomics Predator C is also planned to carry this weapon.[34]

Under a contract awarded in September 2006, Boeing developed a version of the SDB I which replaces the steel casing with a lightweight composite casing and the warhead with a focused-blast explosive such as Dense Inert Metal Explosive (DIME). This should further reduce collateral damage when using the weapon for pin-point strikes in urban areas.[35]

In mid-2012, the U.S. Senate recommended zeroing out funding for the SDB II due to fielding delays with the F-35 Lightning II. With the delay in SDB II fielding, Boeing recommended an upgrade to their SDB as a temporary gap-filler to get desired performance at a fraction of the cost. Called the Laser Small Diameter Bomb (LSDB), it integrates the laser used on the JDAM to enable the bomb to strike moving targets. Boeing began testing the LSDB in 2011 and successfully hit targets traveling 30–50 mph (48–80 km/h).[39] In June 2013, the Air Force announced it would award Boeing a contract to develop and test the LSDB; the contract is for phase one part two engineering, integration and test, and production support and an LSDB Weapon Simulator. Boeing says the LSDB can be built at a lower cost than the planned Raytheon SDB II, as it will use the same semi-active laser sensor as the JDAM to hit moving and maritime targets. However, Boeing admits that it does not have the capability to engage targets in zero-visibility weather, as it lacks the SDB II's millimeter wave radar.[40] The Laser SDB began fielding with the U.S. Special Operations Command in 2014.[15][41]

Boeing is modifying the Small Diameter Bomb with a rocket motor to be launched from ground-based missile systems such as the M270 MLRS. With the Army demilitarizing cluster munitions from M26 rockets, the company says a special adapter case could reuse the rocket to launch the SDB. After the motor launches it to a high enough altitude and speed, the wings will deploy and glide the bomb to its target. The company believes it can fill a gap for long-range precision fires while using its smaller warhead to save larger rocket munitions for strategic targets. While typical MLRS systems follow a ballistic trajectory, the rocket-launched SDB can be launched to an altitude and glide on a selected trajectory.[42][43] Boeing and Saab Group conducted three successful GLSDB tests in February 2015. The system is cost-effective, utilizing an existing weapon paired with a stockpiled rocket motor, while maintaining the loadout on a rocket artillery system. Unlike other artillery weapons, the GLSDB offers 360-degree coverage for high and low angles of attack, flying around terrain to hit targets on the back of mountains, or circling back around to a target behind the launch vehicle. The GLSDB has a range of 150 km (93 mi), and can also hit targets 70 km (43 mi) behind it.[44]