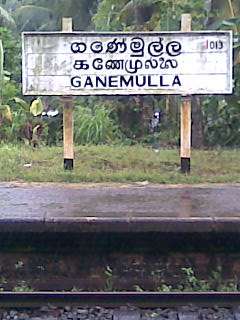 Ganemulla Railway station Name board indicating (013)the Station is (13) mile from Maradana.

Founded during the British era, Ganemulla (Sinhala:ගණේමුල්ල, Tamil:கணேமுல்ல ) is a midsize town situated in the Gampaha District of Sri Lanka. Ganemulla is about 9 km (5.6 mi) from Kadawatha on the Colombo-Kandy road. The nearest city to Ganemulla is Gampaha, which is about 5 kilometres (3.1 mi) away. Ganemulla is surrounded by the towns of Kadawatha, Gampaha, Ja-Ela and Kandana. The population in Ganemulla now more than 6,000 and increasing.The majority of the population are Sinhala Buddhist, with a small Catholic minority.[1]

The Sri Lanka Army Commando Regiment is located in Ganemulla.

An archaeologically important drainage line was discovered nearby Ganemulla railway station recently, believed to be used in the 18th century when some of the coastal areas of Sri Lanka was under the control of Dutch rulers. However this has not undergone a proper excavation and is currently in poor condition due to lack of restoration.