Gerard Kornelis van het Reve (14 December 1923 – 8 April 2006) was a Dutch writer. He started writing as Simon van het Reve and adopted the shorter Gerard Reve in 1973.[1] Together with Willem Frederik Hermans and Harry Mulisch, he is considered one of the "Great Three" of Dutch post-war literature. His 1981 novel De vierde man (The Fourth Man) was the basis for Paul Verhoeven's 1983 film.

Gerard Reve was born in Amsterdam, Netherlands, and was the brother of the Slavicist and essayist Karel van het Reve, who became a staunch anti-communist in his own way; the personal rapport between the brothers was not good. They broke up altogether in the 1980s. 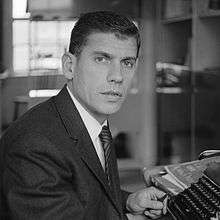 He often insisted that homosexuality was merely a motif (providing idiom – as Roman Catholicism based phrases would differ from e.g. Buddhist wording – and, over time, idiosyncratic Reve-slang) in his work, the deeper theme being the inadequacy of human love (as opposed to divine love). Since the publication of "Op weg naar het einde" (Towards the end) (1963) and "Nader tot U" (Nearer to Thee) (1966), marking his breakthrough to a large audience, he articulated his views on God's creation and human fate, especially in the many collections of letters that he published.

These writings stress a symbolic, rather than ("...only the blind...") literal, understanding of religious texts as the only intellectually acceptable one, and the irrelevance of the Gospel's historical truth. Religion, according to Reve, has nothing to do with the literal, the factual, the moral or the political. It has no quarrel with modern science, because religious truths and empirical facts are in different realms. The observable world has no meaning beyond comparing facts, and, while revelation may not make sense, it has meaning, and it is this meaning that Reve was after in everything he wrote. Philosophically, Reve was influenced by Arthur Schopenhauer, whose works he re-read every winter, and even more so by Carl Jung, according to a Dutch painter who spent some time with the author in France to paint several portraits of him.[3]

His style combines the formal (in the kind of language one would find in a seventeenth-century Bible) with the colloquial, in a highly recognisable way. Similarly, his humour and often paradoxical view of the world relies on the contrast between exalted mysticism and common sense. The irony that pervades his work and his tendency towards extreme statements has caused confusion among readers. Many doubted the sincerity of his conversion to Catholicism, although Reve remained adamant about the truthfulness of his faith, claiming his right to individual notions about religion and his personal experience of it.

Reve's literary career was marked by many controversies. Early on, the Dutch ministry of culture intervened when Reve was to receive a grant, citing the obscene nature of his work.

A member of the Dutch senate, the Calvinist senator Hendrik Algra, spoke on the same subject in a plenary debate. That was the beginning of a string of scandals that didn't stop until the Belgian king Albert refused to hand out a literary prize to Reve when his partner had been charged with indecencies with minors. Reve sometimes welcomed the publicity, but also complained about his continual struggle with the authorities, public opinion and the press.

Gerard Reve was prosecuted in 1966 for allegedly breaking a law against blasphemy. In Nader tot U he describes the narrator's love-making to God, a visitor to his house incarnated in a one-year-old mouse-grey donkey. In April 1968 he was acquitted by the High Council.

Reve came from a communist and atheistic family, but converted to Roman Catholicism.[4] He was a very liberal Roman Catholic, and his ridiculing of some aspects of Catholicism led to tensions in the Dutch Roman Catholic community in the 1960s. Nevertheless, he contributed as a literary advisor to a new Catholic Bible translation, the 'Willibrord' translation.

One of Reve's main themes, along with religion and love, is his intense hatred of communism, its regimes and the tolerance toward it in leftist circles in the western world.

In 1975, he appeared at a Dutch poetry festival, wearing (among other things, a crucifix and peace symbol) a swastika as well as a hammer and sickle on his clothes, and read a poem that spoke of immigration in racist terms, though stressing cultural differences and using "zwart" (black) rather than "neger/nikker" (negro/nigger), in a solemn language that insulted many people, especially creoles from Surinam, many of whom had arrived recently on the eve of the decolonization of Surinam that was to take place in November 1975.

This event led to much controversy, and many people have since wondered whether Reve had lost his mind, or had been alluding to something else. In the face of a wave of criticism Reve did not move an inch, and his claims of being 'too intelligent to be a racist' and never wanting to inflict any harm on any racial grounds partly got lost in the confusion generated by his ever-present irony.

In 2001, he was awarded the Prijs der Nederlandse Letteren, the most prestigious prize for Dutch-language authors, but King Albert II of Belgium refused to present it to him because his partner had been accused of pedophilia. The money was awarded by bank transfer and the certificate delivered.[1][5][6]

During the last years of his life, he began to suffer from Alzheimer's disease, and he died of it, in Zulte, Belgium, on 8 April 2006 at the age of 82.