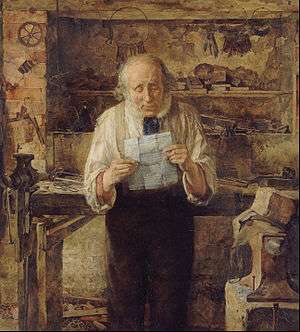 A letter is a written message from one party to another containing information. Letters promote the preservation of communication between both parties; they may bring friends or relatives closer together, enrich professional relationships and provide a means of self-expression. Letters contribute to the protection and conservation of literacy.[1] Letters have been sent since antiquity and are mentioned in the Iliad.[2] Works by both Herodotus and Thucydides also mention letters.[3] 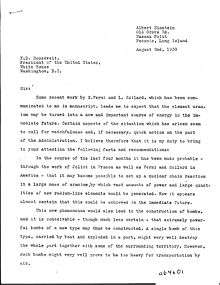 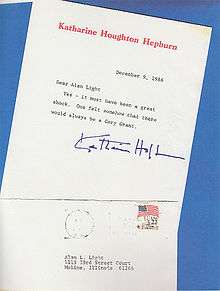 Historically, letters have existed from the time of ancient India, ancient Egypt and Sumer, through Rome, Greece and China, up to the present day. During the seventeenth and eighteenth century, letters were used to self-educate. Letters were a way to practice critical reading, self-expressive writing, polemical writing and also exchange ideas with like-minded others. For some people, letters were seen as a written performance. For others, it was not only seen as a performance but also as a way of communication and a method of gaining feedback. Letters make up several of the books of the Bible. Archives of correspondence, whether for personal, diplomatic, or business reasons, serve as primary sources for historians. At certain times, the writing of letters has risen to be an art form and a genre of literature, for instance in Byzantine epistolography.[4]

In the ancient world letters were written on a various different materials, including metal, lead, wax-coated wooden tablets, pottery fragments, animal skin, and papyrus. From Ovid, we learn that Acontius used an apple for his letter to Cydippe.[5]

As communication technology has diversified, posted letters have become less important as a routine form of communication. For example, the development of the telegraph drastically shortened the time taken to send a communication, by sending it between distant points as an electrical signal. At the telegraph office closest to the destination, the signal was converted back into writing on paper and delivered to the recipient. The next step was the telex which avoided the need for local delivery. Then followed the fax (facsimile) machine: a letter could be transferred electrically from the sender to the receiver through the telephone network as an image. Today, the internet, by means of email, plays a large part in written communications; however, these email communications are not generally referred to as letters but rather as e-mail (or email) messages, messages or simply emails or e-mails, with only the term "letter" generally being reserved for communications on paper.

The study of letter writing 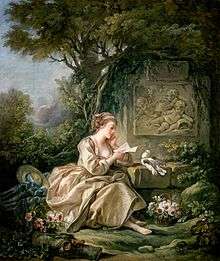 Despite email, letters are still popular, particularly in business and for official communications. Letters have the following advantages over email:

Here is how a letter gets from the sender to the recipient:

This whole process, depending on how far the sender is from the recipient, can take anywhere from a day to 3–4 weeks. International mail is sent via trains and airplanes to other countries.

However, in 2008, Janet Barrett from the UK, received a RSVP to a party invitation addressed to 'Percy Bateman', from 'Buffy', originally posted on 29 November 1919. It had taken 89 years to be delivered by the Royal Mail.[7]

There are a number of different types of letter: