Gorlice (pronounced [ɡɔrˈlʲit͡sɛ], Ukrainian: Горлиці, Horlytsi; Yiddish: גאָרליץ‎, Gorlitz; German Görlitz) is a city and an urban municipality ("gmina") in south eastern Poland with around 29,500 inhabitants (2008). It is situated south east of Kraków and south of Tarnów between Jasło and Nowy Sącz in the Lesser Poland Voivodeship (since 1999), previously in Nowy Sącz Voivodeship (1975–1998). It is the capital of Gorlice County.

The city lies between the Ropa and Sękówka river valleys, surrounded by several mountain ranges of the Carpathian Mountains, namely their part called Beskid Niski (Low Beskids) massive. It is located in the heartland of the Doły (Pits), and its average elevation above sea level is 380 metres (1,247 feet), although there are some more considerable hills located within the confines of the city. The city is nowadays situated in a heavily populated region 14.6 miles (23.5 kilometres) from Jasło, 21.2 mi (34.1 km) from Nowy Sącz, 25.5 mi (41.0 km) from Tarnów, and 62.6 mi (100.7 km) from Kraków.

Gorlice was founded during the reign of Casimir the Great in 1354 by German settlers from Görlitz. In that year, the Stolnik of Sandomierz, Derslaw Karwacjan, received royal permission to found a town in a densely forested area of the Carpathian foothills. At that time, this part of Lesser Poland was sparsely populated, mostly by the Walddeutsche. The existence of the town is mentioned in sources from 1388, 1404 and 1417. In the 15th century, Gorlice remained private property of the Karwacjan family.

The town quickly developed, becoming a regional center of crafts and trade. In 1504, Jan Karwacjan received royal permission for two fairs annually, and a weekly market. In the period known as Polish Golden Age, Gorlice prospered. Its artisans and merchants had contacts not only with other Polish towns, but also with merchants from Upper Hungary. In the second half of the 16th century, Gorlice became property of the Odrowaz family, which supported Protestant Reformation. Swedish invasion of Poland (1655–60) brought widespread destruction: the population of Gorlice fell from 1200 (as for 1657) to only 284 (as for 1662).

As a result of the first Partition of Poland (Treaty of St-Petersburg dated 5 July 1772), the town area was attributed to the Habsburg Empire[1] (for more details, read the article Kingdom of Galicia and Lodomeria). In 1806, the Austrian government sold the town to a local nobleman, Jan Nepomucen Stadnicki of Roznow.

Until 1918, the town remained part of the Austria side (Cisleithania) after the compromise of 1867, head (since 1865) of the county with the same name, one of the 78 Bezirkshauptmannschaften in Austrian Galicia province (Crown land).[2] By mid-19th century, the population of Gorlice was some 4000. The town entered the period of its prosperity after its resident Ignacy Lukasiewicz invented kerosene lamp. In a few years, sprawling oil wells emerged in Gorlice, and the town was called the cradle of Polish oil industry; its rapid industrialization was spurred with construction of a railroad (1883).

By early 20th century, the population of Gorlice grew to 6000, but its development was halted by World War One. The city was the focal point of the German Gorlice-Tarnów Offensive during World War I, in May 1915. Extremely heavy and prolonged fighting took place here, Gorlice frequently changed hands, and as a result, the town was completely destroyed. Hence the "Gorlice fair" or "Gorlice days" held every year during the May Bank Holidays and adjoining days, which are enjoyed by many visitors both domestic and from abroad.

In the Second Polish Republic, Gorlice belonged to Kraków Voivodeship. Since local oil wells had almost dried, the center of Polish oil industry moved eastwards, to Boryslaw. This resulted in widespread unemployment, street demonstrations and increased popularity of Communist ideology among local workers. On 1 May 1936, a May Day rally attracted 20,000 people.

German occupation of Gorlice began on 7 September 1939 (see Invasion of Poland). During the war, the town's Jewish community was murdered. On 16 January 1945, the Red Army captured Gorlice. 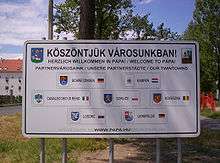 Gorlice is twinned with: