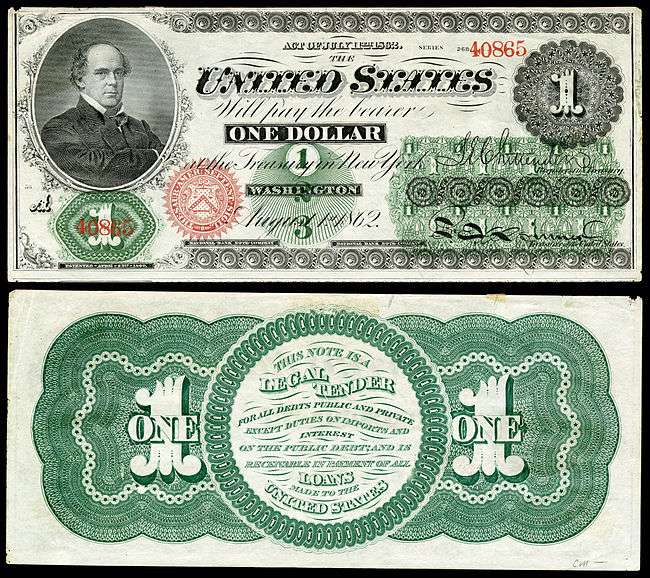 Image of one dollar "Greenback", first issued in 1862

Greenbacks were paper currency (printed in green on the back) issued by the United States during the American Civil War. They were in two forms: Demand Notes, issued in 1861–1862, and United States Notes issued in 1862–1865. They were legal tender by law, but were not backed by gold or silver, only the credibility of the U.S. government.[1]

Before the Civil War, the only money issued by the United States was gold and silver coins, and only such coins ("specie") were legal tender; that is, payment in that form had to be accepted.

Paper currency in the form of banknotes was issued by privately owned banks; the notes being redeemable for specie at the bank's office. They were not legal tender. Such notes had value only if the bank could be counted on to redeem them. If a bank failed, its notes became worthless.

National governments had in the past issued paper money and made it legal tender, but usually with at least the pretense that the notes would be redeemable for specie at some time. Continental dollars issued by the Continental Congress during the American Revolution had no such backing, and soon became almost worthless.

During the early 1800s, the U.S. issued interest-bearing Treasury Notes in various denominations. These were not legal tender, but could be used to pay customs duties.

When President Abraham Lincoln assumed office, he understood the importance of money for the war effort. With this in mind, Lincoln appointed Salmon P. Chase as Secretary of the Treasury. As Secretary, Chase alone was authorized to act on all matters pertaining to the country’s finances. Chase, like almost everyone at the time, underestimated the duration and cost of the war.[2] Within a few months it was clear that the costs of the war would run far beyond the government's limited income from tariffs and excises.

The Lincoln Administration sought loans from major banks, mostly in New York City. The banks demanded very high interest rates of 24 to 36 percent. Lincoln refused to borrow on such terms and called for other solutions.[3]

The United States Demand Note was authorized by Congress on 17 July 1861 and issued on 10 August 1861.
Main article: Demand Notes

This was the first measure to finance the war. In July 1861, Congress authorized $50,000,000 in Demand Notes. They bore no interest, but could be redeemed for specie "on demand". They were not legal tender, but like Treasury Notes could be used to pay customs duties.

Unlike private and state banknotes, Demand Notes were printed on both sides. The reverse side was printed in green ink, and so the Demand Notes were dubbed "greenbacks". Initially they were discounted relative to gold, but being fully redeemable in gold were soon at par. In December 1861, the government had to suspend redemption, and they declined. Chase authorized paying interest on Demand Notes, which sustained their value.

The later United States Notes could not be used to pay customs duties, only gold and Demand Notes. Importers therefore continued to use Demand Notes in place of gold. In March 1862, Demand Notes were made legal tender.

As Demand Notes were used to pay duties, they were taken out of circulation. By mid-1863, about 95% of them were gone.

The amount of Demand Notes issued was far insufficient to meet the war expenses of the government, but even so was not supportable.

The solution came from Colonel "Dick" Taylor, an Illinois businessman serving as a volunteer officer. Taylor met with Lincoln in January 1862, and suggested issuing unbacked paper money. Taylor said "Just get Congress to pass a bill authorizing the printing of full legal tender treasury notes... and pay your soldiers with them and go ahead and win your war with them also. If you make them full legal tender... they will have the full sanction of the government and be just as good as any money; as Congress is given the express right by the Constitution."[3]

Issuing unbacked paper money was not an idea Lincoln really liked, but soon there was mounting pressure in Congress to do something. The government could either print its own money or go into deep perpetual debt to foreign creditors. So the President was quick to endorse Taylor's proposal.[4] On February 25, 1862, Congress passed the first Legal Tender Act, which authorized the issuance of $150 million in United States Notes.[5]

The reverse of the notes were printed with green ink, and were thus called "greenbacks" by the public, being considered equivalent to the Demand Notes already known as such. These Notes were issued by the United States to pay for labor and goods.[3][6]

Earlier Secretary Chase had the slogan, "In God We Trust" engraved on U. S. coins. During a cabinet meeting there was some discussion of adding it to the U. S. Notes as well. Lincoln, however, humorously remarked, "If you are going to put a legend on the greenbacks, I would suggest that of Peter and Paul, 'Silver and gold I have none, but such as I have I give to thee.'"[7]

Interestingly, California and Oregon defied the Legal Tender Act. Gold was more available on the West Coast and merchants in those states did not want to accept greenbacks (U. S. Notes) at face value. They blacklisted people who tried to use them at face value. California banks would not accept greenbacks for deposit and the state would not accept them for payment of taxes. Both states ruled that greenbacks were a violation of their state constitutions.[7]

As the government issued hundreds of millions in greenbacks, the value of the greenback against gold declined. But though the decline was substantial, it was nothing like the collapse of the Continental dollar.

In 1862, the greenback declined against gold until by December gold was at a 29% premium. By spring of 1863 the greenback declined further, to 152 against 100 dollars in gold. However, after the Union victory at Gettysburg the greenback recovered to 131 dollars to 100 in gold. In 1864 it declined again as Grant was making little progress against Lee who held strong in Richmond throughout most of the war. The Greenback's low point came in July of that year: 258 greenbacks equal to 100 gold. When the war ended in April 1865 the greenback made another remarkable recovery to 150.[8]