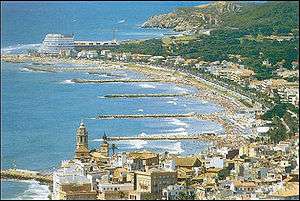 A groyne (groin in the United States) is a rigid hydraulic structure built from an ocean shore (in coastal engineering) or from a bank (in rivers) that interrupts water flow and limits the movement of sediment. It is usually made out of wood, concrete or stone. In the ocean, groynes create beaches or prevent them being washed away by longshore drift. In a river, groynes prevent erosion and ice-jamming, which in turn aids navigation. Ocean groynes run generally perpendicular to the shore, extending from the upper foreshore or beach into the water. All of a groyne may be under water, in which case it is a submerged groyne. The areas between groups of groynes are groyne fields. Groynes are generally placed in groups. They are often used in tandem with seawalls. Groynes, however, may cause a shoreline to be perceived as unnatural. 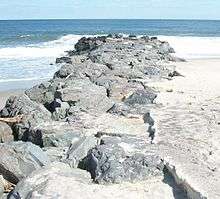 A groyne's length and elevation, and the spacing between groynes is determined according to local wave energy and beach slope. Groynes that are too long or too high tend to accelerate downdrift erosion, and are ineffective because they trap too much sediment. Groynes that are too short, too low, or too permeable are ineffective because they trap too little sediment. If a groyne does not extend far enough landward, water (for example at a high tide combined with a storm surge) may flow past the landward end and erode a channel bypassing the groyne, a process known as flanking.

A groyne creates and maintains a wide area of beach or sediment on its updrift side, and reduces erosion on the other. It is a physical barrier to stop sediment transport in the direction of longshore drift (also called longshore transport). This causes a build-up, which is often accompanied by accelerated erosion of the downdrift beach, which receives little or no sand from longshore drift (this is known as terminal groyne syndrome, as it occurs after the terminal groyne in a group of groynes). Groynes add sediment to the beach by capturing downward drift. However, this can cause severe erosion on shorelines downstream from the groyne. If a groyne is correctly designed, then the amount of material it can hold will be limited, and excess sediment will be free to move on through the system. However, if a groyne is too large it may trap too much sediment, which can cause severe beach erosion on the down-drift side. 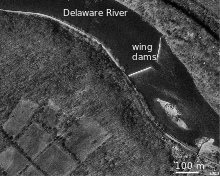 Aerial photograph of the Lumberville Dam on the Delaware River. Some water is pouring over the wing dams or groins; there is a navigation channel between them.

River groynes (spur dykes, wing dykes, or wing dams) are often constructed nearly perpendicular to the riverbanks, beginning at a riverbank with a root and ending at the regulation line with a head. They maintain a channel to prevent ice jamming, and more generally improve navigation and control over lateral erosion, that would form from meanders. Groynes have a major impact on the river morphology: they cause autonomous degradation of the river.[1]

They are also used around bridges to prevent bridge scour. 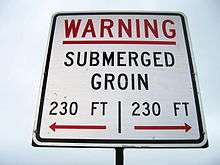 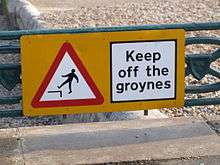 A "Keep off the groynes" sign in Brighton with a groyne showing in the background.

Groynes can be distinguished by how they are constructed, whether they are submerged, their effect on stream flow or by shape.[2]

Groynes can be permeable, allowing the water to flow through at reduced velocities, or impermeable, blocking and deflecting the current.

By whether they are submerged

Groynes can be submerged or not under normal conditions. Usually impermeable groynes are non-submerged, since flow over the top of solid groynes may cause severe erosion along the shanks. Submerged groynes, on the other hand, may be permeable depending on the degree of flow disturbance needed.

By their effect on stream flow

Groynes can be attracting, deflecting or repelling.