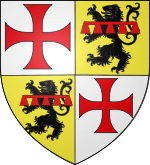 Guillaume de Beaujeu, aka William of Beaujeu, was the 21st Grand Master of the Knights Templar, from 1273 until his death during the siege of Acre in 1291. He was the last Grand Master to preside in Palestine.

During his tenure the new Mamluk Sultan, Qalawun, easily conquered in 1289 the County of Tripoli, which had ignored Beaujeu's warnings. In 1290 Qalawun marched on Acre, the capital of the remnant of the Kingdom of Jerusalem, but died in November before launching the attack. His son Al-Ashraf Khalil, however, decided to continue the campaign. Beaujeu led the defence of the city.

At one point during the siege, he dropped his sword and walked away from the walls. His knights remonstrated. Beaujeu replied: "Je ne m'enfuis pas; je suis mort. Voici le coup." ("I'm not running away; I am dead. Here is the blow.") He raised his arm to show the mortal wound he had received - arrow had penetrated his mail under his armpit so that only the fletches were visible. Beaujeu died of his wound and the city fell to the Mamluks, signalling the end of Crusader occupation of the Holy Land.