Trouvé was born January 2, 1839 in La Haye-Descartes (Indre-et-Loire, France) and died July 27, 1902 in Paris. A polymath, he was highly respected for his innovative skill in miniaturization.

Gustave Trouvé was born into a modest family, his father, Jacques Trouvé, was a cattle dealer.,[1] In 1850, he studied to be a locksmith in Chinon College, then in 1854-55 at the École des Arts et Métiers in Angers.[2] His studies incomplete through poor health, he left his local region for Paris where he obtained a job with a clockmaker.[3]

From 1865 Trouvé set up a workshop in central Paris where he innovated and patented many widely differing applications of electricity, regularly reported on by popular science magazines of the time such as La Nature.[4] He invented a carbon-zinc pocket-sized battery to power his miniature electric automata which soon became very popular. [5] [6] A similar battery was invented and widely commercialized by Georges Leclanché. 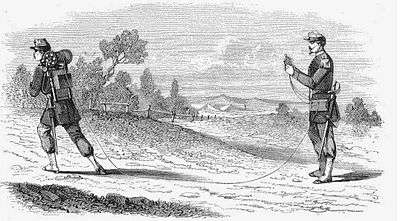 Gustave Trouvé took part in the improvement in communication systems with several noteworthy innovations. In 1872 he developed a portable military telegraph whose cabling enabled rapid communication up to a distance of one kilometer, enabling the swift transmission of both orders and reports back from the Front.[7] In 1874, he developed a device for locating and extracting metal objects such as bullets from human patients, the prototype of today’s metal detector.[8] In 1878, he improved the sound intensity of Alexander Graham Bell’s telephone system by incorporating a double membrane. The same year he invented a highly sensitive portable microphone. Trouvé soon came to be known and respected by his talent for miniaturization. The same year, using a battery developed by Gaston Planté, and a small incandescent airtight bulb, he innovated a "polyscope", the prototype of today’s endoscope.[9] 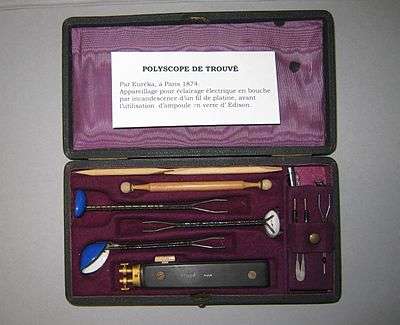 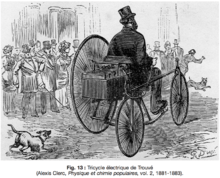 In 1880 Trouvé improved the efficiency of a small electric motor developed by Siemens and using the recently developed rechargeable battery, fitted it to an English James Starley tricycle, so inventing the world’s first electric vehicle.[10] Although this was successfully tested on April 19, 1881 along the Rue Valois in central Paris, he was unable to patent it.[11] Trouvé swiftly adapted his battery-powered motor to marine propulsion; to make it easy to carry his marine conversion to and from his workshop to the nearby River Seine, Trouvé made it portable and removable from the boat, thus inventing the outboard engine.[12] On May 26, 1881, the 5m Trouvé prototype, called Le Téléphone reached a speed of 1 m/s (3,6 km/h) going upstream et 2,5 m/s (9 km/h) downstream. 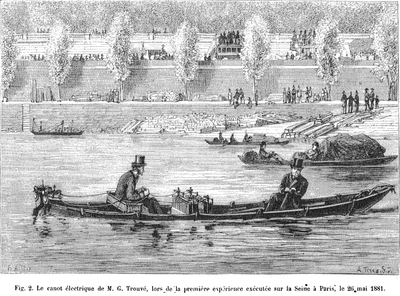 [13] Trouvé exhibited his boat (but not his tricycle) and his electro-medical instruments at the International Electrical Exhibition in Paris and soon after was awarded the Légion d'Honneur.[14] He also miniaturized his electric motor to power a model airship, a dental drill, a sewing machine and a razor.[15][16]

Gustave Trouvé next invented his “Photophore”, or battery-powered frontal headlamp, which he developed for a client, Dr Paul Hélot, an ear-nose-and throat specialist of Rouen. This wearable, direct shaft, lighting system could be oriented by head movements, so freeing the hands of its wearer. A file of correspondence between these two men enables one to place this invention during 1883. Trouvé soon modified their frontal headlamp both for use by miners, rescue workers, and later by speleologists, in dark surroundings, but also by tinting the light with various colors as theater jewelry for artiste troupes in Paris and Europe. The latter became known as “luminous electric jewels” and was the forerunner of today's wearable technology.[17] In 1884, Trouvé fitted an electric boat with both electric horn and a bow-mounted frontal headlamp, the first time such electrical accessories had ever been fitted on any mode of transport.[18] He developed a portable electric safety lamp.[19] In 1887, Trouvé, whose brand name was Eureka (Greek: εὕρηκα =“I have found”, translated into French “J’ai trouvé), developed his auxanoscope, an electric slide projector for itinerant teachers (1887).

Around the same period, Trouvé, a confirmed bachelor uninterested in commercialization, turned his fertile mind skywards. Convinced that the future lay with heavier-the-air machines, he flew a tethered model electric helicopter, the ancestor of the Sikorsky Firefly. 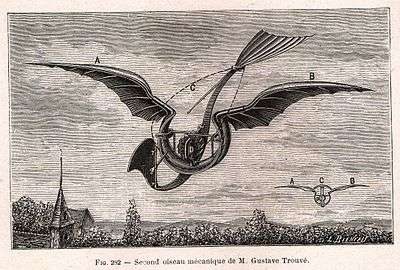 He next built an ornithopter, the wings of which flapped using a rapid succession gun cartridges, enabling it to make a noisy but at the time unheard-of flight of 80 meters.[20]

In 1891 Trouvé developed electric multi-colored fountains for domestic and outdoor use. Seeing the limitations of electrical supply without the reliable support of a national grid, in 1895 he took the recent discovery of acetylene light and had soon harnessed it for domestic lighting.[21] Among his 75 innovations,(see below) he also developed an electric massaging machine, an electric keyboard instrument based on Savart's wheel, a battery-powered wearable lifejacket, a water-jet propelled boat and a streamlined bicycle, as well as several children's toys.

In 1902, Trouvé was working on his latest innovation, a small portable device which used ultra-violet light to treat skin diseases, the prototype of PUVA therapy when he accidentally cut his thumb and index finger. Neglecting the wound, septicemia set in and after amputations at the Saint-Louis Hospital, Paris, the 63-year-old inventor died on July 27, 1902.

When the obligatory concession for his tomb in the cemetery of his native town of Descartes was not renewed, Trouvé’s remains were thrown in to the common grave. His archives were destroyed in February 1980 during an accidental fire in the Town Hall. In 2012, following a French biography by English transport historian Kevin Desmond, a commemorative plaque was officially unveiled on the site of his birthplace. Four years later, following an extended English-language biography, on October 15, 2016, a second plaque was officially unveiled by Desmond and Jacques Boutault, Mayor of Paris 2nd District, on the wall outside his former workshop, 14 rue Vivienne. The search for rare surviving examples of his instruments has become worldwide.On September 24, a Trouvé/Cadet-Picard gold skull stick pin automaton sold at Bonhams of London for $8,000 [22]

Inventions and Innovations in Chronological Order