Lieutenant General Herbert Raymond McMaster (born July 24, 1962 in Philadelphia, Pennsylvania) is an American soldier, and a career officer in the U.S. Army. His current assignment is Director, Army Capabilities Integration Center and Deputy Commanding General, Futures, U.S. Army Training and Doctrine Command. His previous assignment was commander of the Maneuver Center of Excellence at Ft. Benning, Georgia. McMaster previously served as Director of Combined Joint Interagency Task Force-Shafafiyat (CJIATF-Shafafiyat) (Transparency) at ISAF (International Security Assistance Force) Headquarters in Kabul, Afghanistan. He is known for his roles in the Gulf War, Operation Iraqi Freedom, Operation Enduring Freedom, and his reputation for questioning U.S. policy and military leaders regarding the Vietnam War.

McMaster graduated from Valley Forge Military Academy in 1980, where he served as a company commander with the rank of cadet captain. He is a 1984 graduate of West Point, where he played rugby.

He holds Master of Arts and Ph.D. degrees in American history from the University of North Carolina at Chapel Hill, and authored a thesis critical of American strategy in the Vietnam War, which is detailed in his 1997 book Dereliction of Duty.[1] It harshly criticizes high-ranking officers of that era, arguing that they inadequately challenged Defense Secretary Robert McNamara and President Lyndon Johnson on their Vietnam strategy. The book is widely read in Pentagon circles and is on the official reading list of the Marine Corps.[2]

His first assignment after commissioning was to the 2nd Armored Division at Fort Hood, where he served in a variety of platoon and company level leadership assignments with 1st Battalion 66th Armor Regiment. In 1989, McMaster was assigned to the 2nd Armored Cavalry Regiment at Warner Barracks in Bamberg, Germany, where he served until 1992, including deployment to Operation Desert Storm.

During the Gulf War in 1991 he was a captain commanding Eagle Troop of the 2nd Armored Cavalry Regiment at the Battle of 73 Easting.[3] During that battle, though significantly outnumbered and encountering the enemy by surprise as McMaster's lead tank crested a dip in the terrain, the nine tanks of Eagle Troop destroyed over eighty Iraqi Republican Guard tanks and other vehicles without loss, due to the Abrams tank being state-of-the-art armored technology while the Iraqi equipment included grossly outdated T-69s and -72s of the Soviet era.[4]

"At 4:10 p.m. Eagle Troop received fire from an Iraqi infantry position in a cluster of buildings at UTM PU 6801.[19][20] Eagle troop Abrams and Bradleys returned fire, silenced the Iraqi guns, took prisoners, and continued east with the two tank platoons leading. The 12 M1A1 tanks of Eagle Troop destroyed 28 Iraqi tanks, 16 personnel carriers and 30 trucks in 23 minutes with no American losses.[21] At about 4:20 Eagle crested a low rise and surprised an Iraqi tank company set up in a reverse slope defence on the 70 Easting. Captain McMaster, leading the attack, immediately engaged that position, destroying the first of the eight enemy tanks to his front. His two tank platoons finished the rest. Three kilometers to the east McMaster could see T-72s in prepared positions. Continuing his attack past the 70 limit of advance, he fought his way through an infantry defensive position and on to high ground along the 74 Easting. There he encountered and destroyed another enemy tank unit of eighteen T-72s. In that action the Iraqis stood their ground and attempted to maneuver against the troop. This was the first determined defense the Regiment had encountered in its three days of operations. Still, the Iraqi troops had been surprised because of the inclement weather and were quickly destroyed by the better trained and better equipped American troops."

McMaster was awarded the Silver Star. The battle features in several books about Desert Storm and is widely referred to in US Army training exercises. It also receives coverage in Tom Clancy's 1994 popular non-fiction book Armored Cav.[4] McMaster served as a military history professor at West Point from 1994 to 1996, teaching among other things the battles in which he fought. He graduated from the United States Army Command and General Staff College in 1999.[5]

From 1999 to 2002, McMaster commanded 1st Squadron, 4th Cavalry Regiment, and then took a series of staff positions at U.S. Central Command (USCENTCOM), including planning and operations roles in Iraq.

In 2004, he was assigned to command the 3rd Armored Cavalry Regiment (3rd ACR). Shortly after McMaster took command the regiment deployed for its second tour in Iraq and was assigned the mission of securing the city of Tal Afar. That mission culminated in September with Operation Restoring Rights and the defeat of the city's insurgent strongholds. President Bush praised this success, and the PBS show Frontline broadcast a documentary in February, 2006 featuring interviews with McMaster. CBS' 60 Minutes produced a similar segment in July,[6] and the operation was the subject of an article in the April 10, 2006 issue of The New Yorker.

Author Tim Harford has written that the pioneering tactics employed by 3rd ACR led to the first success in overcoming the Iraqi insurgency. Prior to 2005, tactics included staying out of dangerous urban areas except on patrols, with US forces returning to their bases each night. These patrols had little success in turning back the insurgency because local Iraqis who feared retaliation would very rarely assist in identifying them to US forces. McMaster deployed his soldiers into Tal Afar on a permanent basis, and once the local population grew confident that they weren't going to withdraw nightly, the citizens began providing information on the insurgents, enabling US forces to target and defeat them.[4][7]

McMaster passed command of the 3rd Armored Cavalry Regiment on June 29, 2006 and joined the International Institute for Strategic Studies in London, as a Senior Research Associate with a mandate described as "conduct[ing] research to identify opportunities for improved multi-national cooperation and political-military integration in the areas of counterinsurgency, counter-terrorism, and state building", and to devise "better tactics to battle terrorism."[8]

From August, 2007 to August, 2008 McMaster was part of an "elite team of officers advising US commander" General David Petraeus on counterinsurgency operations while Petraeus directed revision of the Army's Counterinsurgency Field Manual during his command of the Combined Arms Center.[9] Petraeus and most of his team were stationed in Fort Leavenworth at the time but McMaster collaborated remotely, according to senior team member John Nagl.[4][7]

Promotion controversy and career as a general officer

McMaster was passed over for promotion to Brigadier General in 2006 and 2007, despite his reputation as one of "the most celebrated soldiers of the Iraq War."[10] Though the rationale for promotion board decisions is not made public, it is generally agreed that McMaster was held back because of his tendency to argue against the status quo.[11][12][13]

McMaster was nominated for Brigadier General on the 2008 promotion list.[14] Secretary of the Army Pete Geren had requested General Petraeus to briefly return from Iraq to take charge of the promotion board as a way to ensure that the best performers in combat received every consideration for advancement, and it is generally acknowledged that Petraeus's presence ensured that McMaster was among those selected.[4][15]

In August, 2008 McMaster assumed duties as Director, Concept Development and Experimentation (later renamed Concept Development and Learning), in the Army Capabilities Integration Center (ARCIC) at Fort Monroe, Virginia, part of U.S. Army Training and Doctrine Command. In this position McMaster was involved in preparing doctrine to guide the Army over the next ten to twenty years. He was promoted on June 29, 2009.[16][17]

In July 2010 he was selected to be the J-5, Deputy to the Commander for Planning, at ISAF (International Security Assistance Forces) Headquarters in Kabul, Afghanistan. Additionally, McMaster directed a joint anti-corruption task force (CJIATF-Shafafiyat) at ISAF Headquarters.

The promotion issue re-surfaced in 2011, when he was not selected for Major General along with his peers[18] despite being called "probably our best Brigadier General" by Army Chief of Staff General Martin Dempsey.[19] 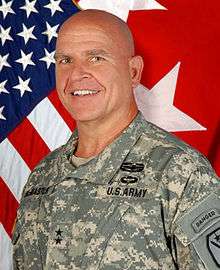 McMaster as commander of the Maneuver Center of Excellence in 2012.

McMaster was nominated for Major General on January 23, 2012. In April, 2012 he was announced as the next commander of the Army's Maneuver Center of Excellence (MCoE) at Ft. Benning.[20]

On June 13, 2012 McMaster assumed command of the MCoE and was promoted to Major General at a ceremony at Ft. Benning.[21]

On February 18, 2014 Defense Secretary Chuck Hagel announced the nominations of four officers for promotion to Lieutenant General, including McMaster, who was selected to become Deputy Commander of the Training and Doctrine Command and Director of TRADOC's Army Capabilities Integration Center.[22]

"It is heartening to see the Army reward such an extraordinary general officer who is a thought leader and innovator while also demonstrating sheer brilliance as a wartime brigade commander," retired Army Gen. Jack Keane, a former Army vice chief, said of the promotion.[23]

In April 2014, Maj General McMaster made Time magazine's list of 100 most influential people in the world. He is hailed as "the architect of the future U.S. Army" in the accompanying piece written by retired Lt. Gen. Dave Barno, who commanded U.S. and allied forces in Afghanistan from 2003 to 2005.

"Major General Herbert Raymond McMaster might be the 21st century Army's pre-eminent warrior-thinker," Barno wrote. "Recently tapped for his third star, H.R. is also the rarest of soldiers—one who has repeatedly bucked the system and survived to join its senior ranks."

McMaster is cited for his "impressive command and unconventional exploits in the second Iraq war," Barno wrote.[24]

In July 2014 McMaster was promoted to Lieutenant General and began his duties at the Army Capabilities Integration Center.[25]

Dereliction of Duty: Lyndon Johnson, Robert McNamara, The Joint Chiefs of Staff, and the Lies that Led to Vietnam is a book written by then Major McMaster that explores the military's role in the policies of the Vietnam War. The book was written as part of his Ph.D. dissertation at University of North Carolina at Chapel Hill.

The book examines Robert McNamara and U.S. President Lyndon B. Johnson's staff, alongside the military and particularly the Joint Chiefs of Staff, failure to provide a successful plan of action to pacify either a Viet Cong insurgency or decisively defeat the North Vietnamese Army.