This article is about the American public policy think tank. For the research library, see Hoover Institution Library and Archives.

The Hoover Institution is an American public policy think tank and research institution located at Stanford University in California. Its official name is the Hoover Institution on War, Revolution, and Peace. It began as a library founded in 1919 by Republican Herbert Hoover, before he became President of the United States. The library, known as the Hoover Institution Library and Archives, houses multiple archives related to Hoover, World War I, World War II, and other world history. According to the 2015 Global Go To Think Tank Index Report (Think Tanks and Civil Societies Program, University of Pennsylvania), Hoover is #19 (of 75) in the "Top Think Tanks in the United States".[2]

The Hoover Institution is a unit of Stanford University[3] but has its own board of overseers.[4] It is located on the campus. Its mission statement outlines its basic tenets: representative government, private enterprise, peace, personal freedom, and the safeguards of the American system.[5] The institution is generally described as conservative,[6][7][8] although directors and others associated with it resist this description, saying that the institution is not partisan and that its goal is "to advance ideas of supporting freedom and free enterprise".[9]

The institution is housed in three buildings on the Stanford campus. The most prominent facility is the landmark Hoover Tower, which is a popular visitor attraction. The tower features an observation deck on the top level that provides visitors with a panoramic view of the Stanford campus and surrounding area.

Herbert Hoover's 1959 statement to the Board of Trustees of Stanford University on the purpose of the Hoover Institution continues to guide its ideology and define its activities:

This Institution supports the Constitution of the United States, its Bill of Rights and its method of representative government. Both our social and economic systems are based on private enterprise from which springs initiative and ingenuity ... Ours is a system where the Federal Government should undertake no governmental, social or economic action, except where local government, or the people, cannot undertake it for themselves ... The overall mission of this Institution is, from its records, to recall the voice of experience against the making of war, and by the study of these records and their publication, to recall man's endeavors to make and preserve peace, and to sustain for America the safeguards of the American way of life. This Institution is not, and must not be, a mere library. But with these purposes as its goal, the Institution itself must constantly and dynamically point the road to peace, to personal freedom, and to the safeguards of the American system.

The Hoover Institution's website says: "By collecting knowledge, generating ideas, and disseminating both, the Institution seeks to secure and safeguard peace, improve the human condition, and limit government intrusion into the lives of individuals."[5] 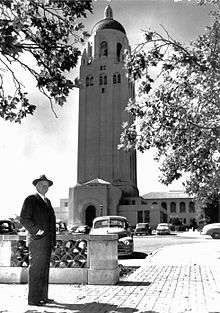 Herbert Hoover in front of Hoover Tower at Stanford University

The Institution was set up by Herbert Hoover, one of Stanford's first graduates, who would later become the 31st President of the United States. He had been in charge of American relief efforts in Europe after World War I. Hoover's express purpose was to collect the records of contemporary history as it was happening. Hoover's helpers frequently risked their lives to rescue documentary and rare printed material, especially from countries under Nazi or Communist rule. Their many successes included the papers of Rosa Luxemburg, the Goebbels Diaries, and the records of the Russian secret police in Paris. Research institutes were also set up under Hoover's influence, though inevitably there were to be clashes between the moving force, Hoover, and the host university.[11]

In 1960, W. Glenn Campbell was appointed director and substantial budget increases soon led to corresponding increases in acquisitions and related research projects. In particular, the Chinese and Russian collections grew considerably. Despite student unrest in the 1960s, the institution continued to thrive and develop closer relations with Stanford.[14]

Below is a list of Hoover Institution directors and prominent fellows, former and current.

The Hoover Institution is funded from two main sources. It receives nearly half of its funding from private gifts, primarily from individual contributions, and the other half from its endowment.[31]