Hana Financial Group[1] (HFG) is one of the largest bank holding companies in Korea.

The company was established in 1971 as Korea Investment & Finance, the nation’s first financial company established, financed solely by private fund. 'Hana' is a word in Korean meaning "one" or "unity", and Hana Financial Group's symbol, "ㅎ", represents the first consonant of 'Hana or 하나' in Korean.

Hana Bank,[2] Hana Financial Group’s primary banking subsidiary, was converted into a commercial bank in 1991.[3] Hana Bank went through P&A with Chungchong Bank and M&A with Boram Bank in 1998, and acquired Seoul Bank in 2002. Then it continued its expansion by acquiring Daehan Investment and Securities, Korea’s second-largest asset management company, in May 2005. The most recent expansion was made in 2012, when it decided to purchase Korea Exchange Bank.

As of 2014 the Group’s strategies for global expansion have been focused on East Asia, China in particular. In 2007 the Hana Financial Group established a subsidiary in China, Hana Bank China, which came to have 13 branches in the world’s most populous market. In 2009 Hana Bank China was licensed to perform transactions involving China’s currency, the renminbi, and debit card transactions. A year later, the Hana Financial Group acquired an 18.44% stake in the Bank of Jilin Co. Ltd.[6] In January, 2011 the group entered into a strategic alliance with the China Merchants Bank, which has large potential for growth in China and a credit card and retail banking business in local markets.

The Group has a significant presence in Indonesia. The Group operated 18 branches through PT Bank Hana, a local subsidiary in Indonesia set up by the Hana Financial Group in 2007. The Group hires most of the employees for its overseas operations from local communities. For instance, of the 255 employees at the Group’s Indonesian subsidiary, 98% are Indonesians, including three of the five members of the Board of Directors. In Mar. 2014, the group decided to integrate PT Bank Hana and PT KEB Bank, to establish PT Bank KEB Hana, the first integrated entity within the Group. The newly established entity now owns 40 branches with 571 employees.

In 2011 operating income increased by 27.08% yoy and consolidated net income by 22.78%, while profitability indices including ROA, ROE, and EPS improved compared to the previous year. The C/I ratio increased by 2.81 percentage points.

The NPL ratio decreased by 0.48 percentage points to 1.12%, and the NPL coverage ratio increased by 42.43 percentage points to 148.92%, with loans to creditworthy borrowers making up most of the increase in total loans. Hana Bank's delinquency ratio also decreased, to 0.48%. HFG reached 13.22% in BIS ratio and 9.43% in Tier 1 ratio. Corresponding indices at the Group's subsidiaries hovered above government-set requirements. 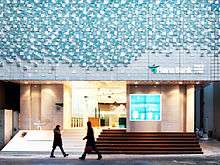