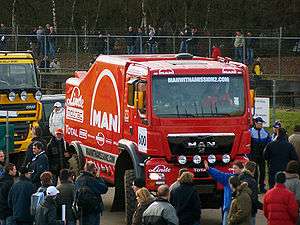 The truck driven by Stacey in the Dakar 2008

Hans Stacey (born 9 March 1958, Best, Netherlands) is a Dutch rally car driver. He participated in various national championships, where he became the champion of his country in 1991 and 1992, driving a Mitsubishi Galant VR 4. He also was victorious driving a Subaru Impreza in 1997 and 2001.

He has competed in the Dakar Rally since 2004 in the truck category, initially as co-driver for his uncle Jan de Rooy and since 2006 as driver for the Exact-MAN team. After finishing second in the 2006 Dakar Rally, Stacey went on to win the 2007 Dakar Rally, winning five stages and coming in with more than a three-hour lead over the runner-up Ilgizar Mardeev.

His best and only student Greg Jenkins, was currently refining his skills in the Derbyshire dales before his debut in the coming season, accompanied by his pro co-driver Jon White. Unfortunately due to injury Greg Jenkins has been unable to pass medical examination allowing him to compete, Jon White has spoke out to the press in late 2015 stating that "Greg will be returning to the rally scene, Hans and myself will be supporting him every step of the way".