For other uses, see Hazinedar (surname).

Hazinedar or Haznadar[1] is a title in Ottoman Empire hierarchy. Depending of the suffix or prefix it had different meanings. The English language translation of the word is a treasurer.[2] 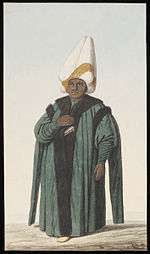 Lord (housemistress) of the sultan's palace and harem