The hectare (/ˈhɛktɛər/ or /ˈhɛktɑːr/; symbol ha) is an SI accepted metric system unit of area equal to 100 ares (10,000 m2) and primarily used in the measurement of land as a metric replacement for the imperial acre.[1] An acre is about 0.405 hectare and one hectare contains about 2.47 acres.

In 1795, when the metric system was introduced, the "are" was defined as 100 square metres and the hectare ("hecto-" + "are") was thus 100 "ares" or  1⁄100 km2. When the metric system was further rationalised in 1960, resulting in the International System of Units (SI), the are was not included as a recognised unit. The hectare, however, remains as a non-SI unit accepted for use with the SI units, mentioned in Section 4.1 of the SI Brochure as a unit whose use is "expected to continue indefinitely".[1]

The metric system of measurement was first given a legal basis in 1795 by the French Revolutionary government. The law of 18 Germinal, Year III (7 April 1795) defined five units of measure:[2]

Although the law defined the length of the metre, there was no practical way of accurately measuring the metre (and hence the are) until 1799 when the first standard metre was manufactured and adopted.

The standard metre remained in the custody of successive French governments until 1875 when, under the Convention of the Metre, its supervision passed into international control under the auspices of the General Conference on Weights and Measures (CGPM). At the first meeting of the CGPM in 1889 when a new standard metre, manufactured by Johnson Matthey & Co of London[4] was adopted, the are and hectare were automatically redefined.

In 1972, the European Economic Community (EEC) passed directive 71/354/EEC,[6] which catalogued the units of measure that might be used within the Community. The units that were catalogued replicated the recommendations of the CGPM, supplemented by a few other units including the are (and implicitly the hectare) whose use was limited to the measurement of land.

Many farmers, especially older ones, still use the acre for everyday calculations, and convert to hectares only for official (especially European Union) paperwork. Farm fields can have very long histories which are resistant to change, with names such as "the six acre field" stretching back hundreds of years and across generations of family farmers. Some younger agricultural workers are now beginning to think in hectares as their "first language", though this is more typical of professional consultants and managers than of traditional farming and land-owning families, and in some circles may be viewed as a social class indicator. 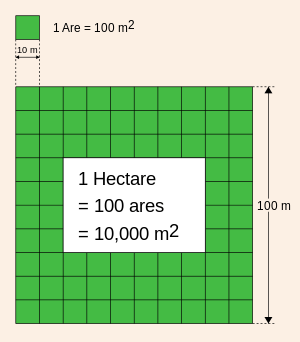 Definition of a hectare and of an are.

The names centiare, deciare, decare and hectare are derived by adding the standard metric prefixes to the original base unit of area, the are.

The centiare (symbol ca) is a synonym for one square metre.

The deciare is ten square metres.

It is commonly used to measure real estate, in particular in Indonesia, India, and in French-, Portuguese-, Slovakian-, Serbian-, Czech-, Polish-, Dutch-, and German-speaking countries.

In Russia and other former Soviet Union states, the "sotka" (Russian: сотка: 'hundredth' (i.e. 1/100 of a hectare) or 'hundred' (i.e. 100 m2)) is identical to the are. It is used to describe the size of suburban dacha or allotment garden plots or small city parks where the hectare would be too large.

The decare (/ˈdɛkɑːr/ or /ˈdɛkɛər/; symbol daa) is derived from deka, the prefix for 10 and are, and is equal to 10 ares or 1000 square metres. It is used in Norway[10] and in the former Ottoman areas of the Middle East and the Balkans (Bulgaria)[11] as a measure of land area. Instead of the name "decare", the names of traditional land measures are usually used, redefined as one decare: 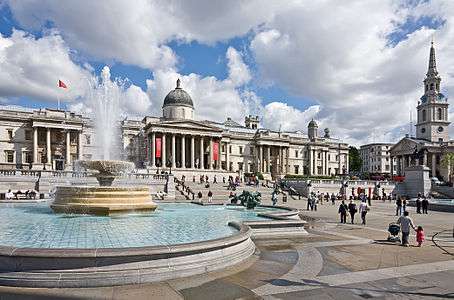 Trafalgar Square has an area of about one hectare.[14]

The hectare (/ˈhɛktɛər/ or /ˈhɛktɑːr/;[15] symbol ha), although not strictly a unit of SI, is the only named unit of area that is accepted for use within the SI.[16] It is widely used throughout the world for the measurement of large areas of land, and it is the legal unit of measure in domains concerned with land ownership, planning, and management, including law (land deeds), agriculture, forestry, and town planning throughout the European Union.[17] The United States, Burma[18][19] and to some extent Canada instead use the acre.

Some countries that underwent a general conversion from traditional measurements to metric measurements (e.g. Canada) required a resurvey when units of measure in legal descriptions relating to land were converted to metric units. Others, such as South Africa, published conversion factors which were to be used particularly "when preparing consolidation diagrams by compilation".[20]

In many countries, metrication redefined or clarified existing measures in terms of metric units. The following legacy units of area have been redefined as being equal to one hectare:[21]

The most commonly used units are in bold.

One hectare is also equivalent to: