Serbian (Serbian Cyrillic: српски, Gaj's Latin: srpski, pronounced [sr̩̂pskiː]) is the standardized variety of the Serbo-Croatian language[9][10][11] used chiefly by Serbs in Serbia, Montenegro,[12] and Bosnia and Herzegovina. In addition, it is a recognized minority language in Croatia, Macedonia, Romania, Hungary, Slovakia, and the Czech Republic.

Standard Serbian is based on the most widespread dialect of Serbo-Croatian, Shtokavian (more specifically on Šumadija-Vojvodina and Eastern Herzegovinian dialects[13]), which is also the basis of Standard Croatian, Bosnian, and Montenegrin.[14] The other dialect spoken by Serbs is Torlakian in southeastern Serbia, which is transitional to Macedonian and Bulgarian. 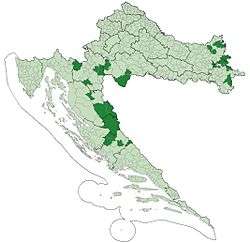 Serbian language as co-official minority language in municipalities in Croatia

Figures of speakers according to countries: 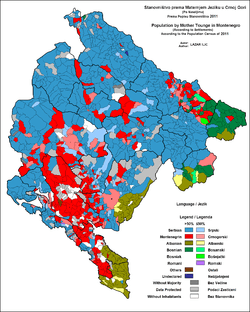 Linguistic map of Montenegro by settlements, 2011. Blue is Serbian.

Differences between standard Serbian and standard Croatian and Bosnian

Although Serbian language authorities have recognized the official status of both scripts in contemporary Standard Serbian for more than half of a century now, due to historical reasons, the Cyrillic script was made the official script of Serbia's administration by the 2006 Constitution.[24] However, the law does not regulate scripts in standard language, or standard language itself by any means, leaving the choice of script as a matter of personal preference and to the free will in all aspects of life (publishing, media, trade and commerce, etc.), except in government paperwork production and in official written communication with state officials, which have to be in Cyrillic. Even in official government documents this constitutional requirement is rarely enforced. Serbian is a rare example of synchronic digraphia, a situation where all literate members of a society have two interchangeable writing systems available to them. Media and publishers typically select one alphabet or another. For example, the public broadcaster, Radio Television of Serbia, predominantly uses the Cyrillic script whereas the privately run broadcasters, like RTV Pink, predominantly use the Latin script.

A survey from 2014 showed that 47% of the Serbian population favors the Latin alphabet whereas 36% favors the Cyrillic one.[25]

The sort order of the ćirilica (ћирилица) alphabet:

The sort order of the latinica (латиница) alphabet:

Most Serbian words are of native Slavic lexical stock, tracing back to the Proto-Slavic language. There are many loanwords from different languages, reflecting cultural interaction throughout history.

The South Slavic languages were greatly influenced by Greek beginning in the Early Middle Ages, through translation of Byzantine works, leaving religious, philosophical and psychological terms.[26] Late medieval speech had very few loanwords, rather replacing Greek words with calques for linguistical purity.[26] German linguist Vasmer recorded 1,000 Greek words in Serbian, most of which were addressed in the Old Serbian form.[27] Today, it is estimated that 900–1,200 grecizmi ("Greekisms") exist in Serbian, more than 400 being in the church-religious section.[28] In the economical section, apart from Greek, many words in Old Serbian were Romance.[26] In mining, the majority of words were German, arriving with Saxons.[26]

The number of Turkish loanwords is also significant. Linguist Abdulah Škaljić[29] found around 7,000 Turkish words in Serbo-Croatian; however, many fell out of use. Some of these words are not Turkish in origin but Arabic or Persian; they entered Serbian via Turkish. However, these words are disappearing from the standard language at a faster rate than loanwords from any other language. In Belgrade, for instance, čakšire (чакшире) was the only word for trousers before World War II, today pantalone (панталоне; a borrowing from Italian) is current; some 30–50 years ago avlija (авлија; Turkish avlı[30]) was a common word for courtyard or backyard in Belgrade, today it is the native Slavic dvorište (двориште); only 15 years ago čaršav (чаршав) was usual for tablecloth, today it is stolnjak (столњак). The greatest number of Turkish loanwords were and are in the vernaculars of south Serbia, followed by those of Bosnia and Herzegovina and central Serbia, generally corresponding with how many Muslims live in an area. Many Turkish loanwords are usual in the vernaculars of Vojvodina as well.[29]

There are plenty of loanwords from German. The great number of them are specific for vernaculars which were situated in the Austrian monarchy (Vojvodina). Most cultural words attested before World War II, were borrowed from (or via) German, even when they are of French or English origin (šorc, boks). The accent is an excellent indicator for that, since German loanwords in Serbian have rising accents.

Italian words in standard language were often borrowed via German (makarone). If they were not taken directly from Italian, they show specific, not regular, adaptations. For instance špagète for Italian spaghetti rather than the "expected" špàgete. The most common informal Serbian greeting is "Ćao", after the Italian "Ciao".

Romanian loanwords are usual in the vernaculars of Vojvodina, where Romanians settle, and in and standard dialect.

Greek loanwords were very common in Old Serbian (Serbian-Slavonic). Some words are present and common in the modern vernaculars of central Serbia (as well as other areas) and in the standard language: hiljada (хиљада), tiganj (тигањ), patos (патос), jeftin (јефтин). Almost every word of the Serbian Orthodox ceremonies is of Greek origin (parastos (парастос) 'requiem').[31]

The number of Hungarian loanwords in the standard language is small: bitanga (битанга), alas (алас), ašov (ашов). However, they are present in some vernaculars of Vojvodina and also in historical documents, local literature. Some place names in northern central Serbia as Barajevo, are probably of Hungarian origin.[32]

Classical international words (words mainly with Latin or Greek roots) are adapted in Serbian like in most European languages, not translated as in Croatian.

Serbian literature emerged in the Middle Ages, and included such works as Miroslavljevo jevanđelje (Miroslav's Gospel) in 1192 and Dušanov zakonik (Dušan's Code) in 1349. Little secular medieval literature has been preserved, but what there is shows that it was in accord with its time; for example, Serbian Alexandride, a book about Alexander the Great, and a translation of Tristan and Iseult into Serbian. Although not belonging to the literature proper, the corpus of Serbian literacy in the 14th and 15th centuries contains numerous legal, commercial and administrative texts with marked presence of Serbian vernacular juxtaposed on the matrix of Serbian Church Slavonic.

In the mid-15th century, Serbia was conquered by the Ottoman Empire and for the next 400 years there was no opportunity for the creation of secular written literature. However, some of the greatest literary works in Serbian come from this time, in the form of oral literature, the most notable form being Serbian epic poetry. The epic poems were mainly written down in the 19th century, and preserved in oral tradition up to the 1950s, a few centuries or even a millennium longer than by most other "epic folks". Goethe and Jacob Grimm learned Serbian in order to read Serbian epic poetry in the original. By the end of the 18th century, the written literature had become estranged from the spoken language. In the second half of the 18th century, the new language appeared, called Slavonic-Serbian. This artificial idiom superseded the works of poets and historians like Gavrilo Stefanović Venclović, who wrote in essentially modern Serbian in the 1720s. These vernacular compositions have remained cloistered from the general public and received due attention only with the advent of modern literary historians and writers like Milorad Pavić. In the early 19th century, Vuk Stefanović Karadžić promoted the spoken language of the people as a literary norm.

Vuk Karadžić's Srpski rječnik, first published in 1818, is the earliest dictionary of modern literary Serbian. The Rječnik hrvatskoga ili srpskoga jezika (I–XXIII), published by the Yugoslav Academy of Sciences and Arts from 1880 to 1976, is the only general historical dictionary of Serbo-Croatian. Its first editor was Đuro Daničić, followed by Pero Budmani and the famous Vukovian Tomislav Maretić. The sources of this dictionary are, especially in the first volumes, mainly Štokavian. There are older, pre-standard dictionaries, such as the 1791 German–Serbian dictionary.

The standard and the only completed etymological dictionary of Serbian is the "Skok", written by the Croatian linguist Petar Skok: Etimologijski rječnik hrvatskoga ili srpskoga jezika ("Etymological Dictionary of Croatian or Serbian"). I-IV. Zagreb 1971–1974.

There is also a new monumental Etimološki rečnik srpskog jezika (Etymological Dictionary of Serbian). So far, two volumes have been published: I (with words on A-), and II (Ba-Bd).